Release Blitz for Good With His Hands by Lucy Felthouse 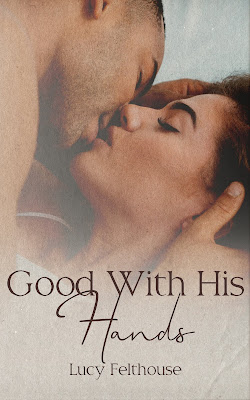 Good With His Hands
by Lucy Felthouse (@cw1985) #romance #steamy #shortstory
Blurb
Layla is enjoying a beautiful moorland walk in the English countryside when suddenly, clouds start to roll in. The weather was forecast to be fine all day, so Layla is woefully unprepared when the heavens open and her visibility is reduced to next to nothing. Trying hard not to panic, she carefully makes her way towards a remote hut she spotted before the fog descended. When she arrives, though, she discovers park ranger Stuart already there, and luckily for her, he’s much more prepared than she is, and they soon find a way to pass the time until the storm blows over.
Note: Good With His Hands was previously published in the Down and Dirty boxed set. 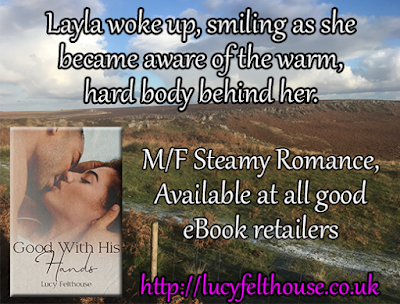 Buy links
Amazon: http://mybook.to/goodwithhishands
B&N: https://www.barnesandnoble.com/w/good-with-his-hands-lucy-felthouse/1129960024
iBooks: https://itunes.apple.com/us/book/good-with-his-hands/id1445209735?mt=11
Kobo: https://www.kobo.com/ca/en/ebook/good-with-his-hands-15
Smashwords: https://www.smashwords.com/books/view/910076?ref=cw1985
*****
Excerpt:
Anticipation seeped into Layla’s body, increasing with every second that ticked by. Each handhold she groped for, each push off with her feet brought her that bit closer to the moorland plateau she’d been wanting to explore ever since she’d seen photos of it in a Facebook group a few weeks ago. She was a keen hiker—or walker, she’d never really understood what the difference was between the two—but she’d always stuck to places she knew well, or had at least visited a couple of times before, mainly because she always walked alone, and getting lost was bad enough without doing it by yourself.
But one Sunday evening, after a flurry of yet more stunning photographs of the area had been uploaded to the group, Layla made up her mind. The following Sunday, she would join the seemingly scores of people that headed up to the dramatic-looking gritstone edge in Derbyshire’s Peak District every weekend, no matter the weather. Hikers, climbers, fell runners… they all raved about the place, despite the crowds. And if she did get lost, well, she’d just ask one of them for directions. No problem. Then, providing it was indeed as amazing as the photo-uploaders proclaimed it to be, she’d add it to her list of regular haunts. It’d make a refreshing change from her usual low-level trail walks.
Now she was beginning to understand what all the fuss was about, and she wasn’t even at the top yet. After leaving the relative familiarity of the car park, she’d trekked up a slight incline through some dense woods—surprised to pass only one or two small groups of people on the way. She’d expected it to look like London’s Oxford Street but with outdoorsy types in hefty boots and backpacks instead of shoppers with umbrellas and carrier bags. The moment she’d stepped from the shadow of the woods, the landscape had opened up in front of her and she’d got a real sense of how special it was. Then she’d glanced up and to her right and, taking in the height of the edge she had yet to climb, realised she hadn’t seen the half of it yet.
With one last push to get her onto a particularly large boulder, then a small step, she was there. On the gritstone edge, the moorland plateau—whatever you wanted to call it. As she took a couple of tentative steps forward and looked around, she decided she wanted to call it heaven. It was like nowhere she’d ever been before—so removed from everyday life that she was half convinced she’d stepped onto the moon, except it was unmistakably England. Wild, untamed, rugged, but England nonetheless. How had she never been up here before? And were there more places like it? She suddenly felt like the worst kind of ignorant city dweller—her walks up until now had made a mockery of wearing walking boots. She may as well have done it in flip flops.
She turned at the sound of voices behind her, and moved aside to let a group of three men in their early twenties pass. They had enormous, weirdly-shaped bags strapped to their backs, and yet strode along—exchanging smiles and nods with her when they drew level—as though their burdens weighed nothing.
Layla shook her head incredulously and started to follow in their footsteps. She didn’t need to consult her walk instructions yet—there was only one path, deliberately keeping footfall to a dedicated area for conservation purposes, according to a snippet of text she remembered reading on her printout. The trail stayed close to the edge—not so close as to be dangerous, but close enough to afford the most amazing views. The ground beneath her feet was made up of mud, rough grasses, rocks and boulders in shades of grey, brown, and black, scrubby bushes, and what she suspected was heather. To her left, the stunning countryside went on for as far as the eye could see, with delightfully twisted trees in the foreground, followed by brown and green fields, woodlands, moorlands, and more fields, broken up only very occasionally by a road—often only identifiable by the moving glint of light that passed along them—vehicles highlighted by the reflection of the sun off their metalwork. It’d be incredibly easy to forget civilisation even existed while she was up here.