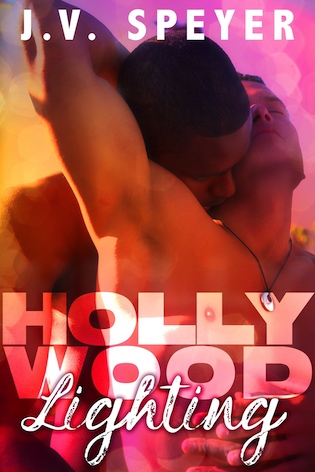 A rowdy superstar in danger. His resentful new guardian. It’s hate at first sight until love takes an unexpected encore.
Closeted actor Owen fears failure and betrayal. So after he’s stabbed by a crazy fan, the movie studio offers a hunky bodyguard for protection. Suspicious that the ripped security man is just a gossip-seeking plant, he pushes back at his bulging biceps, ignoring the chemistry.
Newly retired SEAL Jamal is having a hard time adjusting to civilian life. Reluctantly taking a Hollywood job for a bad boy with tight abs, he’s sure the star is simply paranoid. But when he discovers the sexy celebrity is in serious jeopardy, he doesn’t hesitate to jump into action mode.
As the peril hits closer to home, Owen finds himself falling for the handsome hero fighting for his life. And as the threats intensify, Jamal fears he might lose the man he has come to love.
Will Owen and Jamal go down in a catastrophic climax, or will they star in their own happy ending?
Hollywood Lighting is the red-hot first book in the Bodyguards M/M contemporary romance series. If you like tortured heroes, intense predicaments, and steamy affairs, then you’ll adore J. V. Speyer’s tale of LGBT passion.
Buy Hollywood Lighting to let desire take centerstage today!

Goodreads / Amazon
—
EXCERPT:
Owen sat back in his chair and tried not to fidget. He didn’t want to come off as bored, even if he didn’t actually see the point of being where he was. He had two other projects going on right now, both of which could have moved faster through production if he were on set. Instead he was here, cooling his heels and waiting for Ryan to finish a scene that should have been done three hours ago.
“Cut!” Drew threw his megaphone into Jamal’s arms. Jamal wasn’t expecting it, but he was a SEAL or had been, anyway. He caught the thing easily. Owen tried not to moon about it.
“Ryan, we’ve been over this fifteen times. For fifteen takes. Owen’s been hanging out here for three hours he could have spent working on his other projects, because we were supposed to have been working on his scenes by now. The only way we can make all of this work is by sticking to the schedule. That means we can’t run a scene fifteen times because you don’t know your right from your left.”
Ryan didn’t look like a robot up on the set. He looked like a collection of parts made from children’s modeling clay, badly stuck together and then half-baked. If parts started falling off, Owen wouldn’t be surprised in the least.
“‘Scuse me if I don’t prioritize Pretty Boy’s fucking side gigs.” Ryan staggered over to his chair, on Jamal’s other side, and grabbed for his water bottle. He chugged half of it down, threw it toward the wall, and turned to a pretty little blonde PA who’d been lurking nearby. “Sandra, darlin’, why don’t you nip into my trailer and grab me another one of these?”
The PA, who might or might not have been named Sandra, winked at Ryan and sauntered off toward the trailers. Owen turned back to his phone and made his best effort not to seem at all interested in Ryan’s going on. Ryan’s drunkenness was not news.
Drew took a deep breath. “What Owen is or is not doing with his time isn’t the issue. The fact is, the entire crew is here longer than they need to be because you can’t remember your lines. You can blame Owen’s side projects, you can blame Mercury retrograde, you can blame the writing, but at the end of the day everyone else manages to get the job done. You’re the only one consistently holding up production. You need to get your shit together, Ryan. You’ve been in the business long enough to be more professional than this. You should have more respect for the crew if not your cast mates.”
Ryan staggered, and then he lurched. “Like anyone could have any respect for that prima donna. Look at him, sitting there on his phone. Probably coordinating some kind of drug deal right now.”
Owen glanced at his texts. He’d turned off notifications simply because he didn’t have anyone to text him anything important. Silvia didn’t contact him often, thinking he was a drug-addled degenerate thanks to the gossip sites and their shared parent. Izzy couldn’t contact him, and Dan would call or email. Chris was usually on site with him.
No one else would bother. He might hope Jamal would contact him someday, especially after that amazing night before production started on Hamlet. He wasn’t going to count on it, though.
As he scrolled through the usual crap – mostly automated junk – one message caught his eye. His stepmother’s parents, Linda and George, lived up in Colorado. Silvia had managed to get away from their dad and gone to live with them maybe a year ago. Owen got along a little bit better with all three of them now that they understood what was going on with their son in law better, but he still wouldn’t call their relationship one of trust and affection. They didn’t reach out, as a general rule.
When he saw their number in his incoming texts, he froze. Were they looking for money? Was something wrong with Silvia?
The only way to find out was to click on the text.
On set, Drew’s face had gone bright red. “I don’t care if he’s personally taking over for El Chapo, he knows his lines and he’s where he’s supposed to be when he’s supposed to be there. It’s more than I can say for you.”
Owen opened the text. There wasn’t a lot to read, but the Carsons hadn’t ever been the most verbose people. Not with Owen, anyway. Your father challenged us for custody of Silvia. He won, effective immediately. He took her back to Orange County today. There were no further messages.
Owen’s stomach sank. Silvia hadn’t confided in him. They hadn’t been close, but Owen knew what kind of man his father was. If Silvia had fled to Colorado, he’d already started pushing her to start a “show biz” career. And his contacts weren’t on the lighter side of Hollywood – not anymore.
He typed out a response. Thanks for letting me know. You may hear from the LAPD. Please cooperate with them. There’s not a lot I can do because of the restraining order, but I’m going to do everything I can.
On set, Ryan spun around to try to get a good look at Drew. His balance wasn’t able to keep up with his intentions, and he pitched forward off the sound stage and onto the ground.


J J. V. Speyer writes LGBTQ+ romance novels heavily flavored with suspense, mystery, and adventure. She has lived in upstate New York and rural Catalonia before making the greater Boston, Massachusetts area her permanent home. She currently lives just south of Boston in a house old enough to remember when her town was a tavern community with a farming problem.
J. V. finds most of her inspiration from music. Her tastes run the gamut from traditional to industrial and back again. When not writing is a baseball fan, a hockey mom, and a devotee of all things weird and creepy about New England.
J. V. can be found on Twitter at @JVSpeyer, or on Facebook at https://www.facebook.com/JVSpeyerAuthor