Liana Alvarez and The Drop-Dead Temple of Doom

You never know where life is going to take you. I was reminded of that one Sunday morning quite recently, as I was sitting in a lounge chair on my back deck reading a Somerset Maugham novel on my ereader. That was when Life struck.

You never know about proclamations, either. I like to say I’m never going anywhere I can’t plug in my hot rollers. Or where there don’t have a Starbucks. So, where do I wind up not eight hours later on that Sunday? The wild and steamy jungles of Guatemala. Not only was there no electricity or Starbucks, there were exotic animals, such as large cats, wandering around. And I don’t mean the domestic kind.

Now I like adventure as much as the next person. Well, not really. True, I am the in-house investigator for the family-owned detective agency, Discretionary Inquiries, and I’ve stumbled over a dead body or two in my time. But my idea of roughing it is sitting in an air-conditioned office trying to sort out who is stealing software, hardware, intellectual property or venture capital funding. You know, Silicon Valley’s bread and butter.

But I guess it was only to be expected that when someone in the family went missing, they’d call on me. So off I went to the land of the ancient Mayans. Yes, I was in El Mirador Basin searching for a cousin’s missing spouse, my own hubby and mother in tow. Bringing along hubby was definitely my idea. First off, he is a former Navy SEAL. He can handle himself anywhere. As for bringing along mommy, you try telling Lila Hamilton-Alvarez she is not going somewhere when she says she is. Not going to happen.

But I have to say, my mother did come in handy. She knows her way around archaeological stuff and she certainly knew how to keep a miscreant howler monkey in line. But even primates know not to mess around with my mother. She may look and act like a lady, but beneath that cool, blonde exterior are the chops of a prize fighter. So between poison darts, missing artifacts, ancient Mayan curses, and earthquakes, I was glad she was by my side.

But don’t tell her that.

About The Drop-Dead Temple of Doom 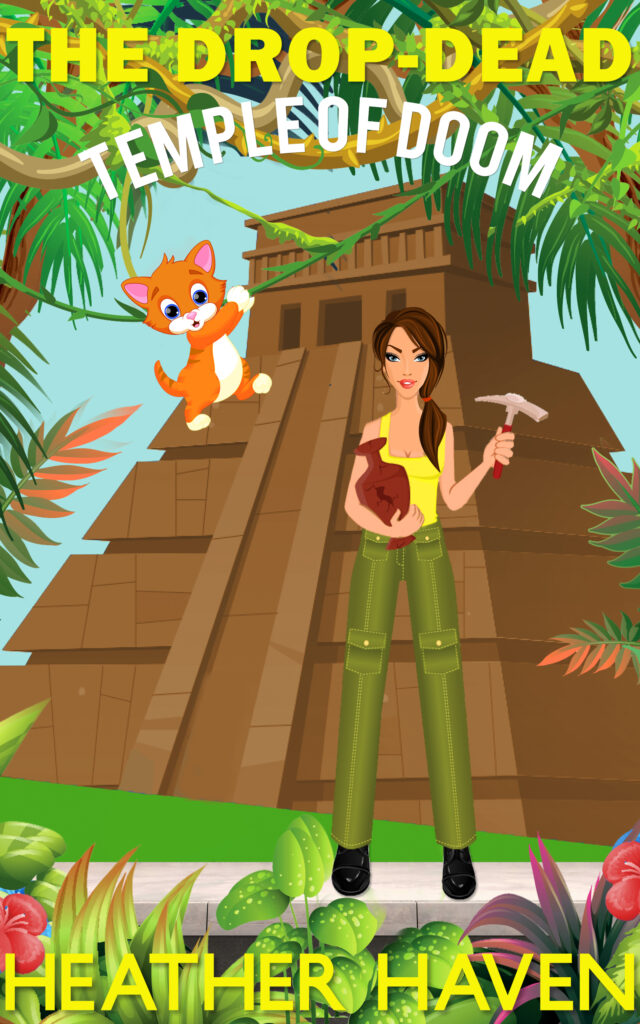 The Drop-Dead Temple of Doom
(The Alvarez Family Murder Mysteries)

A MOUTHFUL OF POISON FROG…. WHERE’S THE LAW OF THE JUNGLE?

Ace detective Lee Alvarez is perfectly cozy at home with her cats when she and her former Navy SEAL husband receive a panicky call from JJ, an archeologist cousin, who’s on assignment deep in the Guatemalan jungle. The news? JJ is pregnant-- and the father of her child has gone missing in the wilderness. The site director won’t let JJ call the police, so she asks Lee to travel to the jungle and track down her missing man.

Begging for help from Lee Alvarez sure makes sense--Lee’s family runs Discretionary Inquiries, a ritzy Silicon Valley P.I. firm. Lee is the star detective, her Uncle Tio’s on staff as the genius chef, and Lee’s brother, Richard, is a whiz at all things technology. Not to mention the presence of Lee’s very high class, upscale, and frankly scary mother Lila. Who--by the way—steamrolls her way onto Lee’s jungle trip.

A beleaguered Lee, the judgmental and prissy Lila, and Lee’s gorgeous SEAL husband (turned partner-in-crime) depart on the adventure of a lifetime, perfect for cozy mystery armchair travelers. And, once in the jungle, the already-gripping story takes a grisly turn: the three investigators have barely arrived in the lush, verdant wilderness when they discover a dead man--the assistant to JJ’s missing husband--dressed in traditional Mayan warrior garb with a poisonous frog crammed in his mouth.

Fans of cozy authors like CeeCee James, Hope Callaghan, and of course Janet Evanovich, will discover a new favorite series! Lee’s gang will also appeal to lovers of female PIs, especially those with lots of colorful friends and relatives, like Linda Barnes’ Carlotta Carlyle and Lisa Lutz’s Izzy Spellman. A near certainty: If you like THE SPELLMAN FILES, you’ll love the Alvarez family!

REVIEW
*I received a free copy of this book which I voluntarily chose to write an honest review for.
This is a new series for me but I found it highly enjoyable. We follow Lee a P.I. with some fantastic skills. Everyone knows she always finds what she is looking for. She is enjoying a break at home with her ex Navy SEAL husband when he receives a call from his panicked cousin JJ. She is in a remote area of the Amazon jungle at a dig site for her job when het husband comes up missing. She begs Lee to come look for him. After some discussion she agrees so they head that way with her take charge mother along for the ride. As soon as they hit the ground she can tell something is going on with the group but doesn't let that deter her. After some pointed questions, odd events, and some dicey situations she figures it all out just in time. With strong characters, a well depicted location, and plenty of clues the story really comes together in a way that will keep the readers attention making for a cozy you can't put down. Lee is a delight to follow. Perfect for cozy fans. I totally loved it so I give it 5/5 stars.

After studying drama at the University of Miami in Miami, Florida, Heather went to Manhattan to pursue a career. There she wrote short stories, novels, comedy acts, television treatments, ad copy, commercials, and two one-act plays, produced at several places, such as Playwrights Horizon. Once she even ghostwrote a book on how to run an employment agency. She was unemployed at the time.

One of her first paying jobs was writing a love story for a book published by Bantam called Moments of Love. She had a deadline of one week but promptly came down with the flu. Heather wrote "The Sands of Time" with a raging temperature, and delivered some pretty hot stuff because of it. Her stint at New York City’s No Soap Radio—where she wrote comedic ad copy—help develop her longtime love affair with comedy.

She has won many awards for the humorous Alvarez Family Murder Mysteries, Persephone Cole Vintage Mysteries, and Corliss and Other Award Winning Stories. However, her proudest achievement is winning the Independent Publisher Book Awards (IPPY) 2014 Silver Medal for her stand-alone noir mystery, Murder Under the Big Top.

As the real-life daughter of Ringling Brothers and Barnum and Bailey circus folk, she was inspired by stories told throughout her childhood by her mother, a trapeze artist and performer. The book cover even has a picture of her mother sitting atop an elephant from that time. Her father trained elephants. Heather brings the daily existence of the Big Top to life during World War II, embellished by her own murderous imagination.