Release Blitz & Giveaway for Playing it Safe by Amy Andrews 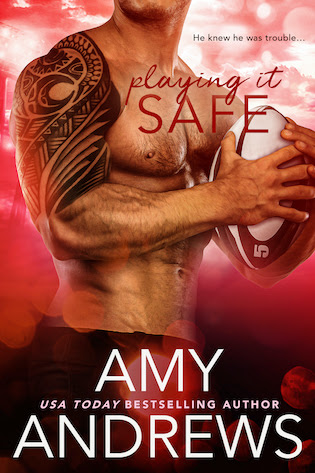 Donovan Bane loves playing rugby for the Sydney Smoke. And if that means he has to keep his sexuality a secret, that’s a sacrifice he’s prepared to make. At least until after he retires, anyway. He doesn’t want to be the first pro rugby player in Australia to officially come out while still playing. The team doesn’t need the media shit storm and he’d rather be known for his footy skills. Which means no dating, no relationships, no sex. Nothing but playing ball.

Until one man suddenly changes everything…

Beckett Stanton is out and proud—and not looking for a guy who isn’t. Been there, done that, complete disaster. Unfortunately, on the first day of his new job working for the Sydney Smoke, he locks eyes with Donovan Bane and he’s a goner. Big, gruff, and athletic isn’t usually Beck’s type, but for some reason this man is ticking all his boxes. And it’s clear the feeling is mutual. It’s also clear that Donovan is not out, and doesn’t plan to be anytime soon. Still, Beck can’t resist being the man to show Donovan everything he’s been missing.

For the first time, Donovan doesn’t play it safe and allows himself to indulge in things with Beck he knows he can’t have. But when their relationship gets serious, he knows he has to choose between the career he loves and the man he loves, because how can he possibly have both?

“Why are you giving yourself early wrinkles?” He lifted his hand then, smoothing a finger along the furrows in Donovan’s forehead.

It was such a light touch yet Donovan felt it everywhere. Just as he felt the spicy accents of Beckett’s cologne wafting over him on a warm pillow of pheromone-laden air.

“Because…I don’t know how to…do this.”

“This?” Beckett’s hand fell to his side.

“Donovan…” Beckett’s warm chuckle, the way he always called him by his full name, set up home inside Donovan’s belly and lit a fire. “Being gay isn’t something you do. It’s something you are.” Beckett tapped his chest lightly, right above his heart. “So, however you do your life is fine. Really.”

“Fine?” Donovan stared at him. “I’ve been ignoring this”—he tapped his chest in the exact spot Beckett had tapped—“since I was fifteen.”

“Yeah, but not anymore, right? So you start from today.”

“How? When I have to stay in this damn closet?”

“Hey.” He lifted his hand and cupped Donovan’s jaw, and the tangle of emotions that were threatening to overwhelm him hushed at the touch. “The first step is always the hardest. Finally accepting who you are, saying it out loud, often takes place in the closet, you’re not on your lonesome there. Don’t underestimate how far you’ve come.”

Donovan wished Beckett’s hand didn’t feel so fucking good cradling him like that. Wished his voice wasn’t so soothing and his words so damn sensible. Wished he didn’t want to shut his eyes and just lean into all that calm rationality. It made him believe everything could be alright, that he could actually step out of the closet with this man and everything would be okay.

But it wouldn’t be.

“And now you get to choose what you want to do.” Beckett waggled his eyebrows suggestively as his hand slid down to rest against a bicep decorated in swirls of dark ink. “What do you want to do, Donovan Bane?” he asked, a smile hovering on lips that had introduced him to a whole new world.

One that was still frustratingly out of reach.

Donovan shook his head as the weight of the unknown threatened to crush him. He backed up a step or two, and Beckett’s hand slid from his arm. He turned and paced into the living area. It was easy for Beckett—he’d been living a full life as a gay man for a lot longer. He knew all the rules. All the do’s and don’ts. The…conventions.

Standing near the couch, he turned and faced the other man. “I don’t know. That’s the thing…I don’t know how it works with two gay men.”

Beckett gave a crooked smile. “Pretty much the same as two straight people.”

“No, I mean…” Fuck. Absently, he started cracking his knuckles. What did he mean?

“Donovan,” Beckett said quietly, his smile gentle. “Is this about the sex stuff?”

“No. Yes.” Donovan stopped cracking his knuckles. “Maybe.” He started to pace from the couch to the bean bag and back again. “I mean…I don’t even know how to do the sex stuff.”

A low chuckle slid from Beckett’s lips. “Oh, trust me, you know how to do the sex stuff.”

Donovan stopped pacing and glanced at Beckett. “What? That thing just now? That’s what it is?”

“See, I don’t know any of this. I’m just a…big…gay…virgin. In every sense of the word. This is my first rodeo.”

“Well, I don’t know, do I?” He started to pace again, cracking his knuckles in time with the falls of his feet. “I mean, is there such a thing? Because, I have had sex before, so I’m technically not a virgin? Does sex with a woman count in—” Christ, he didn’t know…some mental ledger?

Donovan shot Beckett—who was clearly enjoying himself a little too much—an exasperated glare. He just grinned bigger as Donovan paced.

“Do gay men consider other gay men who haven’t had sex with a man a virgin?” he continued.

“Wow, you really do overthink things, don’t you?” 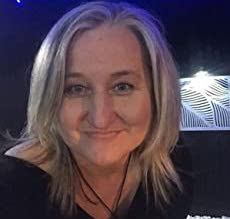 Amy is an award-winning, USA Today best-selling, double RITA nominated, Aussie author who has written seventy plus contemporary romances in both the traditional and digital markets. Her books bring all the feels from sass, quirk and laughter to emotional grit and panty-melting heat.

At sixteen she met a guy she knew she was going to marry and several years later she did. They have two grown kids who have flown the coop for distant shores which enables their travel fetish.

She loves good books and great booze although she'll take mediocre booze if there's nothing else. For many, many years she was a registered nurse which means she knows things. Anatomical things. And she's not afraid to use them!

She's just taken a sea change and gets to create stories whilst overlooking the mighty Pacific Ocean.