Blog Tour, Character Interview, & Giveaway for Survival Can Be Deadly by Charlotte Stuart

1)      Tell us a little bit about yourself--both something we learn from [the story] and something that readers might not guess?
You know that I’m a widow and that I wasn’t in a happy marriage when Dan died suddenly leaving me with two young children and a bossy mother. I managed to finish my PhD in liberal arts and then spent ages looking for a job.  I’m smart, not unattractive, and fairly independent. But deep down I sometimes wonder if my mother is right - maybe I ought to find a husband and give my children a father.
2)      How did you first meet your writer?
It’s been several years. We met in a mall in Seattle and quickly became friends. She didn’t have an agent and was trying to sell our book on her own. It was a relief when she finally got help and we made our debut.
3)      Want to dish about him/her?
She’s short and always wanted to be tall. That’s why I’m 5’10”. I was just lucky not to be 6’ tall; she considered that. Also, she fantasizes about being well dressed. That’s why my boss, P.W., is a fashion plate. Although my writer has to google designer clothes online to figure out how to dress P.W.

4)      Why do you think that your life has ended up being in a book?
So my writer could live vicariously through my adventures. She has a pleasant but relatively sedate life and likes to make up stories about taking risks and dealing with dangerous situations.

5)      Who's your favorite character? Why?
I like Yuri. He’s not only my mentor but a good friend. Since there’s no romantic attachment, he’s also “safe.” And he’s good to my kids. Of course my mother is disappointed that we aren’t a couple, even though she would prefer I end up with someone from a traditional and better paying profession.

6)      Who's your least favorite character? Why?
My mother. She wants me to be something I’m not. I know she allegedly has my best interests at heart, but that doesn’t mean she’s right about what’s best for me…or for the kids. Although she dotes on Mara and Jason and spoils them as only a grandmother can. On the other hand, she forces them – and me –  to eat her ultra healthy food that is far more attractive than it is tasty.

7)      What's next for you?
I understand there’s an assignment that involves identifying who is stealing yard signs during a Congressional campaign. Sounds routine. Can’t imagine that anything exciting will come of it. I mean, who kills someone over yard signs?

About Survival Can Be Deadly 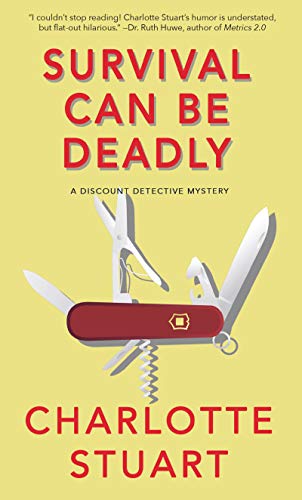 Survival Can Be Deadly: A Discount Detective Mystery

When single mom and recent widow Cameron Chandler takes a much-needed job at Penny-wise Investigations, a detective agency conveniently located in a suburban shopping mall, she grabs the chance to reinvent herself. Her first case is to locate a runaway girl, something her predecessor had been pursuing before he disappeared. Following in his footsteps, the trail leads to a survivalist camp on a remote island in northern Puget Sound. Armed with only a Swiss Army Knife and her quirky on-the-job training as a suburban sleuth, Cameron uncovers more than she bargained for. She soon finds herself in a fight for her own survival in this lighthearted mystery set in Seattle and the San Juan Islands to the north.

In a world filled with uncertainty and too little chocolate, Charlotte Stuart, PhD, has taught college courses in communication, gone commercial fishing in Alaska, and was the VP of HR and Training for a large credit union. Her current passion is for writing lighthearted mysteries with a pinch of adventure and a dollop of humor. When she isn’t writing, she enjoys watching herons, eagles, seals and other sea life from her Vashon Island home office.