Book Blitz & Giveaway for Lace and Lies by Melanie Munton 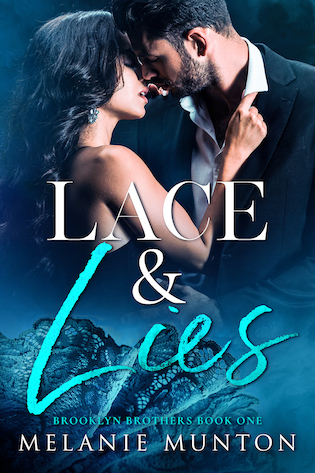 
We are the Rossetti’s.
The exiled “sixth family” of the New York mafia. We’re the good guys.
People don’t fear us…much. They respect us.
The five of us? We’re the Brooklyn Brothers.
And we protect what’s ours.
Jasmine Kingston should run from me. I mean, she should literally pick up her dress, toss away her heels, and haul ass in the complete opposite direction. Because for the last few months that she’s been in New York and taking the fashion world by storm, I’ve been watching her. From my ivory tower, from the shadows. Wherever she’s been, I’ve been only feet away, and she hasn’t even realized it.
Until now.
I can’t stay away and watch one more man take his shot with her. She needs to know what she’s doing to me. Especially since things are heating up with my family’s enemies. I just pray those enemies don’t discover my only weakness.
Maybe it was the wrong way to go. Maybe I should never have touched her. Never treated myself to her addictive taste. But I can’t alleviate this obsession I have with her any more than I can put a bullet between my own eyes.
She’s mine to protect now.
I’ll burn my entire fortune to the ground and take ten of those bullets before I let anything happen to her.
I just hope she doesn’t find out what I’ve done.

Goodreads / Amazon / Barnes & Noble / iBooks / Kobo
—
EXCERPT:
Cris
I took a step toward Jasmine, noting the worry line on her forehead. That would be gone by the end of the night. I’d make damn sure of it.
“I would have killed that man tonight if he’d touched you,” I bit out. “I almost did for even talking to you. For threatening to take you away from me. For pointing a deadly weapon anywhere near you. That would have been illegal because I wouldn’t have been able to claim self-defense in the end. Not with the way I beat him. But I’d still have done it if he’d laid his filthy hands on you. Does that make me a vicious criminal?”
I watched her swallow as I took another step forward. She retreated until her back hit the fireplace. I crowded against her, caging her in by placing my hands on the mantle beside her head.
“And if you’re concerned about me being a violent person, I think you got your answer tonight,” I continued. “But I’m not violent toward innocent people. I reserve violence for those who deserve it. Specifically, those who threaten people I care about.”
I let those words sink in for a moment. She could take that comment however she wanted, though the implication was anything but subtle.
“Is that something you think you can handle?” I whispered against her parted lips. “Because that’s who I am. That’s what you get when you’re involved with me. So, now I have a question for you.”
She licked her lips.
With that one small movement, I was hard as steel.
“What’s that?” she breathed.
I know that voice, sweetheart.
She was ready to get fucked.
I angled my head, acting like I was going in for a kiss. With maybe a millimeter separating our lips, I stopped. Our hot breaths mingled together, no doubt driving her as mad as it was me.
But I had to make a point here.
She had to be sure of her decision before we went any further. I didn’t want her doubting herself at the critical times or thinking I’d coerced her into anything.
“Do you still want me?”
I didn’t have to wait for an answer.
The second the last word left my lips, hers crashed against them.


Traveler. Reader. Beach-goer. St. Louis Cardinals fan. Pasta-obsessed. North Carolina resident. Sarcastic. Bit of a nerd.
Author of the Cruz Brothers, Possession and Politics, and Timid Souls series, Melanie loves all things romance, comedies and suspense in particular because it’s boring to only stick to one sub-genre! From light-hearted comedies to sexy thrillers, she likes to mix it up, but loves her some strong alpha males and sassy heroines.
Go visit Melanie’s website and sign up for her newsletter to stay updated on release dates, teasers, and other details for all of her projects!