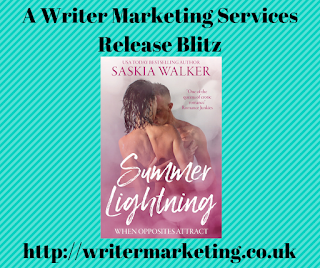 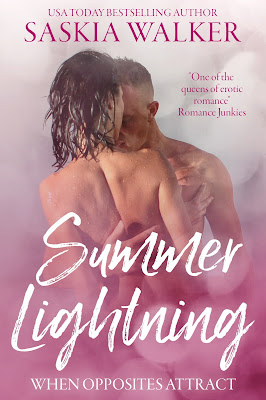 A steamy, heart-warming summer romance…
Molly Delavine thinks she's in heaven spending an idyllic summer getaway on a secluded cove on the English coast, and when she spots a gorgeous Adonis walking naked on the beach, she knows she is. But what is this gorgeous guy doing on her private beach?

Coastal Ranger Julian Keswick is on conservation duty when he finds a woman shacked up in his favorite cove. He’s fuming, and confronts her, but his natural instinct to protect comes to the forefront during an incoming storm.

As the wild summer storm brings these two opposites together, the natural elements take charge of their mutual destinies. But Molly has to return to her business world in London, and her wild holiday romance with a ranger is soon to become a memory. Opposites attract, but for two people so very different, is destiny one week, or forever?

EXCERPT:
Molly hadn’t seen another soul on the beach during the whole time she’d been there. The cottage had been advertised as having a private beach, and –so far—that’s exactly what it had been. Who the hell was he?
Annoyed, she reached for her T-shirt and held it against her boobs, still lying close against the ground. The clumps of beach grass lining the top of the dunes gave her cover, but she wanted her T-shirt to hand in case she needed it.
It really was a man, and he seemed to be alone.
A very attractive man.
He was tall and well built, with closely shorn hair, left longer on top. He wore loud shorts and a threadbare, faded T-shirt. He had the look of a beachcomber, but this was England and the only beachcombers Molly had ever seen were on TV, on Australian soap operas. His legs were corded with strong muscles, and she eyed them as an artist, and more, as a woman—a woman subconsciously hungry for such a sight.
Perhaps she’d been away from people too long. A few trips to the local village for supplies obviously wasn’t enough to keep her in touch with the real world.
Torn between the urge to march over there and ask what the bloody hell he was doing on her beach, and the equally compelling urge to continue secretly observing him, she tried to figure out what to do.
Glued to the spot, the desire to continue observing took the lead.
As the moments passed she noticed again how supremely well built and attractive he was. She smiled to herself, watching as he kicked off his sports shoes and walked barefoot toward the edge of the shore.
As she watched, he walked into the water and dipped a long plastic tube into the surf. He lifted it and looked at it in the light, then sealed it with a plastic cap. She wondered what he was doing. He walked back to where he’d left his shoes and deposited the tube.
She could hardly drag her attention away, but it was her beach, it said so in the advert. Private, secluded beach, the perfect getaway. So what was he doing here? Who did he think he was? She had to remind herself she was from a city and things were different here. Along the wild coast in Northumberland roaming beachcomber types might be the norm. She was enjoying the privacy of the place though, and felt provoked to defend it.
Then he began to strip off.
Molly’s eyebrows lifted, astonished as she was by his actions.
He pulled his T-shirt over his head, giving her a look at his perfectly shaped torso as he did so.
“Wow,” she whispered approvingly.
If she was looking for inspiration, she’d surely found it today. He was a handsome specimen all right, gorgeous looking, and with a very impressive physique. The guy worked out, that much was obvious. He had amazing, powerful shoulders and a six-pack to match. He stood on the edge of the surf as if he owned it—it was as if Neptune himself had just walked out of the waves.
Molly’s eyebrows shot up when she realized he wasn’t stopping at the T-shirt.
He was busy undoing the tie at his waistband and was about to drop his shorts.
She glanced around, half expecting to see somebody else running over to accompany him. But, no, he appeared to be alone. And she was trapped there, clutching her T-shirt to her chest as she observed him, unseen…

After writing shorts for several years Saskia moved into novel-length projects. Fascinated with seduction, Saskia loves to explore how and why we get from saying "hello" to sharing our most intimate selves in moments of extreme passion. Her novels DOUBLE DARE and RAMPANT both won Passionate Plume awards and her writing has twice been nominated for a Romantic Times Magazine Reviewers' Choice Award. She has lots more stories in the pipeline! Saskia lives in the north of England, close to the beautiful Yorkshire moors, with her partner, Mark, and a houseful of felines. Visit her website for more info: www.saskiawalker.com

EARLIER REVIEWS OF SUMMER LIGHTNING
“a highly entertaining and delightfully steamy tale of a lusty holiday romance… opposites can attract and electrically so! 5 Angels and a Recommended Read! Fallen Angel Reviews.

“SUMMER LIGHTNING is an excellent book that takes readers away to their own deserted island. The love scenes are sensual, passionate and readers will find themselves glued to the pages. SUMMER LIGHTNING is the first story that I have read by Saskia Walker, but I can definitely say that I will be on the lookout for more of her work in the future.” 4.5 blue ribbon rating. Angel, Romance Junkies.

“I really recommend this book if you like steamy scenes and romance thrown into the mix. I can’t wait for the next one.” Fresh Fiction.