Blog Tour, Review, & Giveaway for My Nights With You by Adalyn Caine

I am thrilled to be hosting a spot on the MY NIGHTS WITH YOU by Adalyn Caine Blog Tour hosted by Rockstar Book Tours. Check out my post and make sure to enter the giveaway! 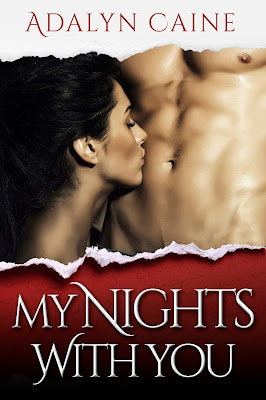 Title: MY NIGHTS WITH YOU

Fresh out of college and on the cusp of a promising career in New York City, Sela Monroe falls hard for Theo Walker when they meet in the park. He’s beautiful. He’s brilliant. He’s a go-getter. He’s everything she’s ever wanted. Sela would do anything for Theo. When he calls, she always answers. When he asks her to come over, she’s there in a matter of minutes. No time is ever too late. No request is ever too inconvenient.

There’s only one problem with Sela’s relationship with Theo: he doesn’t love her back. Though Sela’s best friend, Annie, has been pleading with her to move on from Theo for months, citing his manipulative behavior and the hold he seems to have over sensitive Sela, when it finally hits Sela that her feelings aren’t reciprocated, it’s too much.

After an emotional breakdown that leaves Sela in the hospital, she struggles to cope with her emotions. She has never felt more lost or hopeless or used. Only when she begins the healing process does she realize that genuine love does exist and that sometimes in places where you least expect it.

REVIEW
*I received a free copy of this book which I voluntarily chose to write an honest review for.
This was quite the surprising read I must say. We follow Sela who deals with a very bad case of depression. This is not helped in the slightest by the very toxic relationship she has been in for years. A large portion of the story plays this relationship out for us. It is one of those past/present books that takes you back and forth. I must say that I really really really wanted to punch Theo or just have something really bad happen to him. He is an uber douche in my opinion. Her sends her on a huge downward spiral that leads her to eventually meeting the man she should really be with though I must say that I felt like this part of the story did not get enough time after focusing most of the story on the bad relationship as well as the depression (which is discussed in a very realistic yet respectful manner). Made for a very interesting read. I really liked it so I give it 4/5 stars.

Writer. Thinker. Procrastinator. Getting ready to release my novel, My Nights With You. Working on some other projects while trying to stay sane.