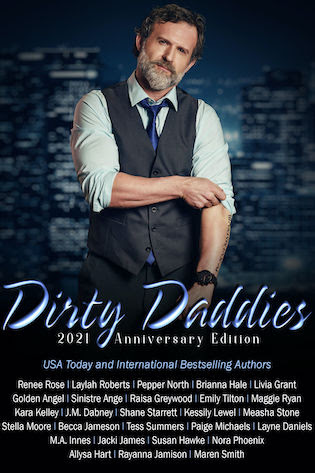 A DADDY FOR EVERYONE…

Available for a limited time, this collection of twenty-five sexy-as-sin romances star Daddy Doms who demand obedience and require your total surrender.

Whether you like Cowboy Daddies, Dark Daddies, Doctor Daddies, Stern Daddies, Shifter Daddies, Alien Daddies, or LGTBQ Daddies, there is a Daddy waiting for you. This deliciously naughty collection of all-new stories, penned by some of the best authors in the genre, is bursting with HOT, raw Daddy Dom action that’s sure to leave you breathless.

In the seedy, underground club, I take a mouthful of whisky to mask my pounding fury. All around me sit shadowy figures with baseball caps pulled low over their faces or bandanas around their mouths and noses, while young and drugged up women are paraded in front of us, some with vacant expressions, some with barely concealed terror. The first round are the girls and women who aren’t virgins, and they’re all dressed like colorful, flashy strippers with most of their flesh on display. My heart is in my mouth as each woman is dragged on stage with a chain around her neck. The bidding is humiliating for the women. Some go for as little as a thousand dollars. A thousand for a human life. It’s disgusting.

After an hour, the unseen woman running the auction announces over the speakers that the first round is over and the virgins will be next, and I sit upright in shock. Scarlet hasn’t appeared. They’ve killed her. I’ll burn this place down. I’ll murder every last person in this club with my bare—

Before I can leap out of my seat, Scarlet is dragged on stage by a chain around her neck.

My whole world turns crimson with bloodlust at the sight of her terrified face.

The man holding the chain.

The invisible woman calling my girl, “Lot one-one-seven” instead of her name.

The buyers all around me devouring Scarlet with greedy eyes.

I’ll kill them all.

Focus. I’ll get Scarlet safely away from here, and later I can take as much revenge as I want.

I listen to the bids going up and up. Twenty thousand. Twenty-five thousand. The bids dwindle until there’s just one man left. He’s wearing a cheap shirt and a twisted, triumphant sneer on his lips, and he’s staring at Scarlet like she’s a butterfly and he’s craving to pull her wings off.

“One hundred thousand dollars,” I call out.

Purple shirt man glares at me. He opens his mouth like he wants to make another bid, and then takes an angry swig of his drink.

The room is silent.

I stand up and stride to the back of the room where the bursar is waiting at a laptop and complete the Bitcoin transaction. No cash and credit cards here, only cryptocurrency that can’t be traced.

Then I’m led into a side room and told to wait for my goods.

A few minutes later, a door opens and Scarlet is thrust inside. She stumbles, and as she looks up at me with haunted eyes, she bursts into tears. I draw her into my arms and cradle her against my chest, murmuring soft words as she heaves against me. Her whole body is shaking in fear. “It’s all right. Daddy’s got you.”

“How did you find me here? Did Zac tell you? Mr. Ventura, I’m so sorry. I don’t understand how this happened.”

I take her tearstained face in my hands and kiss her tears from her cheeks. She’s warm and alive, and she’s mine. All mine. “I’m just relieved I got you back.”

My smile is devilish. Home, to those assholes who didn’t even know she was gone? I don’t fucking think so. “I can’t do that, babygirl. I paid a lot of money for you and now you’re in my debt. How are you going to pay me back?”

She swallows and her face falls. “Of course I’ll pay you back, every cent. I’m a hard worker.”

I shake my head. “On minimum wage with a skating career to support? I’d like to see return on my investment before I die.”

“Either you’re mine for the next month…or I put you right back in that room and those men can fight over you. Your choice. Oh, and one more thing.” My smile widens. “Don’t call me Mr. Ventura. Call me Daddy.”

Scarlet is staring at me like she doesn’t recognize me. This is me, rosebud. I’m done playing nice.

It’s a question, not an address, but that sweet word twines through me and short-circuits the last of my patience. I take her hand and tug her toward the door. She can get used to her new reality later. I need to get her in my house, now.

Her Ever After Daddies by Measha Stone

Cory’s face burned with embarrassment. She worked hard to hide certain aspects of herself from the outside world. Especially, those she worked with and customers at the club. But somehow, Kaleb and Jason saw right through her. But if they really were daddies, did she really have any chance of not being caught by them?

“Okay.” She took a deep breath and stood up from the couch. “So, you want to keep the contract between us?” she asked, trying to take a matter-of-fact tone. Better to see this as a business transaction. They’d get their fun, and she’d probably have some too along the way, then in the end, she’d have the money she needed.

“Kaleb, I didn’t mean to lie to you guys. You were customers, and it wouldn’t have been appropriate for me to tell you that I needed some extra cash.” There, use logic, that should put out the fire burning in his eyes.

“What did I tell you that night when you insisted nothing was wrong and you weren’t lying to us?” Kaleb asked, his dark eyes narrowing. He was intimidating enough with his dress shirt hugging his muscular form so tightly, and all his tattoos running down his arms, but now that she had a sense of what he was going to do with her, her nerves worked overtime.

“You said if you found out I was lying, I’d pay.” She blinked. It had been such an off the cuff comment, she’d disregarded it.

“So, then you understand what that means now, right?” Kaleb asked.

“You don’t really think to punish me for that?” She laughed. “I wasn’t under contract with you then.”

Cory stood, frozen in place, as Kaleb moved behind her searching for the zipper. With gentle care, he ran the zipper down the track. His large, rough hands, moved along her bare back to push the dress down over her shoulders.

“No bra?” Jason smiled at her as her breasts were exposed. A tingle danced down her spine. She’d been naked in front of men before, but none of them had such a hungry stare as Jason did.

Kaleb pushed the dress over her hips. “No panties either.” He sounded appreciative.

“Little girls shouldn’t go out without panties, Cory,” Jason chastised, but his pupils were too damn large for her to take him seriously. The hard bulge in his pants spoke to his enjoyment as well.

“Have you ever been spanked before?” Kaleb asked, squatting in front of her. He took her hands and placed them on his broad shoulders so she could balance while he plucked off her heels.

“Yes,” she answered. This was her job now. A full week of being their little girl, and she’d have everything she needed. There were worse ways to make money than spending it with two of the hottest men in the city.

“When?” Jason asked as he rolled up his sleeves, revealing his own dark tats. She’d never noticed them before because he always wore a suit.

“He was your daddy?” Jason finished for her again.

“Good.” Kaleb stood up again, brushing his fingertips along her jaw. “Daddy Jason is going to punish you now, Cory. You are never ever to lie to us again. Not even little lies. Not even omissions. We can’t help you if you don’t tell us. Do you understand me?” He cupped her face in his large hand, and hell, it felt good.

“I was only trying to be professional.” She tried once more to make him understand.

“Now, you can do your best to be a good girl and take your spanking.”