Blame it on my writer

Mahalo for stopping by today and visiting with me. For those of you who’ve never been to Hawaii, mahalo is island talk for thank you. You’re probably wondering how an old codger like me keeps getting involved in solving murders. Well, as the saying goes, it all started because of a woman.

Those of you who are of the fairer sex are probably not happy with me right now because I’ve broken at least two appropriate-language rules. But, you know what? Tough cookies. (Does that one count, too?) Anyway, if you happen to be a kickboxing champ or a martial arts expert, please don’t take out your frustrations on me. Blame it on my writer. He’s put me through so much in my crime-fighting career that I think he deserves a little pain, too.

My writer and I talked this out a long time ago and came to an understanding. I had a perfectly good job in LA chasing down deadbeats. I was happy being miserable in my life. But the next thing I knew, my life was in the crapper. (And no, that one doesn’t count because it’s the real name of the first toilet.) Anyway, I told my writer that if he wanted me to move to Hawaii and be miserable (again) for a few years so he could write a mystery, I’d do it on one condition. He had to let me solve the crimes, and he was the one in charge of problems and complaints.

The way I look at it, the situation is kind of like the old party game where everyone whispers a secret to the next person in the room. By the time the last person tells the secret, it’s completely different from what the first person heard. What that means is the only thing my writer can do is mess up my story. So if you have a complaint or there’s something wrong—point the finger at him.

It might sound like I’m passing the buck here, but I’m just telling it like it is. Believe me, before I took this gig I talked to some of my fellow characters. They all said the same thing. Writers have been taking credit for what we do since the beginning of time. That’s why I insisted on having a prewriting agreement—think of it as a prenup for writers and their characters. Anyway, things have been working out pretty good. Old whatsisname is holding up his end of the deal. He threw me a curve with Mystery of the Eight Islands, though. In this one I have to find a valuable missing necklace and a killer. Two crimes for the price of one. If he keeps this up, I might have to renegotiate.

About Mystery of the Eight Islands 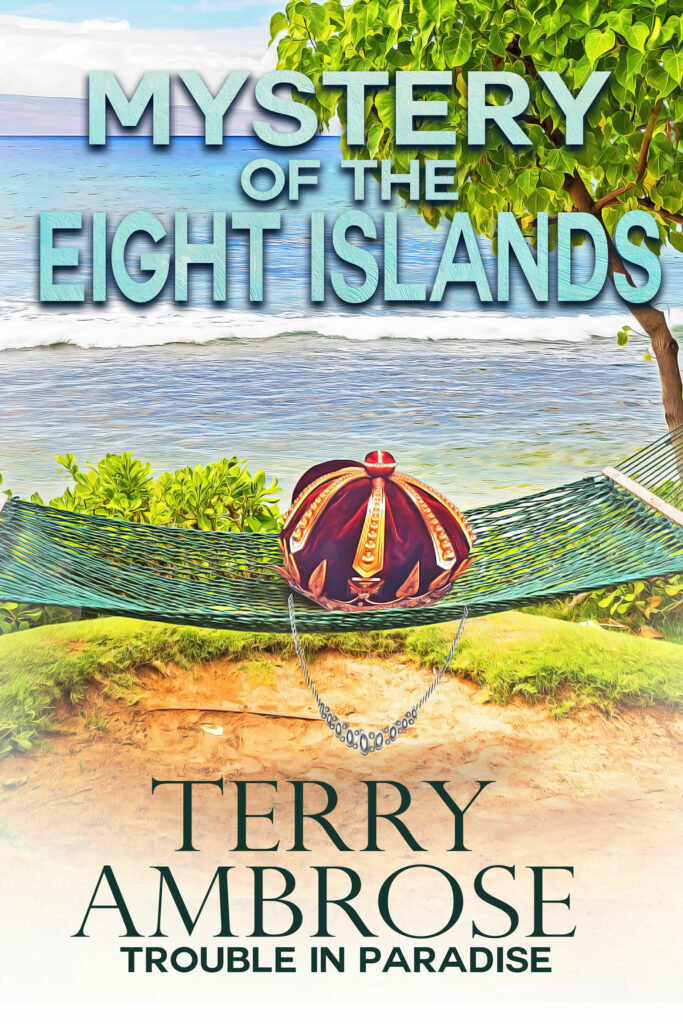 Mystery of the Eight Islands (Trouble in Paradise)

If you love senior sleuths in cozy mysteries, you’re going to love McKenna and his pal Chance Logan

Apartment manager and amateur sleuth McKenna wants a break from solving murders. Too bad his best friend, wannabe PI Chance Logan, doesn’t feel the same. Chance has found a case he thinks McKenna’s going to love—the death of prominent attorney Julian Carr, and the theft of a 125-year-old necklace that’s worth a quarter of a million dollars. Before long, McKenna’s feeling pressured from all sides—find the necklace, solve the murder. Sure. Why not just add save the world?

McKenna’s sure something fishy is going on when he and Chance meet with Julian’s granddaughter about the case. She’s created her own murder board with five suspects. The list includes an unstable, art-collecting veterinarian, a convicted felon, a disbarred attorney, a suspected art thief, and Julian’s new business partner

As the investigation ramps up, McKenna and Chance see their leads drying out faster than laundry in the tropical sun. The really bad news is they’re not sure they can even find the Eight Islands or solve the murder. For once, McKenna’s worried they just might fail.

Why you might love this book Tired of the same old cozy mystery fare? Then cozy up with male amateur detective McKenna and his PI wannabe pal Chance Logan in this Hawaii murder mystery. When it comes to senior sleuths in cozy mysteries, McKenna’s as sharp as they come, but with a fun dose of snarky attitude thrown in. Enjoy the ambience of Hawaii while you’re savoring a little murder in paradise.

REVIEW
*I received a free copy of this book which I voluntarily chose to write an honest review for.
McKenna is burnt out when it comes to investigating but Chance is ready to dive back in so he brings Isabel by for a consultation. McKenna tries to not get involved but when the story takes a weird turn he can tell she is hiding something. That something could just be the most important part as it holds both history as well as a high monetary value. This leads to all sorts of surprising clues along with some interesting interactions. This makes for a captivating read as you try to figure it all out before the end. Perfect for fans of cozies featuring a P.I.. I really liked it so I give it 4/5 stars.

Once upon a time, in a life he’d rather forget, Terry Ambrose tracked down deadbeats for a living. He also hired big guys with tow trucks to steal cars—but only when negotiations failed. Those years of chasing deadbeats taught him many valuable life lessons such as—always keep your car in the garage.