Blog Tour & Review for Murder in the Badlands by Rita Moreau

Murder in the Badlands -

About Murder in the Badlands 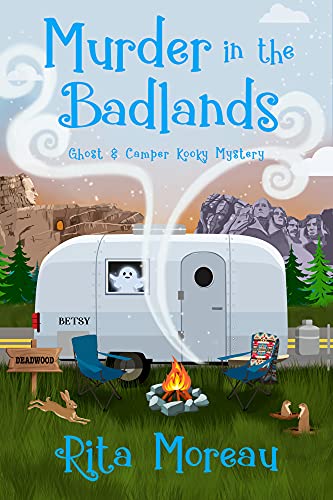 Murder in the Badlands - Ghost & the Camper Kooky Mystery

More antics as Mabel Gold and her friend — spirit — ghost - whatever you want to call Irma, gets Mabel into yet another mystery. Things can go bad quickly in the Badlands...

Everything about Mabel’s golden years has been a surprise. The divorce, Irma the ghost haunting her vintage camper, dead guys whose murders Mabel must help Irma solve every stop of the way.

Mabel and her ghostly roommate Irma, along with friend Lili and her retired homicide detective husband Bob, have made it to the Badlands. From the get-go, they were smack dab in the middle of another murder.

Ralph, an old Marine buddy asks Bob, to investigate the death of his son Danny. His death has been ruled an accident. Ralph didn’t agree. He’s sure his son was pushed off top of Mount Rushmore. Right near the Hall of Records, or as it’s called in the movies and YouTube, the Secret Chamber. But why?

Did Danny, a skilled rock climber and much sought-after guide, find long-lost gold?

Were Danny’s last words–those of Crazy Horse–Hokahey–it’s a good day to die–leave a clue as to his demise?

Will Irma run out of costumes from her ghostly cyberspace closet before they solve the murder?

And what about Cindy Lou and her side-kick Top Gun Colonel Clark–did they have a secret that Danny uncovered that fatal night outside the Secret Chamber?

Can Mabel and Irma catch the killer before Mabel joins Irma crashing through the Pearly Gates?

Murder in the Badlands is the high spirited third book in the hilarious Ghost & the Camper Kooky Mystery series. If you like golden girl sleuths, zany characters, and sardonic humor, then you’ll love this kooky mystery. Hoping you like camping!

REVIEW
*I received a free copy of this book which I voluntarily wrote an honest review for.
Welcome to another fun adventure with Mabel and her friendly ghost Irma. I love seeing what new location this due ends up at each time. It is the Badlands this time but they get thrown into a murder investigation from the start when a friend of Bob's asked them to look into his sons death. This leads to quite the fun time as they move about the new area while learning all types of new things. It makes me feel like I am along for their adventures making for a great time. A fabulously fun series full of quirky witty characters, new locations every time, and plenty of humor mixed in with their adventures. A must read. I totally loved it so I give it 5/5 stars.

A workaholic by nature, upon retirement, Rita Moreau began work on her bucket list, writing a book. Traveling the national parks with her husband George in a vintage Bluebird motor home, (on George’s list), Rita completed her first novel Bribing Saint Anthony. Back home she completed Nuns! Psychics! & Gypsies! OH! NO, Feisty Nuns and The Russian & Aunt Sophia and The House on Xenia. Last year when we entered the Twilight Zone Rita wrote the first two new novels in the Ghost & the Camper series. Rita and her husband live in a postcard called Florida where he has fun telling everyone he is the author’s husband. When not writing she joins PatZi Gil on the Joy on Paper radio program with Book Buzz Mysteries, or you can find her teaching SilverSneakers fitness classes and doing her best to keep busy. She loves connecting with readers. Visit her at www.RitaMoreau.com or find her on Facebook at facebook.com/RitaMoreauAuthor. She would love to hear from you.