Book Blitz & Giveaway for Eye of the Colossus by Nicole Grotepas Some think the City of Jade Spires is a utopia. It very much isn’t.

Holly Drake is in prison for defending herself from a murderer. That’s the kind of corruption thriving in the city—where evidence is destroyed and the innocent go to jail.

But everything’s about to change.

Someone exonerates Holly and she walks free. She has no idea who. Or why. But they have a job for her. Steal back the Eye of the Colossus, a priceless jewel. It’s about to be moved off-planet, and when that happens, the trail will go cold.

Out of prison with no other work on the horizon, the job is a gift. If only she knew how to pull off a heist.

The clock is ticking. If she can assemble a team and pretend like she knows how to do this, maybe she can fake it long enough to do a job better suited to a master-thief. Why Holly? Who’s pulling her strings? And just how far across the moon system will she have to go to finish the job?

This is Holly Drake. Someone tried to kill her once. She survived. This time, she’ll conquer…or die trying.

Goodreads / Amazon
—
EXCERPT:
“So, Xadrian. What is it that you need?” Holly waited for something about blackmail or a request for her to tail and photograph some wealthy man in a seat of power who was potentially cheating.
“Ah, to business then,” he muttered and stretched his back and neck, and then cracked his knuckles. “Very well. This face you see before you? It isn’t the face of the one who requires your services. I’m here on behalf of someone else. Someone with money and power.”
Holly attempted to keep her face passive. “Obviously,” she said. Obviously. Obviously I wouldn’t be introduced to the actual client. Duh. It was probably like this a lot, in this business. Whatever this business was.
“Yes, I’m sure you knew that,” Xadrian said, a grin touching the corners of his lips. “My employer has had a valuable, priceless possession stolen:
the Eye of the Colossus. And my employer needs it back.”
“Oh great,” Holly said. “It’s not a simple job.”
“It was stolen, my employer needs it back. Ms. HD, what do you know about the Eye of the Colossus?”
She shrugged. “Nothing, really. I don’t move in those circles. It’s not really my thing.”
“The Eye is a golden amulet with eleven priceless gems embedded within it—it was created by the famous Druiviin artisan, Ko Lapsong to represent the unity of the four races on the six moons, bestowed by the life-giving hydrantium found on Muibaus—aka the Eye,” he paused. “Sorry. You’ve really never heard of this?”
Holly shook her head. “I don’t dig jewelry. But I get it, Ixion is the Eye. So one gem for each race, each inhabited moon, and then the biggest is Ixion?”
“Muibaus,” he nodded. “Ixion is the pedestrian term for the planet.”
That fit. The rings, the attention to appearance, the expensive wines. Xadrian was kind of a snob.
“Moving on. Eleven gems. The biggest is the Eye, exactly. The problem for us and therefore you, is that in less than two weeks it will be moved.” Xadrian studied Holly’s face as though to see if his words were having the right impact. She nodded once to give him feedback. “Once it’s moved, we won’t know where it is and will be unable to recover it.”
“An item, stolen, you need it back before it gets moved and you can’t track it. Great.”
“It’s slightly more complicated than that, however, some of the details that you will need, we’ve got.” He tapped a dark green folder sitting on the table beside his goblet of wine. He paused and swirled the drink around in the glass. He sniffed it and then took a sip. “This folder contains an image of the jewels and the location. We can provide some other tiny bits of intel. For the rest, you will need to scout it out, sneak in, and try to get it back without it being damaged in any way. Or, without your being arrested.”
Holly pursed her lips. “Makes total sense. But before you go on, we should address the elephant in the room. Payment. So far I’m not feeling inclined to do such a dangerous-sounding job.”
Xadrian dipped his head in satisfaction. “You’ll be paid, rather handsomely if I do say so myself. 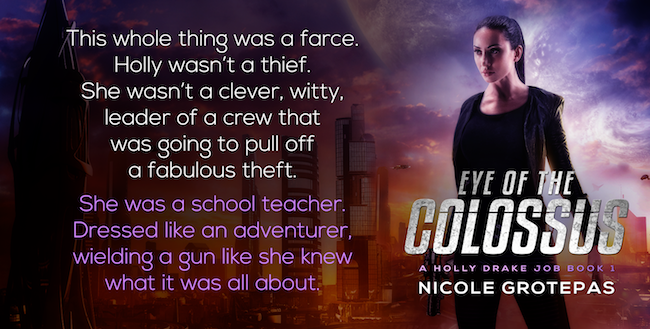 Author Bio:
I'm passionate about human rights, animal rights, and living life with no regrets. I love how becoming a parent has deepened my devotion to making the world a better place. I do that best by crafting stories that attempt to answer hard questions--the ones I think about most--while also being entertaining and fun. I live in a landscape that reminds me of my place in the universe, under an endless sky and towering mountains that are older than human memory, and I love it here.