Book Blitz & Giveaway for The Promotion by Mika Lane 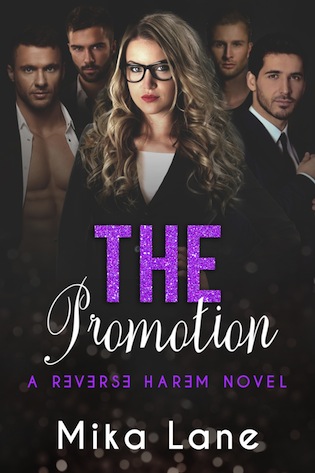 
You know that saying “I get by with a little help from my friends?”
Well, that’s not me.
I don’t take help. Not from anyone. At least I didn’t, until I was backed into a corner. With no choice.
And when help came my way in the form of several handsome guys, I wasn’t sure if my situation had gone from bad to worse.
Or if it was just what I needed—and what I’d actually needed all along.

Add to Goodreads / Pre-order
—
EXCERPT:
Two pair of lips met either side of my neck, but I squirmed away from their temptation just as a hand slithered over my silk-covered ass and pinched me.
But my anxiety slipped out the door the moment I saw him. He entered the coffee shop, a tall drink of water with an expensive, perfectly fitting suit. He turned heads as he moved like a strong, graceful athlete. What a catch he was. Why had it taken me so long to realize that?
I came to, tucked under a down comforter. For a quick moment I wasn’t sure where I was, but the moonlight coming in the bedroom windows told me I wasn’t at home. I looked around, my heart startled into a panicky rush.
And while I was hyperaware that I was about to fuck Brade, it was really as though I were making love to each guy in the room.
And, there was Von, who so expertly tormented me with his decadent attentions. I pushed my hips back toward him to give more of myself, and he growled his appreciation. His thumbs opened me and next thing I knew, his tongue was buried to the hilt. If my mouth hadn’t been full of Cato’s cock, I would have screamed loudly enough for the neighbors and the people in the building next door to hear, too.
Two hands came from behind to grasp my breasts, and those in front of me pulled me closer by grabbing the cheeks of my ass. I was sandwiched nice and tight between two hot as hell men. While the mouth of one bruised my lips, those of the other ravaged my neck. I figured I’d be covered with marks the next day, but that’s what cover-up was for, right?
Now behind me, he began massaging the most amazing-smelling shampoo into my hair. He lathered it up on my scalp like a pro, and somehow knew to let just a little of it dribble down to the long ends. Maybe he’d washed some other woman’s hair in his past? I didn’t know, and I certainly didn’t care.
“I’ve wanted to touch you since the first day I met you. Actually, I wanted to do more than that. A lot more,” he whispered.
He walked up behind me, his hands falling on my shoulders. He pushed aside my hair, his lips traveling down my neck. His touch was soft but strong at the same time, leaving a trail of fire on my skin and a throbbing between my legs. I had to feel his lips again on mine, and spun around to face him.
I leaned toward him and he tilted back for a split second, not something a girl wants to see when she’s trying to be gutsy. While I tried to figure out what to do, he must have screwed up his own courage, because the next moment I was enjoying his mouth on my lips.
At first, his kiss was soft, but the second I invited him in with my parted lips, he pressed against mine with a passion that took my breath away. Like he was dying of thirst and I was his glass of water.
“They have no idea we’re standing right here. They have no idea how turned on you are. And they have no idea I’m about to unzip the back of your dress.”
“If you really want to move up in the firm…”
She waited for me to respond, so I nodded furiously.
“You need to have a husband.”


Writing has been a passion of Mika’s since a young age (her first book was "The Day I Ate the Milkyway"), but erotic romance is now what gives purpose to her days and nights. She lives in magical Northern California with her own handsome alpha dude, sometimes known as Mr. Mika Lane, and an evil cat named Bill. A devotee of the intelligent and beautiful, and lover of shiny things, she’s a yogi, hiker, traveler, thinker, observer, and book worm. She has been known to drink cheap champagne and has way too many shoes.
A National Reader's Choice Awards finalist, Mika always deliver a hot, sexy romp, often with imperfect characters, and a promised happily ever after (or at least happy for now).
She LOVES to hear from readers, and can be found at www.mikalane.com, and facebook.com/mikalaneauthor, when she's not dreaming up naughty tales to share.