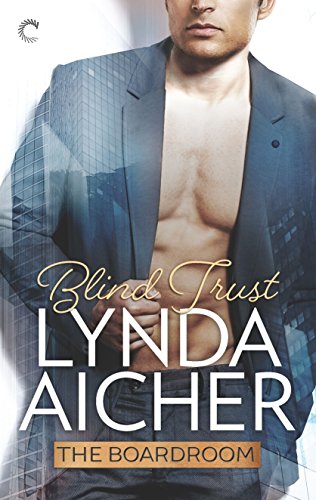 Blind Trust
Lynda Aicher
(The Boardroom)
Publication date: eBook is out May 14th, the paperback May 29th!
Genres: Erotica, Romance


A blindfold. Four men intent on only her pleasure. Knowing she’s being watched. It’s her ultimate erotic fantasy—and it’s really happening.
Brighton Wakeford has played by the rules her entire life. From her country-club upbringing to her job as a paralegal, she’s the image of propriety and class. And she’s tired of it.
An invitation to the Boardroom is Brighton’s chance to transform. Here she’s Brie—free to explore her wildest cravings, her most scandalous desires.
As the lawyer for the exclusive Boardroom club, Ryan Burns knows confidentiality is vital. As a member, he gets off on the controlled ecstasy, the exhilarating balance of trust and power. So when he recognizes a beautiful, blindfolded and very willing new participant as a coworker, he knows he should back off. Brighton Wakeford is business. The Boardroom is about pleasure.
But the rules are about to change.

Goodreads / Amazon / Barnes & Noble / iBooks / Kobo
—
EXCERPT:
Jacob popped his head in the doorway. “I’m getting her now.” He glanced around. “Any questions?”
Three silent head shakes were his answer.
“Good.” He turned away before he quickly spun back. “It’s her birthday present. Let’s make it good for her.” He winked, a devious smile appearing before he left.
Ryan crossed his arms, inhaled. He closed his eyes and focused inward. The slow beat of his pulse came through to provide the consistency he sought. Another inhale and he released the residual irritation that lingered.
The low hum of the air conditioner filtered into his awareness. In some ways, it amplified the silence, but he found solace in it. Gone was the stress of the day. Dismissed were the troubles that waited for him at his desk. Nothing mattered but this moment.
Which was all he had to give.
A soft gasp from the hallway yanked his eyes open. Everything froze as he waited for the woman to step through the door. Anticipation buzzed on a low note to tighten his chest and entice his dick. Four on one was always an interesting tango between observing and participating.
He’d be content to watch tonight, if the scene played out that way, let the erotic show be a teaser until he got home and relieved the tension with his own hand. Controlling the build was just another part of the game.
Jacob appeared first, his focus on the leggy brunette slightly behind him. He ushered her through the doorway, a hand on her back to guide her. A black blindfold covered her eyes and most of her upper face, which only highlighted the dark red stain of her lipstick.
This was ultimate trust given by her—to a group of men she didn’t know.
The power of that surged up to pick at the multitude of possibilities. She was at their mercy. Theirs to tempt and pleasure until she begged for relief…or more.
Wavy curls draped over her shoulders, the ends grazing the mounds of her breasts pushed high by the lilac bra. Her lean form curved at the hips and enticed his gaze down to the tiny silk panties, which shimmered softly in the low light.
He swallowed, pulse increasing when a tentative smile teased her lips. He sucked in a quiet breath, thoughts spinning.
There was something familiar about her. Too familiar.
Brie. That was the name Jacob had provided, and it was probably a scene name.
His eyes narrowed, doubts forming as logic kicked in. The odds were astronomical given the number of people populating the San Francisco Bay area.
Brie.
Like the cheese he detested but consumed when social situations dictated he should. Like the possible shortened name of the paralegal who worked with his law partner. Same brown hair. Same general height and build. Same nervous tap of her fingers in a run against her thumb that she failed to contain when presenting her case research.
Brighton Wakeford. Damn it.
Even if it was her, did it matter? She couldn’t see him.
But he could see all of her. Every small dip and freckle that dotted her pale skin. Like the mole at the edge of her collarbone. And the one on her hip, just above her panty line.
Were there more? Would he find them all?
One night of lust and sex. That was all he was there for.
And so was she.