Cover Reveal for The Proposition by A.M. Salinger 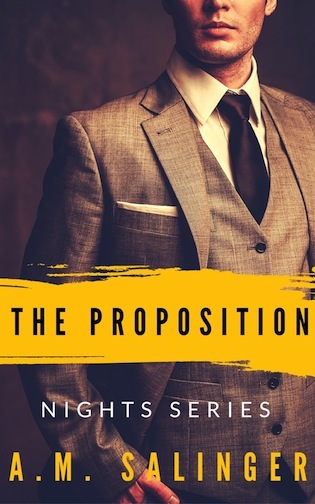 
They call me the Charmer. My best friend Wade tells me it’s because I’m suave and mysterious. But he doesn’t know my secret. The one I’ve kept hidden from him for twelve years. The one I will never reveal to him — Rhys
They call me The Brute. Probably because of my physique. And, let’s face it, because I’m a total dick at times. So Rhys likes to tell me anyway. Thing is, there’s something Rhys isn’t telling me. Something I’m dying to hear from his lips. His sinful confession. You see, I know Rhys’s secret — Wade
Rhys Damon has spent most of his adult life watching Wade Tucker bed woman after woman, his dark desire for his best friend and business partner a secret he is determined to take to his grave, since he knows it will never be reciprocated. With their design firm thriving across two continents, Rhys finds himself content burying his heartache in a string of meaningless, casual sex arrangements. Until the night everything changes.
When Wade Tucker stumbles upon his best friend calling out his name as he pleasures himself, he knows his relationship with Rhys will never be the same again. A year later, the memory of what Wade saw is still branded in his mind and his feelings for Rhys have evolved into something he never anticipated. As tension mounts and the relationship between the two business partners becomes increasingly strained, things finally come to a head the night Wade follows Rhys and discovers him with another man.
After an explosive confrontation, Wade makes Rhys a proposition he can’t refuse: that they try things out for six weeks. Six weeks of exploring a side of each other they never knew before. Six weeks of torrid kisses and sultry touches. Six weeks of screamingly good, scorching hot sex. Six weeks of utterly losing themselves to one another.
But as the end of their proposition looms in sight, can Wade persuade Rhys that he wants more? Or will Rhys’s deep-seated fears stop him from fully surrendering his heart and soul to the one man he thought he could never have?
Discover Rhys and Wade’s wickedly intoxicating story in this sixth novella in the hot, contemporary romance series Nights by A.M. Salinger. Note from the author: although each book in Nights can be read as a standalone, you will enjoy this series even more if you read the books in order!
This is a novella length MM romance with a HEA.

Ava Marie Salinger is the pen name of an Amazon bestselling author who has always wanted to write scorching hot contemporary and erotic romance. In 2018, she finally decided to venture to the steamy side. NIGHTS is the first of several sizzling series featuring sweet, sexy men and women with dark pasts and a whole lot of love to give to the ones brave enough to fight for their hearts. When she’s not dreaming up hotties to write about, you’ll find Ava creating kickass music playlists to write to, spying on the wildlife in her garden, drooling over gadgets, and eating Chinese.
Want to be the first to know about Ava’s new releases and get access to exclusive content, sneak previews, sales, and giveaways ? Then sign up to her Reader Group here and join her VIP Facebook Fan Group here.
Website / Goodreads / Facebook / Bookbub / Pinterest / Instagram