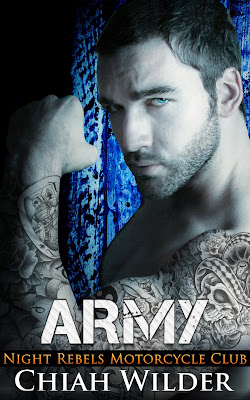 A member of the Night Rebels MC, Army is an arrogant, tough, SOB, and he makes no bones about it. His idea of having a good time is riding his Harley, boozing with his brothers, and having rowdy sex whenever the mood strikes him—which is often. Hook ups are on his terms, and if a woman doesn’t like it, there’s always another one waiting to take her place.
Then he sees her fighting in the rink, moving in ways that give him a whole bunch of nasty ideas about what he wants to do to her. And the way she looks at him? Well … there’s no denying the intense, mutual attraction. Chemistry sparks between them like the Fourth of July.
The only problem? She says she’s not interested. What the …?
Stiletto’s attraction to the rugged biker is like a storm electrifying the air, but with his swagger and perpetual smirk, he’s a poster boy for shattering hearts. If only her body would understand that.
Then she finds out he’s a member of the Night Rebels Motorcycle Club and is a deadly rival of her brother’s MC—The Satan’s Pistons.
But one night with him wouldn’t hurt anyone.
It’d just be a hook up, and probably the best sex she’d ever had.
Besides, who would ever know?
Then a series of tragic events lead the star-crossed lovers down a dangerous and dark path, forcing Stiletto and Army to make the hardest choices of their lives.
The Night Rebels MC series are standalone romance novels. This is Army’s story. This book contains violence, abuse, strong language, and steamy/graphic sexual scenes. It describes the life and actions of an outlaw motorcycle club. HEA. No cliffhangers. The book is intended for readers over the age of 18.

Great MC romance with a nice twist that I enjoyed. Army sees her for the first time as she is fighting is the ring kicking butt I must say which is awesome for a change. She blows him off for quite some time which had me giggling until hormones make her cave at least part way. They hold off on physical things for longer then most in this genre can ever claim which was a nice change. Captures the dangerous MC world perfectly with strong characters to follow. if you like the genre you will like the book. I really liked it so I give it 4/5 stars.

Aren’t you cold?”
Mia jumped at the sound of the deep voice—she didn’t hear anyone come out. She pushed away from the wall and let her gaze fall on Army. The yellow glow of the streetlights made his features soft against the darkness of the night. She ran her hands up and down her pebbled skin. “I am. I was just going to head back inside.”
He stood in front of her, blocking her. “Stay for a few minutes.” He shrugged off his leather jacket and draped it around her shoulders before she could protest. The heat from his body felt absurdly intimate, and she was extremely aware of his fingers brushing the back of her neck. He smelled of leather and caramelized dark coffee beans with a tang of salty herbs to it, and it was the most sensual aroma she’d ever come across. It wrapped around her, and much to her chagrin, desire rippled through her.
“Thanks,” she croaked, her throat dry with tension.
“We never really met each other. I’m Army.”
“Mia,” she said softly. He still stood close behind her.
“That’s a pretty name,” his breath whispered over the curve of her neck, threatening to ensnare her.
Without thinking, she leaned back into him, and he ran a thumb along her jaw as his calloused skin scratched her lightly. “I couldn’t keep my eyes off of you during the fight. You were amazing.” His breath was warm on her cheek and her inner thighs clenched in reaction.
Army cupped Mia’s chin and tilted her head back so she gazed into his desire-filled eyes. Her lips parted when he dipped his head down as his grip tightened on her chin.
Her brain screamed at her to stop, but her traitorous body relaxed in his powerful arms. Danger radiated from him, but it only heightened her excitement.
“Mia,” he said, his low voice a mixture of sensual and gruff masculinity.
Her stomach fluttered as she closed her eyes in anticipation of his kiss. 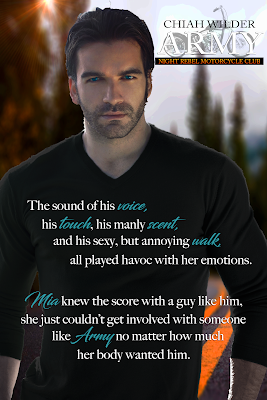 Chiah Wilder is the author of the successful Insurgents MC series.
Chiah's love of bad boys has inspired her Insurgents series. She loves an alpha male whose softer side is brought out by a passionate, spirited woman. Steamy, biker romances with rough, sexy bad boys are her guilty pleasure along with brownies, cheddar cheese, and movie marathons. She is busy writing her next book in the series. Chiah would love to hear from you. You can contact her at: chiahwilder@gmail.com Visit her on facebook: https://www.facebook.com/AuthorChiahWilder/ Join the Chiah Wilder Newsletter to get the scoop on new releases, previews, free short stories, and a whole lot of other exciting goodies: http://eepurl.com/bACCL1 Happy Reading!