Sale Blitz for Tease Me by Kally Ash 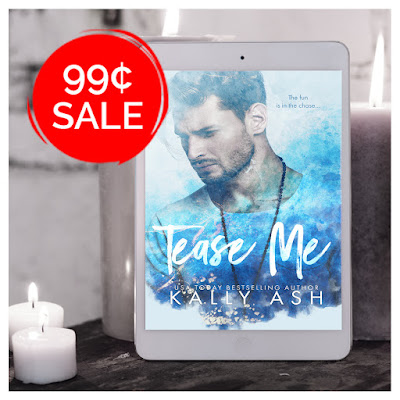 Grab Tease Me by @Kally.Ash - book 2 in the Temptation series for only 99c!

This steamy second chance contemporary romance can be read as a standalone.

Her eyes snapped to his face, suddenly unable to deny him, unable to deny his dominant side. He thrust into her, more deeply than before, and she whimpered. "Tell me this can't be it for us."

She wanted to challenge him, but she couldn't. She wanted this. She wanted him even though he had irrevocably broken her in the past. Her stomach twisted with anxiety, but he thrust into her again. She was drowning in him—in everything he used to mean to her, and in what he still could. Would he break her heart again though? Was she willing to risk it all? She stared into his fathomless eyes and found her answer.

PURCHASE NOW! On sale for 99cents for a limited time only!

It was supposed to be another shift at the bar.

Until he walked in…

The same guy who broke me.

The question now is will she risk it all again for another shot at love?