K9 and other agents: license to spy

Some of the best spies are not human.

The use of dogs by the police and search-and-rescue teams is well known. But the American military uses canines as well to sniff out hidden explosives in the Middle East combat zones.

Critters have been used in espionage work since ancient times, when the Greeks and Romans used homing pigeons to carry messages back and forth over enemy lines.

In the third century, some armies were using elephants to transport troops. Elephants do not like the sound of squealing pigs. Cities that were under attack would torture pigs outside the city walls to make them squeal, and the noise frightened off the elephants.

During World War 1, allied soldiers used glowworms to light their trenches at night.

The troops sent trained pigeons to fly ahead of the units. The birds signaled the presence of the enemy ahead by landing. However, the birds just kept going if the coast was clear.

World War 2 saw the return of homing pigeons to carry messages to avoid the interception of radio transmittions. The allies parachuted 16,000 pigeons into Europe during the war.

The Germans employed homing pigeons to carry communications into England. When the British discovered this tactic, they brought in hawks to kill the incoming winged messengers.

American forces worked with the idea of putting pigeons inside the nose cones of missiles. The bird could steer the missile by pecking a specially rigged steering device. But did the scientists plan a way for the pigeons to escape the missile before it exploded? Fortunately for bird lovers everywhere, the project was abandoned.

But the CIA continued to use birds. They trained ravens to leave a piece of slate that contained a radio transmitter on enemy windowsills in Eastern Europe. The devices could pick up conversations inside the room. The bird’s handler pointed a laser beam on the window where the raven was to land, and the bird followed the light. The ravens could also enter a room through an open window, open a drawer, and use its beak carry out small items such as manila file folders.

In the 1950s the Pentagon began using bottle-nosed dolphins in the Marine Mammal Program. The dolphins’ sonar abilities could detect the movement of enemy submarines as well as divers who were planting underwater mines. Dolphins also were used in the Gulf War to locate mines in enemy waters before battle cruisers could safely enter the area.

One of the more infamous projects was “Acoustic Kitty.” In the 1960s the CIA wanted to listen in on conversations by Russian spies who met in parks as well as an Asian head of state and others. A cat wandering by would not attract attention, so scientists tried rigging a feline to use as a mobile radio transmitter. They ran a wire from the cat’s inner ear to a battery implanted in the rib cage. The cat was directed by ultrasonic sounds. The kitty could easily be smuggled into a country via a diplomatic pouch.

Urban legend says during a test run a taxi hit the cat. However, a source involved with the project denies this statement. Finding the truth will be difficult, as much of the CIA’s work is still classified and one blogger that I read said the agency will not divulge information about this or other projects.

The CIA also toyed with the idea of implanting tiny transmitters into grasshoppers and other insects, to eavesdrop as a literal “bug on the wall.” However, with the rise of technology such as drones and miniature equipment, critters are no longer needed for such missions and the agency has shut down its animal experiment division.

The Israeli army tried using gerbils to detect terrorists at airports. The creatures can detect the changes that occur in the human body when a person is tense or agitated, as a terrorist might be before setting off a bomb. However, the gerbils could not tell the different between a criminal and an innocent passenger who was simply afraid of flying.

The TV spy show “Mission: Impossible” used animals twice. In “The Seal,” a trained cat named Rusty was fitted with a headpiece to receive voice commands from Barney. The cat then entered an “impenetrable” vault to carry out a small jade piece in its mouth.

In the episode “Chico,” a small dog retrieved a framed rare stamp from a secured room (the stamp had a microdot on it). An IMF agent placed a homing device on the back of the frame. Chico was lowed down an airshaft inside a basket. The device on the frame transmitted an ultrasonic signal that led the dog to the target. He picked up the frame with his mouth and took it back to the basket to be hoisted up.

My new Psychedelic Spy series has a pet cat named Ceebee. He plays a part in getting the heroine in—and out—of trouble. In future books I plan to expand Ceebee’s role and make him a valuable asset to the human spies. 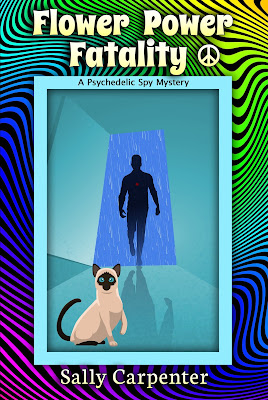 The Cold War gets cozy in this retro-cozy spy caper set in 1967, a year of music, miniskirts—and murder! Actress Noelle McNabb works at the Country Christmas Family Fun Park in Yuletide, Indiana, but she longs for the bright lights of Hollywood.
Real-life drama comes her way when a stranger with a fatal gunshot wound stumbles across her doorstep. When she attempts to finds the man’s murderer, Noelle encounters a super-secret spy agency, SIAMESE (Special Intelligence Apparatus for Midwest Enemy Surveillance and Espionage). SIAMESE recruits Noelle on a quest to find missing microdots under the guidance of a street-wise agent, Destiny King. As Noelle goes undercover in a cheesy nightclub and faces the enemy in late-night chases, she uncovers family secrets and finds her moral values put to the test. Along with her pet cat, Ceebee, and the kooky residents of Yuletide, Noelle discovers it takes a village to catch a killer.
About the Author 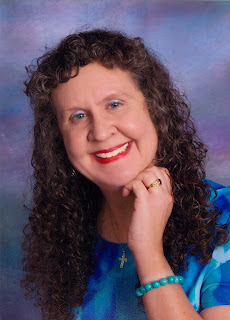 Sally Carpenter has a master’s degree in theater from Indiana State University. While in school her plays “Star Collector” and “Common Ground” were finalists in the American College Theater Festival One-Act Playwrighting Competition. “Common Ground” also earned a college creative writing award and “Star Collector” was produced in New York City.
Carpenter also has a master’s degree in theology and a black belt in tae kwon do.
She’s worked as an actress, college writing instructor, theater critic, jail chaplain and tour guide/page for Paramount Pictures. She’s now employed at a community newspaper.
In her Sandy Fairfax Teen Idol series are: “The Baffled Beatlemaniac Caper

” and “The Quirky Quiz Show Cape

r.”
She has short stories in two anthologies: “Dark Nights at the Deluxe Drive-in” in “Last Exit to Murder” and “Faster Than a Speeding Bullet” in “Plan B: Omnibus.”
She penned chapter three of “Chasing the Codex

,” a group mystery written by 24 authors with Cozy Cat Press, and writes the Roots of Faith column for the Acorn Newspapers.
She’s a member of Sisters in Crime/Los Angeles.