Blog Tour, Review, & Giveaway for Jaclyn and the Beanstalk by Mary Ting 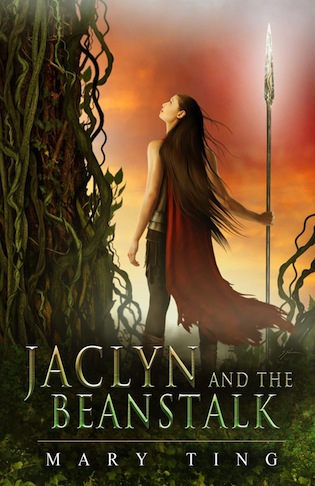 
What fate awaits a girl who hears monsters at night…
Sixteen-year-old Jaclyn looks up to her father. An honest man who once fought for the king, he now teaches Jaclyn how to use her wits—and her sword.
But he has a secret. And his secret may have a connection to the one thing Jaclyn is hiding from him.
Upon hearing “monsters” are terrorizing the small villages around Black Mountain, Jaclyn’s father and his friends head out to hunt them … but they don’t return.
Armed only with her sword and three magic beans—a gift from a mysterious old woman—Jaclyn sets out for Black Mountain to save her father.
On her climb, one bean drops and grows into a beanstalk, catching her when she falls.
She isn’t the only one that takes the ride. Jack, her childhood friend and secret crush, is following her.
Together, Jaclyn and Jack must battle to save not only their fathers, but the townspeople the beasts plan to lay waste to before it’s too late.

Not your traditional Jack and the Beanstalk story. This one is even better as we follow Jaclyn a 16 yr old girl raised pretty much in the middle of no where. She gets curious when monsters start coming around as well as some other strange things. The bartenders of the original exist but the twists are so unexpected that it really keeps you guessing. In conjunction with the best world building we get a story that is hard to put down. Great for a wide range of readers. I really liked it so I give it 4/5 stars.


International Bestselling Author Mary Ting/M. Clarke resides in Southern California with her husband and two children. She enjoys oil painting and making jewelry. Writing her first novel, Crossroads Saga, happened by chance. It was a way to grieve the death of her beloved grandmother, and inspired by a dream she once had as a young girl. When she started reading new adult novels, she fell in love with the genre. It was the reason she had to write one-Something Great. Why the pen name, M Clarke? She tours with Magic Johnson Foundation to promote literacy and her children's chapter book-No Bullies Allowed.