Tell us a little bit about yourself--both something we learn from [the story] and something that readers might not guess?
My name is Hayley Snow and I am a food critic for Key Zest, an ezine published in Key West Florida. I’ve been here a couple years, and every day I love this island more. I’ve also grown to love a detective here in town, and if all things fall into place, we hope to be married at the end of the week. I live on a houseboat with my octogenarian roommate, Miss Gloria, I know that sounds crazy, as what twenty-something wants an 80-year-old roommate? But she has the energy of a teenager and the wisdom of an older person and she keeps me laughing and grounded.

How did you first meet your writer?
Circumstances were not auspicious for me when I met my writer, Lucy Burdette. I made the gaffe of following a man I barely knew to Key West (from New Jersey.) You can guess how that went – me and my cat and his litter box and all my belongings were out on the curb in front of his fancy condo within six weeks. Worst of all, his new girlfriend was the publisher of Key Zest, where I was desperate to land a job. Things only got worse when she turned up dead, because of course I was a suspect. Back in those days, I was one part dizzy, one part hysterical, and one part absolutely determined to plant myself permanently on this island where I had landed. (See An Appetite for Murder to get that whole story – it’s a doozy!)

Want to dish about him/her?
I don’t want to say too much, because Lucy is in charge of my life’s direction right now. But I am a much better cook than she is! And she’s always asking me why. Why would you get involved with this situation? Why is it important to rush into a burning building? And wouldn’t you benefit from a little stretch of psychotherapy? (She’s a clinical psychologist in addition to writer.) To that I say a flat out no. I have friends to bounce things off of, including my psychologist pal Eric, and Lorenzo, who is brilliant with Tarot cards and life in general.

Why do you think that your life has ended up being in a book?
See number two above LOL. Also I think half the attraction of me and my story is the town of Key West. It’s beautiful and tropical and funky and filled with all kinds of interesting characters and problems and great food too!

Who's your favorite character? Why?
I have so many good friends here – I’ve mentioned Eric and Lorenzo. And I’m also lucky that my wonderful mom and stepmother live here, along with my roommate from college. But I have to say my favorite person is my current roommate Miss Gloria. She’s like a poster child and grand motivator for senior citizens. She doesn’t want to be left out of anything, she gives historical tours in our spooky cemetery, she loves everything I cook, and she has the best advice ever.

My least favorite character has to be whoever is causing all the trouble with my friend Analise Smith’s food tour. Somebody had it in for that poor woman who died. And my fiancé Nathan is involved with something sketchy, too. If something happens to him, I swear they’re going to answer to me.

What's next for you?
Lucy tells me I’ll be having another adventure next summer, called THE KEY LIME CRIME. In the book, it’s the week between Christmas and New Year’s and Key West is bursting at the seams with holiday events and hordes of tourists. Adding to the chaos, Key lime pie aficionado David Sloan has persuaded the city to host his Key Lime pie extravaganza and contest. I can’t escape the madness because my bosses at Key Zest magazine have assigned me to cover the event. Every pie purveyor in Key West is determined to claim the Key lime spotlight—and win the coveted Key Lime Key to the City.

And if all that wasn’t enough, my intimidating new mother-in-law is bearing down on the island without a whisker of notice… 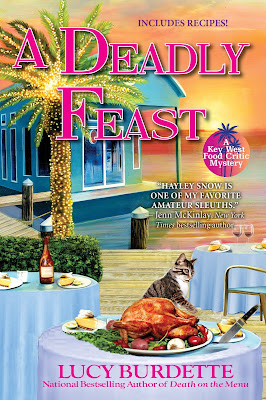