Cover Reveal for Eye of Danger by Alyssa Day 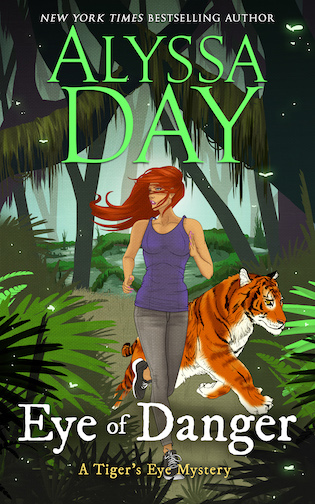 
He’s a PI who turns into a tiger.
She can see how you’ll die.
The bad guys never stood a chance.
EYE OF DANGER: The longest and most twisty installment of the Tiger’s Eye mysteries yet!
When Tess Callahan’s long-lost and presumed-dead father comes back to town, running from the mob, she’s not sure how to feel. But when she finds out the bad guys are really after her, to use her “gift” as a weapon, she knows exactly who to turn to.
When Jack Shepherd must confront mob bigwigs, a rogue vampire, and Tess’s dad all in the same day, he realizes that small towns can be every bit as deadly as the rebellion he led when he was a soldier. Tess is in trouble, and there’s no way Jack will let anything happen to her—they haven’t even gone on their first date!

Welcome to Dead End, Florida, where the pawnshop never, ever deals in vampire teeth. And welcome to the Tiger’s Eye Mysteries!


Alyssa Day is the New York Times and USA Today bestselling author of more than forty novels filled with kissing, laughter, mystery and magic. Alyssa's paranormal series include the Poseidon's Warriors and Cardinal Witches paranormal romances and the Tiger's Eye Mysteries paranormal mysteries. In an Alyssa Day book, the good guys (and gals!) always win and happily ever after always prevails!
Alyssa's many awards include Romance Writers of America's prestigious RITA award for outstanding romance fiction, and the RT Reviewer's Choice Award for Best Paranormal Romance novel of 2012. Her books have been translated into a zillion languages but she's still holding out for Klingon.