I am so excited that ECRIVAIN by Elizabeth Dunlap is available now and that I get to share the news!
If you haven’t yet heard about this wonderful book by Author Elizabeth Dunlap, be sure to check out all the details below.
This blitz also includes a giveaway for a finished copy of the book and swag, courtesy of Elizabeth and Rockstar Book Tours. So if you’d like a chance to win, enter in the Rafflecopter at the bottom of this post.
About the Book: 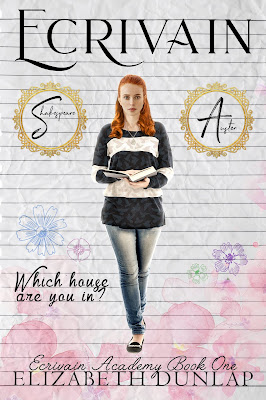 Welcome to Ecrivain Academy.
Here in these storied halls you will be trained to become one of the greatest writers the world has ever known.
There are poetry battles.
Friends. Enemies.
Is your story a romance?
Or is it something darker?
Explore all Ecrivain has to offer.
That is, if you can survive until graduation.

Daydreaming was something I did every day. Yes, some of it was about Blades, as was to be expected of teenage girl hormones. The rest was about other things. How I’d fit in my favorite novels or tv shows, or what if this had happened in history instead of what actually happened.
Sometimes I daydreamed about things I made up and that was how I’d come up with the story about the dog and the squirrel. I saw someone walking their Labrador retriever across the street from my science class and watched as it tried desperately to catch a ground squirrel, even after the rodent had disappeared into its hole in the ground. Something sparked inside me, and I immediately flipped a few pages away from my science notes and wrote until the bell rang.
The dog and squirrel had lived in the same yard for all their lives, and the squirrel was convinced he and the dog were best friends. The dog had no such preconceptions and tolerated the squirrel’s antics until one day the squirrel didn’t come out of its tree, and the dog realized he missed his friend.
I knew the story wasn’t very good, but writing it made me feel alive, and as I sat in Algebra daydreaming about other things, I tried to convince myself that I was going to succeed at writing. My resolve was short-lived because I went home and remembered how life really was.
That was how I felt that day when I trudged up the stairs and dumped my bag onto my bed before changing out of the now dry jumper. My skin still had an edge of stick to it, so I walked to the bathroom to clean up. The large rectangle mirror showed a thin weed-like girl with freckles and red hair that was neither curly nor straight. I turned to the side and frowned at my lack of curves. I was still as skinny as I was before puberty. Shopping in the juniors section while everyone else had moved onto the women’s section was humiliating, not to mention I was the only fifteen year old who hadn’t grown proper breasts. A groan escaped my lips and I leaned forward to scowl at all the freckles that dotted every inch of my skin. I looked like a Dalmatian.
“If you stare harder, maybe you’ll stop looking like a turd face,” my little brother squeaked from behind the bathroom door. I caught his eye in the mirror and the sight of my angry face sent him off running down the hall. My feet flew out of the bathroom, through the hallway, down the stairs, and into the living room where he’d hidden behind something.
“Penny, you are so dead!” I shouted to him as I bent around looking for his hiding spot.
“Language!” I heard from the kitchen, right before my mother poked her head out from the archway that separated the two rooms. She looked at me with pursed lips and wrinkled disapproval. It took me a few seconds to realize that she was mad at me for saying the word ‘dead.’
I pointed to the couch where Penny was hiding. “Penny called me a turd face.”
Instead of coming to my defense, because she never did, Mom sighed heavily. “Calliope, act mature. This doesn’t become you.” She turned and went back into the kitchen. My mouth curled in anger at her retreating back. She was so mean sometimes. Why couldn’t she be fun like Kathryn’s mom? Kathryn’s mom let her do whatever she wanted, while my mom still insisted I hide my eyes when Aragorn decapitated the Uruk-hai in Lord of the Rings. Spoiler alert: I’ve seen blood before, Mom.
Seeing that I wasn’t paying attention, Penny crawled out from the couch and launched himself at my leg. “Alien attaaaaack!” he screamed. “I’m going to suck your brains out your butt hole!” I kicked at the leg he was attached to and looked hopefully at the kitchen to see if Mom would reprimand my brother for saying ‘butt hole,’ but she failed to appear. Typical.
“Penny,” I growled in annoyance. “Why are you being such a brat?”
“I’m not a brat! You’re a brat!” he retorted and stuck his tongue out at me.
“Don’t call your brother a brat,” Dad ordered from the front door. Him too? Of course, I forgot. It was pick on Calliope day. Every day was pick on Calliope day.
“Make him get off,” I whined, hoping one parent would have some sympathy on me.
“It’s time for dinner.”
Mom’s words made Penny fly off of me faster than a page load. He didn’t bother making sure I was okay, and his retreat almost knocked me over, slamming me into the edge of the coffee table. Pain sliced through my leg and I bent to checked the area. No blood. I limped over to the dining table where Mom had decorated the room like we were being filmed for HGTV. Flowers in vases, flowers in buckets, flowers in tiny wheelbarrows, and so. much. burlap.
I sat down in my country style ladderback chair with weathered paint and watched Penny kick his chair repeatedly as he swung his feet back and forth. My father, already sitting at the head of the table, ignored the noise and damage to the chair. I smiled when Mom came into the room and placed a large dish of roast beef stew on the table. She didn’t smile back, but that was okay.

About Elizabeth:
a
Elizabeth Dunlap is the author of several fantasy books, including the Born Vampire series. She's never wanted to be anything else in her life, except maybe a vampire. She lives in Texas with her boyfriend, their daughter, and a very sleepy chihuahua named Deyna.

1 winner will win a finished copy of ECRIVAIN & Swag, US Only.

a Rafflecopter giveaway
Posted by Books a Plenty at 12:30 AM