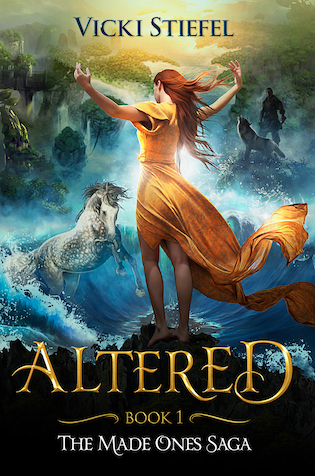 
The Eleutians are dying out, one female at a time. To save their species, the powerful Alchemic Clan conscripts women from parallel worlds, altering them into the perfect breeding stock.
Kitlyn, a retired circus equestrian broken in both body and spirit, awakens on a strange world in her own much-younger body. She has been transformed into a Made One, but the gift of youth and the promise of a new life come at a terrible price.
Rafe, the Wolf Clan’s warrior champion, vows to find the cause of the species’ decline. He’s certain the Alchemics’ bid to save the Eleutians is but a thin veneer masking a dark purpose.
That vow becomes hard to keep with the threat of an inter-clan conflict and the arrival of the proud Made One named Kitlyn.
To save herself and those like her, Kit must carve a dangerous path in this new reality and make a choice that may cost her her freedom, her life, and the life of the Eleutian warrior she’s come to love.

Talk about some world by building!! This book hits the ground running as we meet Kit and her sisters. They are all in their fifties with a myriad of health problems along with Kits scars from an accident. They are taking a bike while they still can when everything changes. Kit wakes up in a new world encased in her own younger body fully healed. This leads to all sorts of questions though she doesn't always like the answers. A suspenseful fantasy novel that will take you on an adventure that you will never see coming. I really liked it so I give it 4/5 stars.
Goodreads / Amazon / Barnes & Noble / iBooks / Kobo


Vicki's fantasy romantic suspense series, The Afterworld Chronicles, launched with Chest of Bone, followed by Chest of Stone and Chest of Time. She is currently pounding the keys on her series' fourth novel, Chest of Fire, and the first in a new series, The Made Ones Sags: Altered.
Her mystery/thrillers include Body Parts, The Dead Stone, The Bone Man, and The Grief Shop, a Daphne du Maurier prize winner. All feature homicide counselor Tally Whyte. All are available as ebooks.
She co-wrote (with Lisa Souza) and photographed the 10 Secrets of the LaidBack Knitters. With her late husband, William G. Tapply, she ran The Writers Studio workshops in creative fiction.
Vicki taught fiction writing and modern media writing at Clark University.
She loves both a well-crafted sentence and unlocking the doors of a student's imagination.
She grew up in professional theater and planned to become an actress, with a bent for song and dance. She didn't. Instead, she's been a professional photographer, a high-school teacher, a hamburger slinger, a scuba-shop manager, and an editor.
She's Blake's and Ben's mom, her favorite role of all.
Her passions include scuba diving and fly fishing and knitting; photography and movies; vinho verde and bourbon (not together!); Maine lobster and chocolate (also not together!); and musical comedy scores, which she sing in the shower, unfortunately not an Equity venue; and a fascination with people in all walks of life.