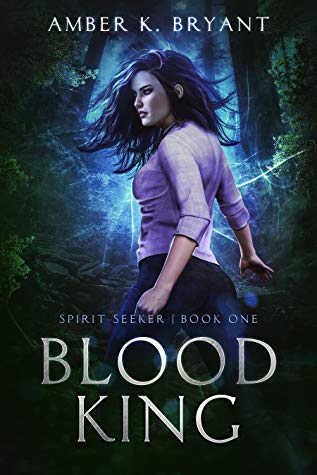 
While the Blood King lives, no one is safe.
Sybille Esmond never wanted to inherit her family’s weird business: summoning spirits of the undead and guiding them to the afterlife. While it pays the bills, dealing with supernatural monsters comes with colossal risks, including becoming undead herself.
When tall, dark, and undead Elis Tanner, a reformed member of the soulless ever-after, invades Sybille’s life, bringing with him a possessive, disembodied ex-wife, those risks get complicated, and those complications become dangerous.
Sybille must aid Elis in confronting his jealous ex while also investigating the Blood King, a beast who refuses to die—by stake or by poison.
After a harrowing possession leaves her burned and bruised, Sybille finds herself drawing closer to the tempting Elis, who may be the only one capable of helping her kill the unkillable. With the Blood King and his legions of undead closing in, she discovers her own life is far from the only thing in jeopardy.

Goodreads / Amazon / Barnes & Noble / iBooks / Kobo
—
EXCERPT:
Unlike most of the people in attendance, Sybille Esmond hadn’t come to the county fair to watch a rodeo show or stroke the glossy fur of ribbon-winning show rabbits.
She came to be hypnotized.
Sybille stood among the selected volunteers as the would-be hypnotist, Elis Tanner, circled them, his scrutiny of his subjects aided by a flourish of his hands to the waiting crowd. Their environment presented a jarring mix, up-tempo techno music blaring like a nineties rave set against rainbow-themed carnival tents and food stands hawking deep-fried butter.
Elis raised his uplifted arms higher, mimicking a conductor about to direct an orchestra. As he closed his hands into fists, the music cut out. The crowd stopped their chatter, blueberry snow cones lowered, gazes raised as the man on the stage commanded their attention. A chill ran up Sybille’s spine.
They were ready to be entertained and mesmerized, and though Elis Tanner had yet to do either, people were already leaning forward, hushing young children, silencing their phones.
The music came on again, another driving beat. Its vibrations tickled Sybille’s toes.
She couldn’t blame the crowd for wanting to be tricked in exchange for a bit of harmless fun. Only in this case, they weren’t being tricked, not the way they imagined.
And Elis Tanner was far from harmless.
“How many of you have been hypnotized before?” He spoke with a vaguely British inflection, like someone who had lived stateside long enough that only scraps of their original accent remained. It reminded her of black and white movie actors. Cary Grant but a bit less Bristol.
A few people raised their hands, garnering a knowing smile from him. Sybille kept hers down. “The truth is, you’ve all been hypnotized multiple times. Every one of you.”
The audience shifted. Sybille remained still. Elis was right: hypnotism was no magic. Not under normal circumstances. Today’s show would present a different story, however. If he was nothing else, Elis Tanner offered the most abnormal of circumstances Sybille had ever come across.
“Hypnotism is simply another state of consciousness, no different than the ones we pass through on the way to and from sleep,” he explained to them.
He searched the audience with clear grey eyes and then turned his gaze to the volunteers, stopping at her. It was a slight hesitation most would have missed, but Sybille was determined to miss nothing. In the briefest of pauses, perhaps there lay a hint of recognition.
Or perhaps not. Either way, Sybille must tread carefully. The enraptured audience had made themselves totally vulnerable. She glanced at her fellow stage-mates. They’d been naive enough to volunteer in handing their will over to him to play with for an hour. Sybille volunteered as well, but unlike the others, she did so with full knowledge of what she was getting herself into.
The music continued to blast. Intolerably loud, it forced its way into her, her head throbbing within a wall of sound.
Elis asked the volunteers to take seats in the metal folding chairs set out on the stage. “Are you ready?” He looked at her when he said this. Eleven volunteers nodded. Sybille smiled. She was ready. It was Elis who had no idea what was coming. 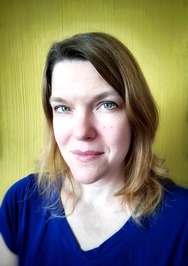 
Amber K. Bryant is an award-winning speculative fiction and romance writer living deep within Sasquatch territory in Washington State. Her stories have gained over ten million reads on Wattpad, where she has built a world-wide fan base. She collaborated on a short story with R. L. Stine and won several contests judged by Margaret Atwood. When she isn't writing, she works as a librarian and spends time with her husband and son enjoying the beauty of the Pacific Northwest. She has yet to spot Bigfoot but has faith it will happen one day. Blood King is her debut novel.