The Hotter the Days, the More We Write

Readers can thank the brutal Arizona temperatures for our summer productivity. It’s the only time we meet our word count deadlines and then some. Trust us, it’s not because we enjoy sequestering ourselves in the house from noon until dusk, it’s because we don’t have a choice. Even the dog refuses to leave when the triple temps arrive and the television stations flash “High heat advisory is in effect until…(well, winter).”

It happens every summer and yet it always seems to come as a surprise to us, even though we’ve lived in the Valley of the Sun, aka Phoenix area, for over eleven years, having moved here from New York once we figured out snow was optional. One would think by now we’d be used to writing with sweat pouring down ours neck and overhead fans running at breakneck speed, even with the air-conditioner running.

Actually, we’re fine for the first few months. May, June, and July roll blissfully by and we begin to wonder what the fuss is all about. Then, August and September arrive and it’s as if our brains have melted. And not just with writing our cozy mysteries. We re-paid bills on our banking auto-pay, making a few credit card companies more than happy, and Ann  wished the wrong people “Happy Birthday” on Facebook and a sent a condolence card to a friend who emailed us to ask, “Who died?”

Producing quality work while guzzling ice water and dripping beads of sweat at our desks or in our chairs, is a skill that we should have mastered years ago in New York. Back then it was called taking the Regents exams. At least 100 of us were crowded into a stuffy, stifling gymnasium in late June, with the desks lined up as far as the eye could see and a few miserable teachers walking up and down the aisles telling us to keep our eyes on our own papers. (As if we could focus past our own blurry eyeballs!) If we were lucky, the custodians would manage to drag in a large fan or two for the corners of the gym. About as useful as a fly swatter in the Amazon.

Unfortunately, dealing with the heat is more of an attitude than a skill. We tell ourselves that “it’s a dry heat,” but that’s like saying, “working inside of a 450 degree oven is better than laboring at the steam cleaners.”

By the end of September, we’re reached our apex and find ourselves saying such awful things as, “When are you going to kill someone off?” and “Can’t we murder a few more people?” True, cozy murder mysteries are murder mysteries, but still? How many corpses have to show up on someone’s doorstep?

Then, October rolls around and miraculously, we’re back to eighty degree days. We return to writing bucolic settings and charming characters. That is, until the next summer veers its ugly head. 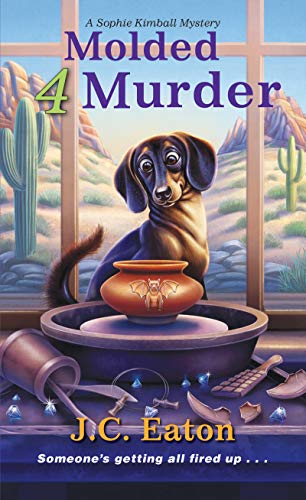 A view to a kiln …
Sophie “Phee” Kimball enjoys working as a bookkeeper for a private investigator. If only her mother Harriet could enjoy her retirement at Sun City West in Arizona—instead of constantly getting involved with retirees being prematurely put out to pasture. This time Quentin Dussler, a prominent member of the clay sculpting club, was found dead, clutching a piece of paper scrawled with Phee’s mother’s name.
Terrified she’s been targeted by assassins, Harriet begs Phee to investigate. What Phee uncovers is a complicated scheme that only the most diabolical of murderers would ever devise. And as she chisels away at confusing clues and potential suspects, Phee unearths something far more precious and valuable than she could imagine. Eager for answers, she takes a bold step—placing herself in the crosshairs of a stonefaced killer …

Sophie is always fun to hang out with. She is enjoying her job as bookkeeper minding her own business when all kinds of things start going wrong. First Marshall is wrapped up in a dangerous case stressing her out making her worry. Then Nate gets handed a case that involves her mother which causes mom to totally freak though the dog is still hilarious. On top of all that Sophie gets asked by two senior lady friends to look into some minor thefts. All of this going on makes for a fun story that will keep you guessing as to who did what making for a great time reading. A pleasurable read for fans of cozies. I really liked it so I give it 4/5 stars.

New York native Ann I. Goldfarb spent most of her life in education, first as a classroom teacher and later as a middle school principal and professional staff developer. Writing as J. C. Eaton, along with her husband, James Clapp, she has authored the Sophie Kimball Mysteries (Kensington) was released in June 2017. In addition, Ann has nine published YA time travel mysteries under her own name. Visit the websites at www.jceatonauthor.com and www.timetravelmysteries.com

(Kensington) was released in June 2017. Non-fiction in the form of informational brochures and workshop materials treating the winery industry were his forte along with an extensive background and experience in construction that started with his service in the U.S. Navy and included vocational school classroom teaching.