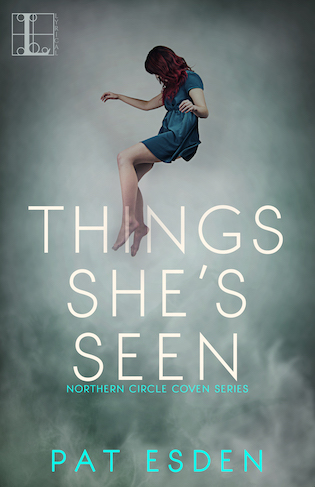 
The coven’s under investigation. Its future is in peril. And for one troubled young psychic, the coming battle will threaten her newfound freedom—and brings back a dangerous desire . . .
Exploited as a child medium, Emily Adams escaped to grow up on the streets—and hit rock-bottom. She took shelter with the prestigious Northern Circle, intent on staying only long enough to get back on her feet. But the Circle is still reeling from a devastating supernatural attack and betrayal. And vengeful High Council of Witches investigator Gar Remillard is determined to make Em surrender the truth—and disband the Circle forever.
When Em’s psychic ability allows her to see Gar is haunted by a formidable ghost, her attempts to free him challenge Gar’s rugged French Canadian heart and rancorous loup-garou instincts. But even as their new alliance and past connection kindles into raging desire, a malevolent force rises up to destroy them—the Circle and even the High Council.
With all she’s grown to love on the line, Em must draw on her darkest nightmares and alliances with the dead to outwit and out magic a force who can imprison souls with a flick of the fingers and command legions of wraiths with one word. . .

Goodreads / Amazon / Barnes & Noble / iBooks / Kobo / Google Play
—
EXCERPT:
I walked in the mist between worlds,
a ghost among the dead,
a child more lost than those I freed.
—Journal of Emily Adams
New Dawn House. Albany, New York.
Before
Slush splattered the police cruiser’s windows. Em focused on the schwup-shuwupp of the windshield wipers and tried not to think about the stench of vomit coming from the seat beside her.
Her stomach cramped. She folded forward. The floor. She needed to hit the floor this time. But the target was a narrow space, and the wooziness in her head and the handcuffs biting into her wrists made it impossible for her to lean far enough forward.
Relax. Breathe deep, she told herself. Sit still. Stay quiet.
She swallowed the taste of bile and turned slowly toward the side window, swiveling only her shoulders so the seat wouldn’t squeak and the handcuffs wouldn’t rattle. Beyond the slush-coated glass, motels flickered into view, darkness returning as they passed. An inn materialized. A life- size statue of a horse. Old-fashioned streetlights glimmered in the haze. Wet snow. Empty streets…
Her head bobbed, eyes closing. Her thoughts wavered toward oblivion. How much had she drunk, anyway? A bottle. Two. Wine. Vodka. Gin. She remembered them all. She remembered. A concert. They were going to one. Or everyone else had. No money. No ticket. Tired. Cold. A stretch limousine. Unlocked. She needed to lie down. Sleep for a minute. She’d be gone before the owners returned. The limousine’s overhead light flashed on. Someone screamed. Security. Police. She didn’t remember having drugs on her. No needles. Never needles. The cop had asked her about that.
Her forehead thumped the window, snapping her back to her senses. Slush and haze. Slush and haze. The rhythm of the windshield wipers. The world dipping and reeling—
A voice touched her ear. You stand at a crossroads, my child.
She jolted fully awake, her sixth sense screaming for her to look out the window.
In the haze, a ghost stood on the sidewalk at the entrance to a city park. Congress Park, the sign said. An older woman. Modern. Not someone from the distant past. Statuesque. Stylish coat. Boots. A cashmere scarf flowing out from around her neck. Her gray hair piled on top of her head, defiantly exposed to the elements.
The ghost of a witch.
Em knew that’s what the woman was with profound clarity, a lucidness that defied her drunken state. A lucidness that was as strong as Em’s gift for seeing and speaking with the dead.
The witch’s gaze locked onto Em’s—and across the distance she offered Em a choice to either be accepted or refused. In that frozen moment there were no second chances. This was it. She could stay on the road she was traveling or take a new one. No promise the new road would be easy—it wouldn’t be. But what Em chose to do would make all the difference.
Not just for her, but for the ghost on the sidewalk and for others as well, the living and the dead. 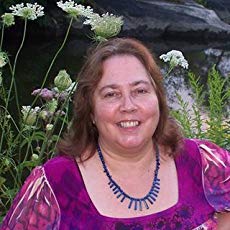 Pat Esden would love to say she spent her childhood in intellectual pursuits. The truth is she was fonder of exploring abandoned houses and old cemeteries. When not out on her own adventures, she can be found in her northern Vermont home writing stories about brave, smart women and the men who capture their hearts.
She is the author of the contemporary fantasy Dark Heart series from Kensington Books, and the Northern Circle Coven series. Her short fiction has appeared in a number of publications, including Orson Scott Card's Intergalactic Medicine Show, the Mythopoeic Society's Mythic Circle, George Scither's Cat Tales Anthology, and the Fragments of Darkness anthology.