Book Blitz & Giveaway for The Enforcer by Abigail Owen 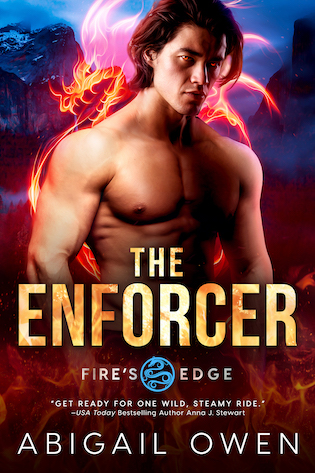 
Death comes for everyone.
Even Drake Chandali. The aging process that twists all unmated dragon shifters’ bodies into something useless has taken hold of his body centuries early. A mate could have reversed the process, but now it’s too late. To protect his team of enforcers, he leaves, and comes face to face with the woman he’d thought was human when he saved her from a fire months before.
Except she’s not human. She’s a mate.
Camilla Carrillo almost lost her family to wildfire. To discover she’s fated to mate a creature made of flame and rage, and become one herself, should be terrifying. But somehow a rightness settles inside her, especially when she’s around the glowering red dragon shifter who wants nothing to do with her.
When Drake learns Cami bears his mark—the same mark as the High King—he refuses to believe she’s meant to be his. It’s too late. How could he turn Cami only to take her with him to the grave? At the same time, he can’t walk away. Hiding her from the corrupt, rotting High King might be the last honorable thing Drake ever does with the little time he has left. 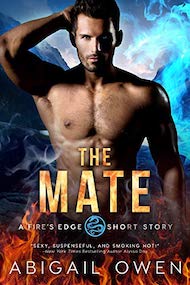 Get an early start on the series with a prequel short story to the Fire’s Edge series. “The Mate” will be available for FREE via all retailers.
Preorder:
Amazon / Barnes & Noble / Google Play
OR… Join Abigail’s newsletter to get a copy now. http://eepurl.com/Lw2XH
—
EXCERPT:
With a combination of glares, dirty looks, and curiosity filled glances, mostly from the women, they dispersed, walking away to disappear down various human-sized corridors that all met in this place.
Except Cami didn’t get the memo to leave. Drake’s voice, the familiarity of those deep, rough tones, and something else, some strange awareness, drove her feet forward into his path.
The second his gaze landed on her, Drake stilled, though his expression gave nothing away.
“Shit,” he muttered.
“Camilla?” Rune asked beside him, a million questions in his tone.
Only she didn’t look at him. Instead she stared at Drake, scrunching up her eyes like viewing at him out of focus might help.
He remained still and silent while she studied him.
A harshly handsome face stared back at her—a slash of cheekbones, strong jaw shadowed in dark stubble, jet black hair, though instead of the warmth of dark eyes she would have expected, his were an unusual, intense reddish-brown shade.
Red dragon, a vague part of her mind identified. You could always tell by the eyes.
But, while Drake’s dark glower should’ve had her heading in the other direction—that bite sharper with him, darker—fear was not what she felt. What she felt was…almost like gratitude. Trust.
A warm little sun spot somewhere in the region of her heart and a voice inside that whispered. Only she couldn’t catch the words.
A brightening around her told her that the internal glow at the center of her chest had taken on a life of its own. The way his gaze dropped then narrowed told her she wasn’t wrong. Sparks would follow any minute now, but she didn’t care, for once.
She needed to know first. “Have we—”
Suddenly, Drake pitched forward, one hand to his knees, his breathing turning harsh and erratic.
Alarm pierced that warm familiarity. “Are you okay?”
She bent over and instinctively put a hand on his back in a gesture meant to comfort. Immediately he tensed, his muscles going so rigid under her palm that she jerked her hand away.
Only he didn’t snap at her, or straighten, or make a sound of any sort. Instead, the man fell to the floor in a tangled heap of limbs, convulsing for several agonizingly long seconds, before he stopped, laying so still that almost scared her more. 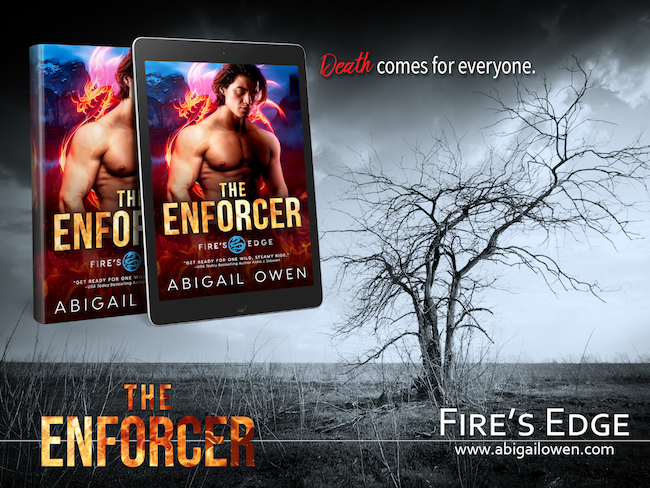 Author Bio:
Multi-award-winning paranormal romance author, Abigail Owen, loves plots that move hot and fast, feisty heroines with sass, alpha heroes with heart, a dash of snark, and oodles of sexy shifters! Other titles include wife, mother, Star Wars geek, ex-competitive skydiver, spreadsheet lover, Dr. Seuss quoter, eMBA, organizational guru, Texan, Aggie, and chocoholic.
Abigail grew up consuming books and exploring the world through her writing. She attempted to find a practical career related to her favorite pastime by earning a degree in English Rhetoric (Technical Writing). However, she swiftly discovered that writing without imagination is not nearly as fun as writing with it.
Abigail currently resides in Austin, Texas, with her own personal hero (who she totally married!) and their two children, who are growing up way too fast.