As each situation unfolds in a fiction novel, the goal is for the reader to feel as though he personally sees and experiences the events. To accomplish this goal, each scene should include the following:

What does he see? Setting: A woman wearing dark glasses and a large black hat that shaded her lower face crept through the front gate. Rosebush stickers on the fence caught at her sleeve. She paused, unhooked the thorns and then, hunched over, tip-toed down the sidewalk toward the house.
Black Cat lowered his ears and crept past the corner of the house. What is she up to His gaze swept toward the Wisteria vines at the far corner of the porch. Angel’s gold tail swished back and forth beneath the hanging purple flowers. Angel! She had chosen a new place to nap in the shade of the...
What does he think (or feel?) Perhaps this woman intended to steal something from the front porch. He crept closer. He would have to protect the family’s belongings. He could almost see the front page headlines in tomorrow’s Fern Lake Gazette. Plucky Local Cat Foils Attempted Grand Larceny. Despite overwhelming odds, the daring and plucky feline protected his master’s valuable front porch rhododendron plant from the clutches of a 200 lb. female assailant determined to…so forth and so on…Maybe his photo…
The portly woman dashed the last few steps up the sidewalk, leaned down and yanked Angel by her tail, out from under the bush.
Meow!
What does he say or do? Dialogue or Action:  Black Cat raced across the lawn. Angel! He leaped at the woman’s arm, teeth bared. The woman jerked away. His fangs caught the edge of her sleeve and ripped through the material. Having missed his target, he tumbled to the grass with a shriek. “Brett! Brett! Help! Help!
The thief waddled down the sidewalk with the wriggling cat. She struggled to open the front gate with one hand while grappling with the thrashing cat. “Stop fighting me, you little…”
Not my Angel… Black Cat sprinted through the gate, leaped over the hood of the car, and scrambled around the open car door.
Once she reached her door, the woman flung Angel onto the passenger seat, and flopped into the driver’s seat. Before she could slam the door shut, Black Cat leaped into her lap. She grabbed her purse and struck at his head, knocking him sideways. His head struck the dials on the radio and he fell to the floor, momentarily stunned. As though through a haze, he heard Brett yelling. Angel huddled on the front passenger seat, her nails clinging to the vinyl seat, frozen with fright, mewing pathetically, Black Cat! Black Cat!
****
.
Author: Using the steps outlined above, as you write each scene, your character becomes three dimensional, as you share his thoughts, feelings and actions. This draws the reader into the story making it possible for the reader to experience the events with the character as though she is walking beside him in his adventure.
To see what happens to Black Cat and Angel, go to https://tinyurl.com/vgyp89s and purchase Black Cat and the Secret in Dewey’s Diary.

About Black Cat and the Secret in Dewey's Diary 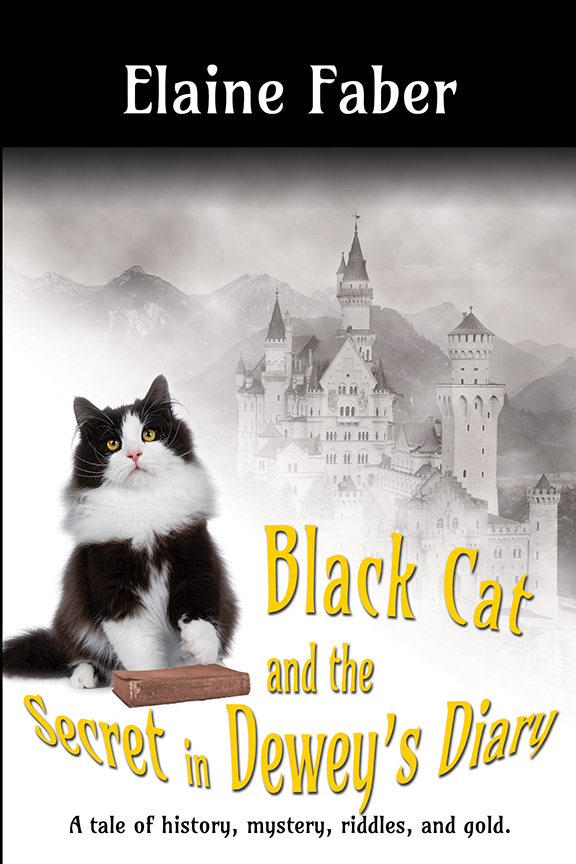 Black Cat and the Secret in Dewey's Diary: A Tale of History, Mystery, Riddles and Gold.

In this dual tale of mystery, lost treasure, and riddles, while Black Cat narrates the exciting events in Fern Lake, Kimberlee discovers a cryptic clue in a diary about a hidden treasure, and heads to Austria to solve the puzzle.
When Kimberlee and Dorian arrive in Austria, they attract the attention of a stalker determined to steal the diary in hopes the clues will lead him to the treasure first. On a collision course, it is inevitable that Kimberlee and the stalker meet in Hopfgarten.
Black Cat and Angel’s lives are endangered with the arrival of Kimberlee’s grandmother in Fern Lake, and the return of a man presumed dead for twenty-five years. With both arrivals, emotional and financial difficulties loom for Kimberlee's family. Since their return to Fern Lake, Angel seems reluctant or unable to adjust to her new home. Does she regret leaving Texas and Grandmother? And, when the opportunity arises, will she decide to leave Black Cat and Fern Lake?

Two mysteries for the price of one. Told from the POV is black cat there is a mystery from the past and present that the kitty gets Kimberlee involved in. Full of surprises and lots of fun as the story progresses. Makes for a cute cozy that is sure to please cat lovers everywhere. I really liked it so I give it 4/5 stars. 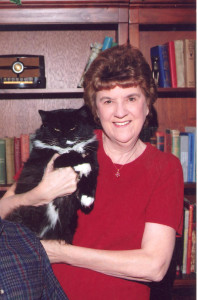 Elaine Faber lives in Northern California with her husband and feline companions. She is a member of Sisters in Crime, California Cat Writers, and Northern California Publishers and Artists. She volunteers with the American Cancer Society Discovery Shop. She enjoys speaking at public venues, sharing highlights of her novels. Her short stories have appeared in national magazines and multiple anthologies.
Black Cat’s Legacy, With the aid of his ancestors’ memories, Thumper helps pursue a cold case murder.
Black Cat and the Lethal Lawyer, Thumper accompanies his family to a Texas horse ranch where they confront wild horses, embezzling, false identities and attempted murder.
Black Cat and the Accidental Angel, Black Cat and his companion are left behind following an MVA. Taken in by a family facing personal and financial disaster, Black Cat and Angel encounter danger and a spiritual encounter.
Mrs. Odboddy-Hometown Patriot, Eccentric Mrs. Odboddy believes Nazi spies and conspiracies run amuck through her town.
Mrs. Odboddy-Undercover Courier, Mr. O carries a package by train to President Roosevelt that she presumes are secret war documents. She is equally sure Nazi spies are after her package and will to anything to deliver the package to the president.
Mrs. Odboddy-And Then There was a Tiger, Falsely accused of various crimes, Agnes sets about to restore her reputation and missing war bond money.