I’m so happy to introduce you to the first Book Magic Mini Mystery called The Secret on Rum Runner’s Lane.

The Book Magic mystery series centers around a divination called Bibliomancy. Bibliomancy uses books to reveal information about the past or the future. I find this to be such a fascinating thing to explore. If you haven’t heard of bibliomancy, well, you must pick up these books! If you’re a bookish person, I think you’ll love them.

After I wrote Murder in Devil’s Cove, I really wanted to know more about Cassie. We meet Cassie in the prologue, but other than a few memories shared, we don’t really learn much more about her.

Why did she leave her small family and the Oregon coast?

What brought her to Devil’s Cove, the Outer Banks island she ends up at.

How did she meet Leo Hawthorne?

All of these questions are answered in The Secret on Rum Runner’s Lane. It gives depth to the series, and makes the family come alive even more.

In The Secret on Rum Runner’s Lane, we also get a glimpse at Cassie’s relationship with bibliomancy, which is very different than her sister’s—and ultimately impacts her decision to protect her future children, Pippin and Grey (named after Tolkien characters!).

There will be more full length Book Magic Mysteries to come. Death on Cape Misery, written by Wendy Lyn Watson, will release on December 31st. Wendy and I are collaborating on this series. You can read more about that later in this book tour!

And there will be more Book Magic Mini Mysteries, as well, eventually dating back to the very beginning of the Lane curse. I hope you’ll follow along with the Lanes and their mysterious adventures!

Thank you for reading!

About The Secret on Rum Runner's Lane 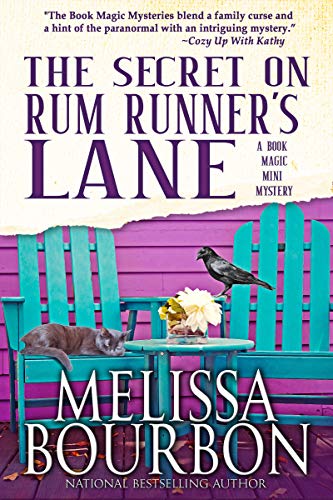 The Lane women are bibliomancers, but Cassie sees her divination not as a gift, but as a curse--one from which she desperately wants to escape. It turns out, though, that running from her fate isn’t as easy as she thought it would be. When a woman goes missing, and a neighbor turns up dead, Cassie turns to the books she’s always avoided to help her find the truth.

REVIEW
*I received a free copy of this book which I voluntarily chose to write an honest review for.
What a great start to a new series. We get a mini !mystery that makes for a fun read. Our MC is Cassie one of two sisters with the power of bibliomancy. This is when books send a message from either the past, present, or future. The sister embraces it but Cassie had tried to avoid it. To make it easier she moves to a whole different state where she can embrace her love of plants. Little did she know that her powers would follow making her listen as strange things start happening. It may be a short story but it gives a thorough introduction of the characters as well as a picturesque view of Devil's Cove. Sure to pique the interest of cozy lovers looking for a mini mystery to draw them into a new series. I really liked it so I give it 4/5 stars.

Melissa Bourbon is the national bestselling author of nineteen mystery books, including the brand new collaborative Book Magic mysteries, the Lola Cruz Mysteries, A Magical Dressmaking Mystery series, and the Bread Shop Mysteries, written as Winnie Archer. She is a former middle school English teacher who gave up the classroom in order to live in her imagination full time. Melissa, a California native who has lived in Texas and Colorado, now calls the southeast home. She hikes, practices yoga, cooks, and is slowly but surely discovering all the great restaurants in the Carolinas. Since four of her five amazing kids are living their lives, scattered throughout the country, her dogs, Bean, the pug, Dobby, the chug, and Jasper, a cattle dog/lab keep her company while she writes. Melissa lives in North Carolina with her educator husband, Carlos, and their youngest son. She is beyond fortunate to be living the life of her dreams.