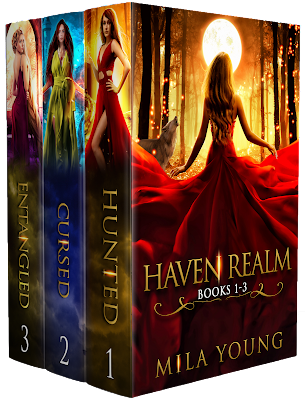 Scarlet, a healer, lives nestled in the forest surrounded by humans on one side and wolves on the other. But when a rogue wolf attacks her, she's rescued by another pack and taken deep into their den to perform her healing magic on an injured Alpha.

The wolves in the forest are under threat from a mysterious affliction, and Scarlet is the only hope they have left. Faced with a mixed pack of threatened shifters, Scarlet must use her wits and magic to survive and unravel the strange affliction now affecting the wolves... All while trying to navigate an overpowering attraction to not just one, but three of the Alphas.

Witches, wolves, magic and love intertwine in an exciting mystery that finds its own, unique, 'Happily Ever After.'

Note: Each book in the Haven Realm series is a standalone book.


REVIEW
Book one in the Haven Realm series though since it is a fairy tale retelling it totally works as a stand alone. Scarlet is a healer with powers that lives in an area where this is forbidden. So of course she attempts to hide her skills so she can stay out of dodge. The problem is that she ends up seeing something she shouldn't have and has to flee for her life right into the forbidden shifter territory. Three hunky wolf shifters find her and what follows is great as they discover they are all mates while trying to fix their many problems. The use of cape scraps was especially impressive I must say. I can say that this does not stay true to the original story line but this one is so much better with lots of magic, mysteries, and steamy sex scenes. If you enjoy fairy tales, magic, and reverse harem then you so have to read this book. I loved it so I give it 5/5 stars.

Cursed (A Haven Realm Novel)
Beauty and the Four Beasts. A Deadly Curse. A Fallen Kingdom.

With magic banned in the human realm, Bee, a powerful witch, has had to offer her services in secret. When a request to break a curse comes from the dangerous mountains and royal bear shifters, Bee is hesitant, but winter is coming and funds are tight.

At the castle, Bee finds things are not quite what she was led to believe. The curse Bee is meant to break has reached its zenith, siphoning off the Prince's life while preventing him from controlling his shifting abilities. He is volatile, angry, and far stronger than she had imagined. His brothers, who commissioned her, present her with a challenge - fix it, or lose everything.

Soon the curse is spreading throughout the castle, taking brother alike. It's a race against the clock, buffeted by dark magic, intrigue, and a strange attraction that has her looking at the four brothers in a new light.

Note: Each book in the Haven Realm series is a standalone book.


REVIEW
*I won a free copy of this book in a giveaway and I voluntarily chose to write an honest review for it.

Book three in the Haven Realm series. If you are a fan of the Beauty and the Beast fairy tale then you really have to read this book! I am a huge fan so the take on it in this one was just fantastic. We start with Bee a witch that is hired to break a magical curse on a prince in another realm. I love how she gets her herbs from Scarlet (book 1) as it ties the stories together for me though each works as a stand alone. As Bee travels to her new job she is surrounded by some awesome bear shifters and then we get to the curse which is an odd take on the story but man does it make things interesting. Her attempt to break it is just makes the story even better. The relationship development with the guys had me hooked and by the end of the story I was all in loving every minute of it. If you enjoy a fairy tale retelling with an RH twist then you really have to try this book. I loved every minute of it (including the awesome library scene) and give it 5/5 stars.

Entangled (A Haven Realm Novel)
Tangles of death, danger, and monsters. Rapunzel and her sexy shifters must escape a witch’s vengeance.

At the age of eight, Elliana lost her father, her future, and her freedom in exchange for eternal captivity. Not to mention unimaginably long hair.

Trapped in a tower by a magical gargoyle, Elliana chances a few daring and ill-fated escapes in search of a powerful, hidden weapon, which could free her and kill the stone creature once and for all. But to do that, she must summon a sly dragon shifter, a ferocious lion shifter with way too much baggage, and a devious tiger shifter. But the witch who hexed her is returning to finish Elliana. Can she save herself and the heroic three shifters she’s slowly losing her heart to before they all die?

Dragons, lions, magical hair and love merge in this heart-wrenching tale that finds its own, unique, 'Happily Ever After.'

Note: Each book in the Haven Realm series is a standalone book

REVIEW
Best take on Rapunzal ever! This poor girl is stuck in a tower with her crazy long hair and a mean gargoyle guard. After years of this she manages to sneak out for a spell that only solves half her problems. Add in three hot shifters and things really get going. I was loving the little twists involved and the attacking hair just mad my day. Plenty of surprises and lots of action in the second half to keep you guessing. Great conclusion as well. I enjoy how these are standalones yet interconnected at the same. If you like RH remakes of classic stories then this is the Book for you. I really enjoyed it so I give it 4/5 stars. 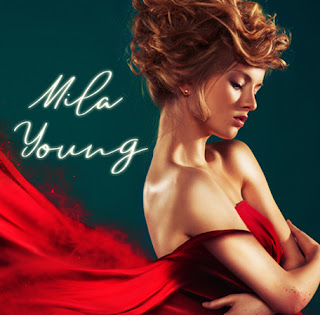 About Mila:
Bestselling Author, Mila Young tackles everything with the zeal and bravado of the fairytale heroes she grew up reading about. She slays monsters, real and imaginary, like there's no tomorrow.

By day she rocks a keyboard as a marketing extraordinaire. At night she battles with her might pen-sword, creating fairytale retellings, and sexy ever after tales. In her spare time, she loves pretending she's a mighty warrior, walks on the beach with her dogs, cuddling up with her cats, and devouring every fantasy tale she can get her pinkies on.
Sign up for Mila’s Newsletter!
Website | Twitter | Facebook | Facebook Group