Book Blitz & Giveaway for The Confessional by K. Nilsson 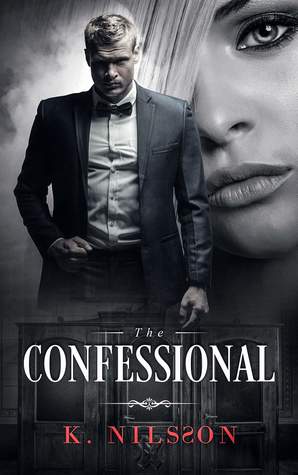 
Psychology student, Grace Fleming, is addicted to meaningless hook-ups in random places, impulsively following a script for self-destruction and bad behavior. She suffers from nightmares and a patchwork of flashbacks that leave her in a fugue state. Unsure what they mean, she goes to therapy, seeking answers. Is her mind conjuring them up or are they past encounters she’d blocked out?
Saint is a private investigator of dubious character. He will take almost any case, but his favorite includes entrapping married women into infidelity. Saint is hired to keep a watchful eye on Grace while keeping his identity a secret. The paradox tempts him; is Grace, a devil in disguise or an angel with a crooked halo? When he finds himself in a compromising position, Saint quits. He soon regrets resigning when he discovers a sinister threat to her safety, and it may be the reason for the nightmares.


—
EXCERPT:
Finn was working his shift, watching Grace from a side street near her house in Hollywood Hills. I went home to shower and eat something. Four hours later, he called.
“Grace’s going somewhere… she’s been dolling up for the last hour,” he said. “You can see that close?”
I was wondering what else he’d seen.
“If only you knew,” he chuckled. “The glass butterfly roof makes it easy viewing with the drone.”
“Do you want to follow her? If not, I can do it. I have no plans tonight,” I said.
“I need the money, boss. How about we do it together? I need to install the tracker app on her phone, and maybe you can distract her.”
I agreed. I’d wanted to meet this girl since taking the case. She hadn’t gone anywhere outside her usual radius ever since she returned home.
I was getting into the car when Finn sent me a text.
Finn: Grace is on the move, I need to follow her.
Me: Where is she?
Finn: She started up that little fireplug of hers and got on I-10 toward Santa Monica. I’m on her tail.
Me: I’m switching to the hands-free mode. I’m driving.
Finn: Oh, forgot about that. I am switching modes too.
Ten minutes later, I was right behind her.
Me: I’m on the highway. I think I see the Bug.
The VW Bug was like a toy, changing lanes seamlessly as if it were in a video game. If I got too close, Grace might see my car. It’s a little flashy for a private investigator, but it was perfect for driving in Southern California. I didn’t want to be spotted, but I wasn’t about to let her lose me. It wouldn’t be unusual for me to drive toward the beach at the same time as she, would it?
Grace pulled up in front of a nondescript little piano bar near the beach. The electric blue neon sign flashed its name, Place Pour Steaks. I got there just in time to see her hand keys to the valet and saunter in; her hips swaying from side to side.
Me? I was playing catch-up all the way. I screeched to a stop in front of the other parking attendant and tossed him the keys.
My 1962 Skylark convertible, though a little beat up, was my pride and joy.
“See this fifty-dollar bill? It’s yours when I leave if you park it over there.”
I pointed at a slot that said Reserved.
Once inside, I took two minutes to find Grace. She’d scrambled up to the bar as if the house was on fire. I looked around for the usual suspects—girls down for whatever and putting in the effort to get noticed. I wanted to meander over to Grace right away, but I couldn’t look as if I was stalking her.
She sat on the stool at the far end of the bar, her right leg elongated, the ball of the foot anchoring her in place, while she rested her left on the stool’s spindle, watching, scoping, and evaluating. It looked as though she had gone to the same school of surveillance as me.
Grace’s platinum blonde hair was in loose waves around her shoulders. She was wearing a style rich girls do well, casual, edgy, and expensive. An off-the-shoulder soft leather jacket, accented with zippers and buckles, was one breath away from slipping down her arms, even though it wrapped her upper body like a glove. A black lace strap appeared to be an afterthought. I wanted to lick her skin all along the edges of the lace and up into her collarbone.
Grace wore the RL signature crisp, white, linen shorts. She encased those long legs in a pair of black over-the-knee boots by MB, an Italian leather shoe designer. As an investigator, I notice these details. If I didn’t have a professional agenda regarding Grace Fleming, I’d know every inch of leg inside the boots. I leaned in close to her and tried to get the bartender’s attention, but instead, I hoped to get hers. First impressions were everything, but I didn’t know what kind of image I’d present, because my interest in the Fleming girl was strong. I shuttered my face into an expression I’d perfected, dispassionate eyes that veil what I’m thinking or feeling.
“Sir?” prompted the bartender.
“I’d like Scotch neat with a glass of water.”
“Would you like ice in your water, sir?”
“No,” I said, turning my palm down with a slight back-and-forth motion.
I stood close enough to Grace to inhale her scent, vanilla, and oranges, with a hint of clove mixed. It was a heady concoction. I wondered if her whole body tasted like sugary breakfast cereal. She turned toward me, and our eyes locked. 
K. Nilsson’s love of reading began with the Bobbsey twins. When she ran across some Italian True Romance novellas stashed in the attic, the musty serials hooked her on adult fiction. Though black and white photos were dramatic enough to know what the stories were about, she taught herself to read in Italian and translated them to her friends.
She’s an unapologetic reviewer of books, restaurants, and vacation destinations. An amateur photographer, K. loves taking editorial photos and documenting her travels. Her personal philosophy, sleeping is a waste of time.