KNOT ON HER LIFE
By Mary Marks

1)                  Tell us a little bit about yourself--both something we learn from [the story] and something that readers might not guess?
My name is Sonia Spiegelman, and I live in Encino, California across the street from Martha Rose. In my wild and crazy youth, I was Mick Jagger’s girlfriend for about five minutes. I have a photo to prove it; Mick and me standing together in front of the Los Angeles Coliseum where the rolling stones performed back in the 70s and 80s. The band moved on their next tour stop and Mick broke up with me. But in a good way.
After that, time seemed to slip by. I looked in the mirror one day and saw the middle-aged woman I’d become. No friends and no social life. Then I had this brilliant idea that I could make a difference in the world by becoming a foster mom. So I applied and was certified to be an emergency mom only. They said my age and a health condition prevented me from offering long-term care.
The first kid they brought to me was an eight-year-old girl named Poppy. She’d been traumatized by the double murder of her parents. We bonded immediately. But you’ll know what happened to both of us when you read Knot on Her Life.
2)                  How did you first meet your writer?
I met Mary Marks while she was writing her first book in the Quilting Mystery series, Forget Me Knot. She didn’t have very many positive things to say about me until the second book, Knot in My Backyard, where she made me a hero.
3)                  Want to dish about her?
Well, because we’ve been together for a few years, I do know some secrets about her. Did you know that her first book was published when she was 70?  I’ll bet you didn’t know that at the age of 75 Mary Marks got married again after being divorced for 34 years. I don’t know if you know this either, but she dyes her gray hair turquoise, purple and navy blue. She also wears a diamond stud in her nostril.
4)                  Why do you think that your life has ended up being in a book?
I’m a free spirit, a quality I happen to know that Mary Marks values. I’m also a frustrated flower child. I never wanted the “groovy” days of the 70s and 80s to end. So you’ll often see me wearing clothes from that era.
5)                  Who's your favorite character? Why?
Well, you know I love Martha. But my favorite of all time is Crusher, Martha’s fiancé. His street name is Crusher, but his real name is Yossi Levy. He’s such a hunk. Big. Six foot six inches and 300 pounds of muscle. But he’s a teddy bear underneath. When I first saw him in Knot in My Backyard, I developed a huge crush. I was devastated to discover that he and Martha had this thing going. Now, of course, I have my own thing going. If you read Knot on Her Life, you’ll know what I’m talking about.
6)                  Who's your least favorite character? Why?
I think that would have to be the killer in Knot On Her Life who threatened both me and my foster daughter, Poppy.
7)                  What's next for you?
I’ll continue to care for the poor kids who end up in the foster system of LA County. They are underserved and often fall through the cracks because there aren’t enough qualified people to place them with. I mean, the social workers have such huge caseloads, they can’t possibly look out for all the kids they’re responsible for. And, I’m going to keep the purple streaks in my hair. I think they add a certain mystique, don’t you? 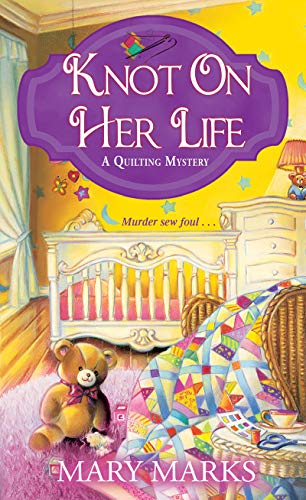 Knot on Her Life (A Quilting Mystery)

While quilter Martha Rose awaits the birth of her granddaughter, a neighborhood girl appears at her door with a mystery that can’t be pinned down . .
Martha’s eager to finish the baby quilt she’s making for her new granddaughter, but she scraps those plans when a young girl rings her doorbell begging for help. Poppy Halaby, the foster child of Martha’s neighbor, is an orphan whose parents were murdered by a killer who was never caught. When Poppy’s doting foster mom falls suspiciously ill, Martha is determined to keep the child safe. But she’ll have to unravel more about Poppy’s parents to stitch a broken family back together again—and prevent another crime cut from the same cloth . . .

Every time I pick up a book in this series it makes me want to be a quilter even if I don't have the time to. Martha has some skill and she is creating what sounds like a gorgeous quilt for upcoming birth of her first grandchild. While working on it she gets interrupted by a sweet young girl names Poppy who needs her help with the neighbor she is staying with. The health crisis brings the two of them together is a sweet way letting them bond which causes Martha's curiosity to rise when she learns more about Poppy. It was remarkably heart warming to see all of the usual characters come together to protect one child that needs them all. The addition of cranky families, alphabet soup agencies, and a mystery really brings the whole thing together. A fantastic read that will warm your heart while it keeps you guessing. Beautifully written. I totally loved it so I give it 5/5 stars.

About the Author Born and raised in Los Angeles and the San Francisco Bay Area, Mary Marks earned a B.A. in Anthropology from UCLA and an M.A. in Public Administration from the American Jewish University in Los Angeles. In 2004 she enrolled in the UCLA Extension Writers Program. Her first novel, Forget Me Knot, was a finalist in a national writing competition in 2011. She is currently a reviewer of cozy mysteries for The New York Journal of Books at www.nyjournalofbooks.com. Readers can visit her at www.marymarksmysteries.com and https://www.facebook.com/mmarks2013