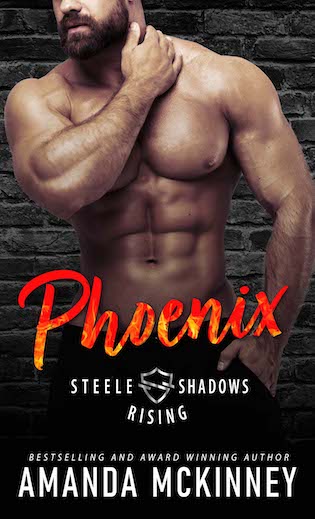 
From bestselling and multi-award-winning author Amanda McKinney comes a **standalone** romance in the bestselling Steele Shadows series.
A man who cheated death.
A woman hired to pick up the broken pieces.
And an obsession strong enough to kill for.
They told him he’d been given a second chance at life. Told him to count his lucky stars, to stop and smell the roses. Kind of hard to do when your body is bound by chains and cuffs. That’s what it felt like, anyway, when Phoenix Steele woke up from his coma to a life full of restrictions. Once known around town as the fearless, indomitable heir to the Steele fortune, the former Marine was suddenly labeled unstable, short-tempered, and loose cannon. Unwilling to accept his issues, Phoenix instantly clashes with his assertive therapist—the town’s most eligible bachelorette.
No one knew overcoming the odds like Dr. Rose Floris. Determined not to be a statistic, Rose lived her life under carefully constructed routines—until a gruesome murder and a series of mysterious events reveal she’s become the center of a madman’s obsession. Suddenly, Rose’s world is turned upside down and she finds herself under the watchful eye of her new client, a broken man she’s been warned not to trust.
As the tables begin to turn on their client-patient relationship, Phoenix realizes he must battle his own demons before he can save anyone, including the woman who’s become his own obsession…
An obsession he’d kill for.

Goodreads / Amazon
—
EXCERPT:
After taking a quick second to review my new patient’s file, I stepped into my office—and stopped dead in my tracks. The dark silhouette faced the window, sitting in my chair. His back was to me, his feet kicked up on the windowsill as if he owned the place.
The first thing I noticed was the size of his feet, two dirty cowboy boots crossed at the ankles, a trail of mud running down the wall. I literally cringed. He had brown, shaggy hair that looked like it hadn’t seen a pair of scissors in months, and a neck as thick as a tree trunk. A tattoo peeked out of the collar of a black leather jacket stretched over the widest shoulders I’d ever seen.
Although he had to have heard the door open, the man didn’t move. Yep, my new patient, whom I’d never met, had made himself right at home behind my desk in my office chair. Had he gone through my stuff? Pilfered through my space? My mind began spinning with all the confidential information he could have read on my desk. Totally unacceptable, and totally inappropriate.
Little did I know what kind of inappropriate this man had in store for me.
“Thanks for showing up.” The faceless voice was jarringly low. The man was pissed. At me.
“Excuse me?”
He kicked his boots off the window, plopping them onto the floor with a thud, leaving enough mud to fill the Grand Canyon. Another cringe.
“You’re late,” he said, still not gracing me with the front part of his body.
I blinked. No way. This was not happening. Who did this guy think he was? I bit the inside of my cheek and squared my shoulders. Professional, professional, you need this job, be professional, I reminded myself.
“I apologize, Mr…” I glanced at the name typed on the file in my hands. “Steele.”
“Phoenix.”
The chair swiveled and a flutter of butterflies rippled through me.
And I thought the voice was jarring…
His eyes were the color of a tropical ocean, a baby blue, almost iridescent, if not for the heat that spilled from them. The lines of his face were sharp with defined angles, a mirror to the disinterest he wore like a beacon, blinking brightly, making sure I knew he didn’t care to be there. Days of unkempt scruff covered his clenched jaw line, pulling my attention to a pair of lips that had me licking my own. Circles shaded his puffy eyes with wrinkles at the edges suggesting he was a good decade older than me, possibly pushing forty. A grey T-shirt fit snuggly under that leather jacket, defining a pair of pecs I could only assume were as hard as the expression he was pinning me with. I felt my weight to my tiptoes, like a magnet being pulled, assessing him with a frowned expression that I knew was giving me away. Because under all that weather-beaten, overtly masculine appearance, narrowed eyes, and locked jaw, there was a strikingly handsome man. Hidden, almost as if on purpose.
I’d never seen an aura before, but the man vibrated the air around him in a hostile, dark cloud like an animal warning of its presence. I could actually feel him in my office.
A Mighty King.
Fallen.


Amanda McKinney is the bestselling and multi-award-winning author of more than ten romantic suspense and mystery novels. She wrote her debut novel, LETHAL LEGACY, in 2017 after walking away from her career to become a writer and stay-at-home mom. Set in small, southern towns, Amanda's books are page-turning murder mysteries packed with steamy romance.
Her books include the BERRY SPRINGS SERIES and the BLACK ROSE MYSTERY SERIES, with a surprise new series being released later this year.
THE CAVE, the seventh book in the BERRY SPRINGS SERIES, is scheduled to be released August 2019. Text AMANDABOOKS to 66866 to receive Amanda's newsletter and get the latest on new releases, promos, and freebies!