Teaser for Prison Princess by CoraLee June and Rebecca Royce

Get ready for Prison Princess, a PNR suspense standalone by CoraLee June and Rebecca Royce, releasing on April 13th. 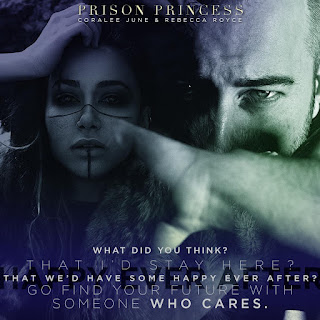 Imprisoned, tormented and forgotten...I’ve never seen the outside of these four walls. I was born in Nightmare Penitentiary, and I’ll probably die here too.Or so I thought.When an assassin captures me, I realize I’m far more powerful than anyone knows. I’m a princess. A Druid. The last of my kind. I command the earth and can see the future. There is royal blood running through these veins.It’s considered bad luck to kill a Druid, which means my captor is stuck by my side. The more time we spend together, the more we learn about the birthright stolen from me and the mage that stole it. And the longer I’m with him, the more my heart softens.I never imagined that a crack in the wall would bring help. I never thought that leaving Nightmare would put me on a much different path. A path full of hope. Of freedom. Of Love. A path that leads to reclaiming the throne, with an assassin by my side.But the future is blurry. There are two roads. One leads to happiness—to love. The other leads to demise. And even I can’t see which one wins.
Add Prison Princess to your Goodreads TBR: https://bit.ly/2uQrrps
Preorder: https://books2read.com/Prison-Princess
Posted by Books a Plenty at 12:40 PM