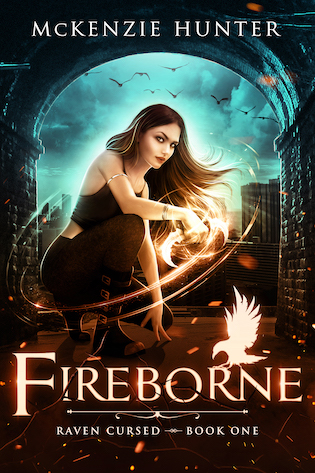 
My magic isn’t just a curse – it’s an addiction. I crave it the way some people crave chocolate. But, chocolate doesn’t kill – my magic does.
I’m Raven Cursed. When I borrow magic from someone, they die. That’s always been the case—until I met my client, the devilishly handsome and enigmatic Mephisto. He has his own brand of unique magic and a mysterious past he’s determined to keep to himself.
He knows that I’m the one to call anytime a curse goes wrong, a magical object is lost, or a rogue supernatural needs apprehending. So he offers a trade. He’ll give me his magic, and in return, I accept a job from him.
It seems like a simple deal until all hell breaks loose. We have to team up to stop a god from unleashing destruction upon the city. It leaves me to wonder: can I battle a god with the devil at my back?

Goodreads / Amazon
Other books in the series so far: 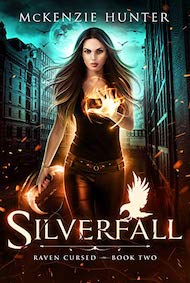 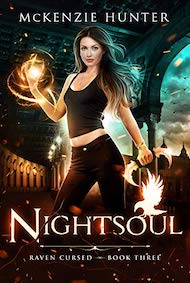 —
EXCERPT:
“She’s not what I expected,” Ava said in French. “She’s younger and more unassuming. I expected someone more menacing. Especially after the stories you told me and what I heard in passing. I was looking forward to meeting her, but it feels anticlimactic. She’s underwhelming.”
Anticlimactic? Underwhelming? I came in with a bag of weapons and accessories; what else did she want? Me stomping into the room, a sword strapped to my back, blades sheathed on each leg, and dual wielding Glocks? Dark-blue jeans and a black long-sleeve shirt was a respectable outfit. It didn’t scream total badass the way my leathers did, but I had no plans of being dragged across gravel today. Did she want me to mug her, growl like a rabid dog, hand out lollipops and slaps to everyone as I passed them? Maybe I wasn’t her image of a retrieval specialist—I really did like that title—but I was far from anticlimactic and underwhelming.
I shrugged off her comments. I couldn’t believe I cared what she thought. If I arrived in a fluffy sweater and a tutu, what did it matter as long as I got the job done?
I kept my face neutral so they wouldn’t suspect I could understand them. Spending most of my childhood at Madison’s home ensured I spoke French, although I wasn’t as fluent as I would have liked. It became a private joke in the family, that the more French spoken, the thicker Madison’s father’s Irish brogue became. On several occasions, she would grin at her father and speak French with an Irish enunciation. That he didn’t think it was as amusing as we did only increased our enjoyment.
“She’s not a merc, she’s a woman of many talents, but retrieval is her specialty,” Mephisto said in French.
True, I did a little of everything. If it made me money, I would do it. But I couldn’t put “I’ll do anything for money” on a business card or website because the calls and responses would get lascivious pretty fast. Jack/Jane of all trades didn’t work either because it cued more strange calls. People would be surprised what some considered a trade. So I kept it simple. Technically I was a bounty hunter. Merc sounded too ignoble. I operated in the many shades of gray of the human and supernatural system, but I didn’t want to advertise it. You call yourself a merc and people assume you skated right past the gray areas and went wading in the dark. Sometimes I had to, but it was never my first choice.
“That’s the beauty of her. She’s not flashy. She’s unassuming and her abilities make her tactics unique and noteworthy. That works in her favor. I assure you she’s skilled and quite impressive. After all, at this moment she’s pretending she doesn’t understand us, when clearly she does.”
My head stayed down looking at the paper, refusing to confirm his allegation. After several more minutes of looking over the contract, I looked up and feigned confusion over Ava’s scrutiny of me. Ava’s voice softened as she said something about her statements being rude before effortlessly slipping into another language that I couldn’t place.
Once I’d finished marking up the corrections to the contract, I walked over to Ava, whose presence was pleasant, although her eyes held hints of displeasure at being underwhelmed by me.
Tough. I’m not here to entertain you with a dog and pony show.


McKenzie, as a child, discovered that her life could be a whirlwind of adventures by simply opening a book. To this day, reading is still her favorite activity. She has a fondness for fantasy and mystery, which is probably why she writes urban fantasy.
When McKenzie isn't working on her next book she is usually binge-watching paranormal and comedy shows, maintaining her title as "favorite auntie", or trying to create a tasty low-calorie pizza. McKenzie loves to hear from her readers. Feel free to contact her via her website, Facebook, or email.