Blog Tour & Giveaway for Betrayal of Destiny by M.K. Adams 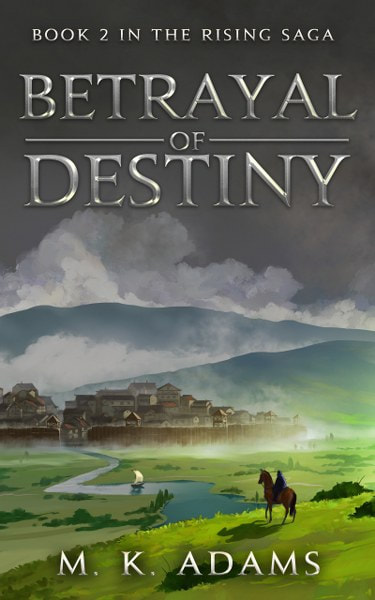 Betrayal of Destiny
The Rising Saga Book 2
by M.K. Adams
Genre: YA Fantasy

A young woman on the verge of greatness. A soldier who has lost all that he holds dear. And, the lingering shadow that watches over them both.

Five years have passed since Lyvanne joined the Spring. Her people have swelled in number, but so have the threats they face. Growing into her role as a fighter, Lyvanne must risk a daring trip to the capital to save the man she looks to as a brother from the fatal grasp of the king.

Gromwell, a soldier in the king's army, has been called back to the Rive. At the behest of his king, he must put aside the trauma of losing his loved one, set out on a mission to discover the location of the insurgent group, and find a way to put a stop to them for good. Or, risk bringing ridicule and ruin down upon his family.

Journey's will collide as opposing forces in the war for the Rive make their most critical moves yet.

A young orphan on the run from the King. A warlock with the power to protect her. And, the fighter holding them together.

The Rive, a realm ruled by the iron grip of a war-hungry King, is on the brink of rebellion and Lyvanne, a young girl who has witnessed a vision of his downfall, is the key to victory, whether she wants to be involved or not.

Forced to leave her loved ones behind, her life becomes a deadly game of cat and mouse. With the King willing to stop at nothing if it means finding the one who threatens his reign. But when a defiant insurgent group known as The Spring takes her into their protection, Lyvanne is offered something she never could have dreamed of before. The chance to fight back, the chance to make a difference.

Embark on a journey of self-discovery and political upheaval as a common street rat takes the first steps of her great journey along the paths of love, magic, and war.

M.K.Adams is a new author within the fantasy genre. He works in politics by trade but writing is where the heart lies, and he's been concocting worlds and stories since he was a child. He carried out his degree at the University of Kent, Canterbury, before moving into the private sector in London.

M.K. also has an unhealthy obsession with collecting Funko Pops and can often be found listening to the Lord of the Rings soundtrack when locked away working on his next novel. An avid reader of fantasy and all its sub-genres, M.K. is always on the lookout for the next great story.

Able to find inspiration in the smallest of details he is a firm believer that creating new worlds from scratch is one of the most fulfilling past-times. That belief also led him to the world of Dungeons and Dragons, a hobby that he believes perfectly compliments the creative outpouring of working on a new fantasy novel.

His favourite author is J.R.R.Tolkien, and he found great inspiration when he visited Tolkien's hometown (and local pub!) in Oxford.