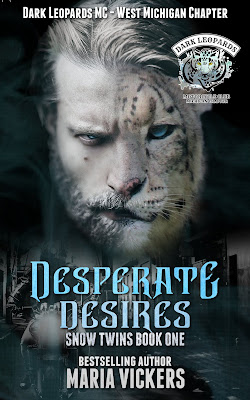 SNOW
As a young boy, abandoned by my parents and ripped apart from my twin sister, I learned early on that the world was full of evil and hate. I survived by living between the light and darkness, using my shifter abilities to stay alive…until one mistake should have cost me my life. Instead, it became my salvation and gave me a family and band of brothers who had my back no matter what.

The Dark Leopards MC was not a gang to be trifled with, and many gave us a wide birth, and as the Sergeant At Arms, I ensured that’s the way it stayed. But someone was trying to encroach on our territory and begin a war. I suspect the woman I saved, the woman whom I discover is my mate, is tied to it all somehow. I just have to figure out the puzzle before it’s too late.

VERITY
I was only trying to help a friend. The last thing I ever thought is that my friend would try to kidnap me, but thankfully someone or something saved me. Rushing to meet my roommate, Siam, I got another shock when the gang responsible for my brother’s death are her friends. I didn’t care if her brother had mesmerizing eyes or if I had a hard time not thinking about him. He was the enemy!

But even as my enemy, he may be my only chance to stay alive and learn the truth. And if Snow is the one protecting me in and out of bed, I wouldn’t complain too much.

**Previous published in Dark Leopards MC, Michigan Chapter, it has been expanded and contains new content. 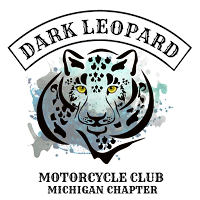 The alley was pitch black, but I could still see through the inkiness thanks to my animal counterpart. Like most other cats, snow leopards had great eyesight and could see in the dark. It also meant we could approach our prey without necessarily being detected. At the other end of the alley, a man was dragging a woman, his arm coiled around her neck, holding her tightly as she slapped and clawed at him, struggling to break free. One of her shoes was missing, her once pristine white dress had been soiled brown and ripped in spots, and her skin was marred with scrapes and cuts. I could already see some bruises forming on her arms and face. In her abductor’s other hand, the man held a large sharp knife under her chin. Holding her head high and away from the blade, she did what she could, but nothing worked. She wanted away from him and whimpered as she attempted to pull away, the tip of the knife poking her every time she did. Along the column of her neck, a red line of blood trailed down, stopping at the top of her pale breasts, which could be seen just above her low-cut sheath dress.

I saw red and fury flooded my system. I couldn’t control myself. My inner beast cried out, and before I knew it, I’d shifted without thought to where I was or who could have seen me. I didn’t care. My only concern was for this woman and taking out the bastard who dared manhandle her.

I was bigger than any normal snow leopard, but then again, I wasn’t fully beast or man. I was a hybrid of the two, and my sister and my brothers at arms were the same. Unlike Siam, though, I was a hunter, and I would catch my quarry.

This woman, the one this man dared to touch, was mine. My leopard had caught her scent, more pronounced in the narrow alley. Her emotions were making her pheromones leak from every pore on her body. Initially, I thought it was a different scent, flowery and crisp, something that beckoned to me, but it hadn’t clicked until I’d shifted. In this form, all of my senses were magnified, allowing me to see better, smell more, hear everything. Her scent wrapped itself around me, enticing me, prodding me to act and save her. The beast within me understood immediately. We were smelling our mate. The one person who would belong to me alone, and no one else was allowed to touch her. The bastard had to die for what he had done to her.

Stalking on the soft pads of my feet toward him, I yowled, warning him I was coming. Of course, being a snow leopard, it wasn’t as menacing as a tiger, lion, or almost any other kind of big cat. It came out more as a growl mixed with a seal bark, which sounded more like a whiney ass cat. It was the only drawback, but what I lacked in roar, my snow leopard made up for in spades with everything else. Besides, if he thought I wasn’t a danger to him, that was his own damn fault. I was large and could leap farther and higher than any other cat on earth. I could also spin on a dime if needed. There was no way my prey would ever be able to get away from me once I was locked onto my target.

I saw him flinch. The bastard heard my call, and thanks to the buildings, it pelted him from all angles, echoing around him, making my yowl sound more menacing than it normally did. I cried out again and watched as he looked from side to side, trying to find me up high, never looking directly in front of him. 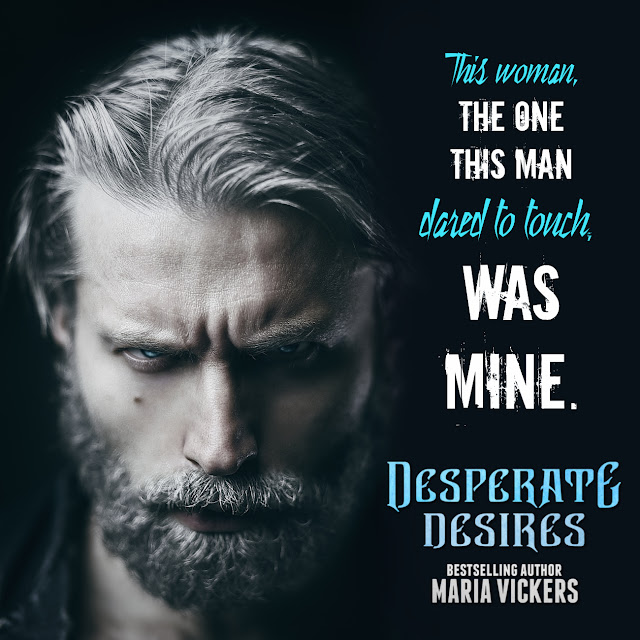 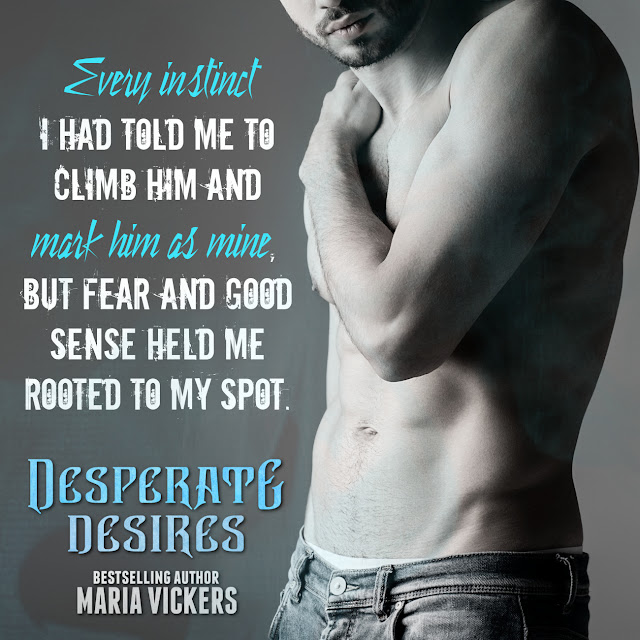 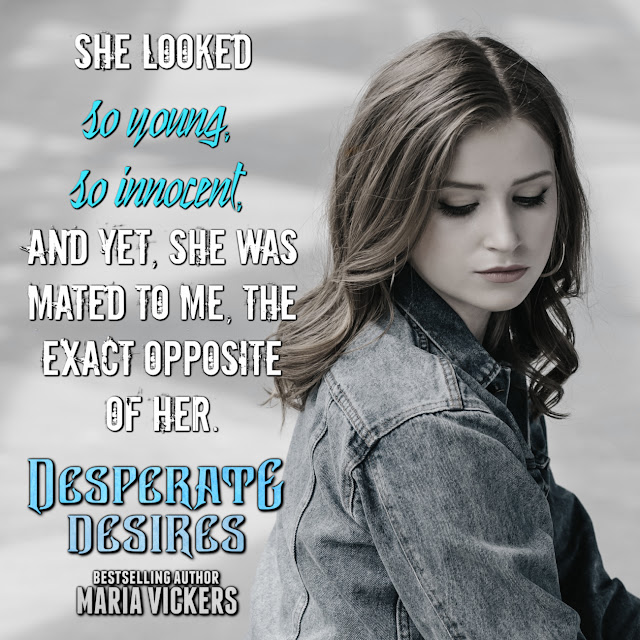 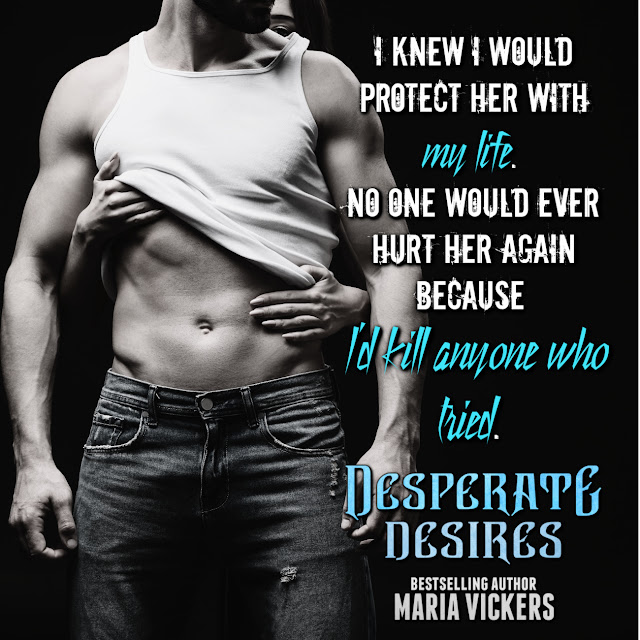 Maria Vickers is a bestselling and award-winning author who currently resides in St. Louis, MO with her pug, Spencer Tracy. She has always had a passion for writing and after she became disabled in 2010, she decided to use writing as her escape. Life is about what you make of it, you have to live it to the fullest no matter the circumstances.

From a young age, she has always loved books and even dreamed of being an author when she was younger. Growing up in the Navy, she used to weave tales for her siblings and her friends about anything and everything. And when she wasn't creating her own stories, she had a book in her hand. They transported her to another world. She hopes that her readers will have the same experience when reading her stories, and that, in some way, they can relate to her characters.

Getting sick changed her life forever, but it also opened doors for her that she thought would always be out of reach. 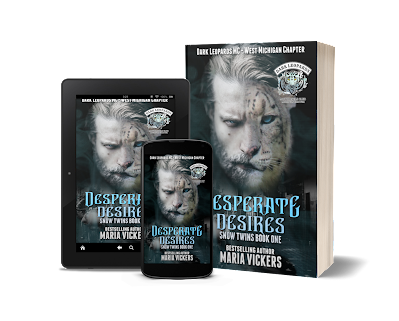