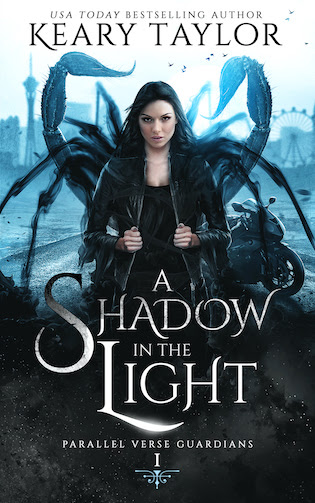 “You went and fell in love with an ultralight? That’s like a spider falling in love with a butterfly. They’re both arthropods, but the entire universe knows they don’t belong together.”

I needed an out. I needed to be someone who wasn’t trapped in Las Vegas, marooned in the LightVerse where I didn’t belong. I went to that club looking for nothing and everything, and there he was. Jaxon’s hands on my hips were just what I needed, and for one night, it was easy to be someone I wasn’t.

Then our signals went haywire. We’ve been looking for the gatekeeper for a long, long time so we can go home to the DarkVerse. We test every new ultralight in hopes they will be the key. It’s my job to bring them in.

It feels like a cruel joke when it’s him. Turns out Jaxon Gray comes from one of the most dangerous crime families in Sin City. I’m not the only one after him. The other ultralights want him just as bad, and they’ll kill me to get to him.

Now we’re on the run together. He should be scared. He’s seen me shift, and it’s not sparkly or pretty. But he doesn’t cower when he sees my darkling from—my shadows, my claws, my fangs. With a hungry gleam in his eyes, he asks to know more.

This is dangerous. He’s about to manifest. And as soon as he does, his biggest impulse will be to kill me. But it’s too late for my heart, I can’t walk away. So, the million-dollar question is: will what’s building between us be enough for him to overcome his instincts?

The room smells slightly of smoke and everything is dated by about fifteen years, but it looks clean enough to not give me an STD.

All the pain and exhaustion I’ve been ignoring in the past forty-five minutes hits me the second I walk in the door.

I walk straight to the mirror, flipping on the flickering florescent light.

It’s worse than I thought.

Bruises are blooming along the left side of my face. There’s a nice cut running down my right cheek.

I peel my t-shirt off, and immediately my eyes go to the dark black marks, the perfect shape of fingers dug into my skin.

In the mirror, my gaze shifts over my shoulder to Jaxon. He stares at my bruised and injured body, particularly those finger marks.

“Pretty sure you look worse,” I say, noting the cut above his eye that’s bleeding again.

He takes several steps forward, coming into the light. He grabs a towel from the rack, pressing it to the cut. But he never takes his eyes off me.

“Are you stalking me?” Jaxon asks. Even though we’re standing side by side, he looks at me in the mirror. “Because that night…”

“I didn’t know that night,” I said, looking sharply up at him in the mirror. “Us meeting that night was purely coincidence. There was nothing ulterior going on that night, I swear.”

He’s quiet for a second, and as I look into his eyes in the mirror, I realize how desperately I want him to believe me.

I shouldn’t want that.

I look back at my own reflection. I look like crap. “I’ve been through worse. I’ll survive. You need stitches though.”

He leans forward, looking at the cut closer in the mirror. The gash going down his face, from his temple, down the side of his eye, down to his cheek bone, is starting to bleed badly again.

I grab the sewing kit.

“You done this before?” he asks, eyeing me warily.

I set the kit on the countertop and grab his arms, positioning him under the light. I take a towel, get it wet, and set to cleaning the wound.

“More than a couple of times,” I say, not meeting his eyes as I work.

“You military?” he asks. I can feel his eyes fixed on me.

“Military experiment?” he asks, and his tone is dead serious. I guess I can’t blame him for that.

“No,” I say, my tone getting a little sharper as I set the towel down and thread a needle.

“Alien,” he says simply, like it’s the last possible explanation.

“I’m not an alien,” I say, my tone bordering on offended. “You’re never, ever going to guess what I am. So how about you just stop?”

“Then how about you just explain it?” Jaxon says with a growl. He hisses as I dig the needle through his flesh for the first stitch. “Because I thought you were just a really amazing woman I had a really amazing night with. But it turns out you’re something a whole lot more interesting.”

His choice of words snaps my eyes to his. 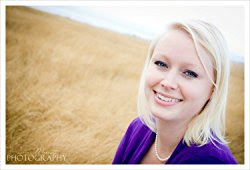 Keary Taylor is the USA TODAY bestselling author of over twenty novels. She grew up along the foothills of the Rocky Mountains where she started creating imaginary worlds and daring characters who always fell in love. She now splits her time between a tiny island in the Pacific Northwest and Utah, with her husband and their two children. She continues to have an overactive imagination that frequently keeps her up at night.