An Interview with Maybelle Johnson

My daughters think I’m crazy or maybe I should say a bit eccentric. They know I’m smart as a whip and know everyone both in Birmingham and Wheaton, Alabama, but they are convinced that just because I want them to call me Maybelle instead of Mother, Mom, or anything in that family, I’ve gone off my rocker.

The fact is that when I was at the spa in Mexico last year, I learned that if people use my proper name, Maybelle or Maybelle Johnson, it gives me a warm, happy, and strong aura. Is it too much to ask of my twins?

Yes, I’m the mother of twins – and they couldn’t be more different. For the past twenty-nine years, I’ve told people “I had a litter.” Sarah is tall, willowy, and has a thick head of dark hair that makes her twin, Emily, jealous. That’s not to say anything against Emily. She’s adorable, but when you look at her, you’ll know immediately that she was a cheerleader in high school. Their personalities are also totally opposite to each other.

Growing up, Emily followed me around the kitchen. She had a natural flair for understanding what made a recipe special. Today, she’s a gourmet chef. Emily and her boyfriend, Marcus, co-own the Southwind Pub and Southwind, a white tablecloth restaurant. Emily decided early on that she wanted to be a chef and she pursued her dream by going to the Culinary Institute of America and then working in fine dining restaurants in California and other states. It was a real surprise when she came back to Wheaton to work with Marcus.

Sarah also owns a piece of Southwind, but it’s only because the building it is in is hers and making her an owner, too, was the only way Marcus and Emily would agree to open their dream restaurant there. Sarah married Bill Blair when she was eighteen and they divorced when she was twenty-eight. It was a shock to her to know that the love of her life was having an affair. The divorce wasn’t pleasant. The only thing she got out of it was her Siamese cat, RahRah, and a lack of confidence and skills that made finding a job difficult. Happily, Harlan Endicott, a Wheaton lawyer, created a secretary/receptionist job for her. She’s come a long way in developing her skills and regaining her self-confidence.

Oh, you wonder why she didn’t go to work for Emily and Marcus? Very simple, Sarah finds being in the kitchen more frightening that murder. She’s an excellent amateur sleuth, but her idea of cooking is take-out, or something made with pre-packaged ingredients. Some of her favorite recipes when Emily doesn’t make something for her to take wherever she’s going are Jell-O in a Can and Spinach Pie made with Stouffers Spinach Souffle.

Emily tends to get wrapped up in her culinary world, but Sarah’s true blue. Her loyalty for family and friends can’t be touched. If it wasn’t for her, I might have gone to the big house. Right now, her friend Grace Winston, who is Emily’s sous chef and teaches knife skills at the junior college, is the primary suspect in the stabbing death of her department chair. Sarah is getting a lesson in slicing and dicing because there’s no time to mince words finding the real killer. I do hope she’ll be careful.

I worry about her all the time. Do you ever worry about the characters in books you read?

About Four Cuts Too Many 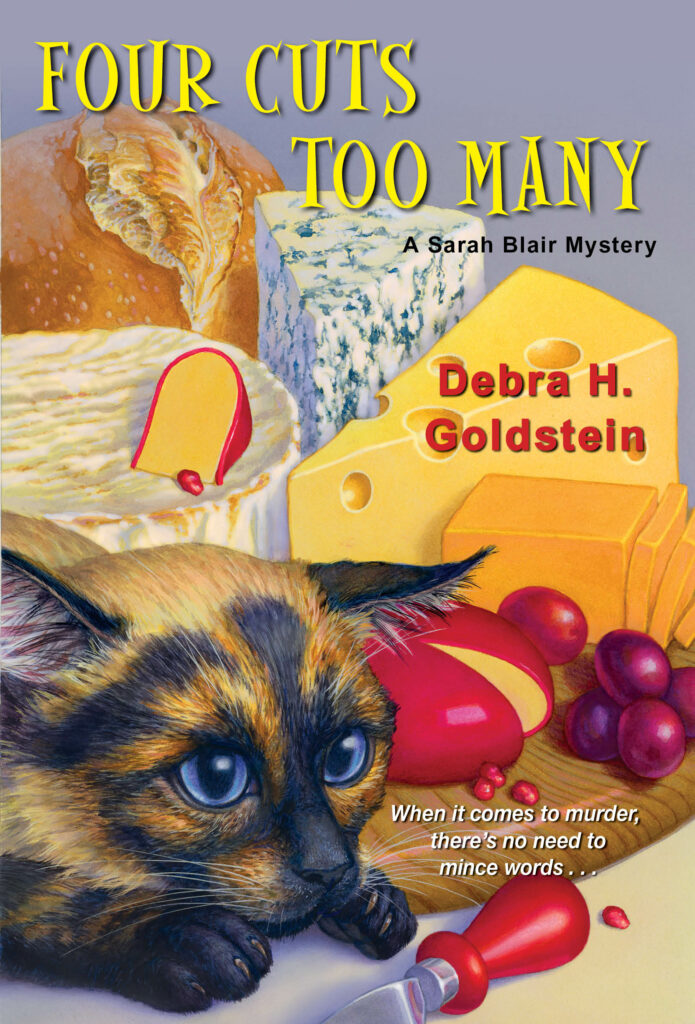 Four Cuts Too Many (A Sarah Blair Mystery)

Sarah Blair gets an education in slicing and dicing when someone in culinary school serves up a main corpse in Wheaton, Alabama . . .

Between working as a law firm receptionist, reluctantly pitching in as co-owner of her twin sister’s restaurant, and caretaking for her regal Siamese RahRah and rescue dog Fluffy, Sarah has no time to enjoy life’s finer things. Divorced and sort-of dating, she’s considering going back to school. But as a somewhat competent sleuth, Sarah’s more suited for criminal justice than learning how many ways she can burn a meal.

Although she wouldn’t mind learning some knife skills from her sous chef, Grace Winston. An adjunct instructor who teaches cutlery expertise in cooking college, Grace is considering accepting an executive chef’s position offered by Jane Clark, Sarah’s business rival—and her late ex-husband’s lover. But Grace’s future lands in hot water when the school’s director is found dead with one of her knives in his back. To clear her friend’s name, Sarah must sharpen her own skills at uncovering an elusive killer . . .

REVIEW
*I received a free copy of this book which I voluntarily chose to write an honest review for.
Sarah is back and just ad a fun as ever. Het sisters sous chef Grace asked her to meet on the local college campus after a class she is teaching. Sarah arrives having to wait awhile due to Grace being late. They finally meet but before they can talk they go back to the classroom only to find a man stabbed to death on the floor. Sarah tires to stay out of it but then all the evidence points straight at Grace. Trying to prove her innocence leads to all sorts of interactions as the story plays out keeping Sarah guessing as to who could be the culprit. Leads to a satisfying ending that will leave the reader happy. Makes for a great read for cozy fans. The adorable critters ate just an added bonus. I really liked it so I give it 4/5 stars. 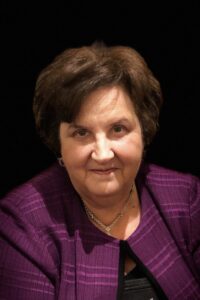 Judge Debra H. Goldstein writes Kensington’s Sarah Blair mystery series (Three Treats Too Many, Two Bites Too Many, One Taste Too Many). She also authored Should Have Played Poker and IPPY Award-winning Maze in Blue. Her short stories have been named Agatha, Anthony, Derringer finalists. Debra serves on the national boards of Mystery Writers of America and is president of SEMWA. She previously was on Sisters in Crime’s national board and president of SinC’s Guppy Chapter.

Have you signed up to be a Tour Host?Click Here to Find Details and Sign Up Today!