My name is RahRah, and I am a pure Siamese cat. It is often said that cats have nine lives, and I believe that is true. I was rescued from the swirling waters of Hurricane Katrina by Sarah Blair’s former mother-in-law when I was just a few days old. I’ve been in a few other scary situations since then, but I’ve always survived without a scratch. Today, I not only run the roost in the carriage house where Sarah and I live, but I also own it.

I met my writer, Debra H. Goldstein, when she decided to put a Siamese cat into the Sarah Blair series. Not knowing much about Siamese cats, she interviewed a friend who, over the years, had owned several. After Debra spent a few hours observing her friend’s current Siamese cat, Suri, Debra incorporated all of Suri’s mannerisms and habits into One Taste Too Many. She even paid tribute to Suri in that book when she lied to protect me by calling me Suri instead of RahRah.

I like Debra because she listens to me when she writes so that I come across as a real cat. I don’t speak in the books, nor do I have magical thoughts – I simply act like a cat. Debra gets it when I enter her subconscious and tell her how I should behave in different situations.

That’s a no brainer. I’m adorable, lovable, and have a compelling character. Besides, I’m a great listener and sounding board for Sarah. She never wanted pets; but, as she has learned, I make her life 100% better. She can’t imagine living without me – so there’s no way she could be in a book without me.

In Five Belles Too Many, I love Sarah because she loves me, but one of my other favorite characters is Sarah’s mother, Maybelle. Maybelle is one of the five finalists trying to win a perfect Southern wedding being given away by a national television show. The show requires each finalist to have a chaperone – even Mother Maybelle who is in her sixties. Because Sarah’s twin, Chef Emily, works nights and Maybelle doesn’t want to inconvenience any of her friends, Sarah is stuck being Maybelle’s chaperone. Maybelle is a hoot. She takes no prisoners, has no filter, and can tell anyone “Bless your heart” with a straight face.

My least favorite character is Jane Clark, the bimbo who broke up Sarah’s marriage and is Sarah and Chef Emily’s greatest nemesis in every way you can imagine – business and personally. Early on, she tried to take me away from Sarah for nefarious reasons. Now, I take immense joy in turning the tables on Jane whenever I can.

I’m not sure. I’ve loved being part of the Sarah Blair series, but I’m not sure if I’m going to end up in a book, novella, or short story next.

About Five Belles Too Many 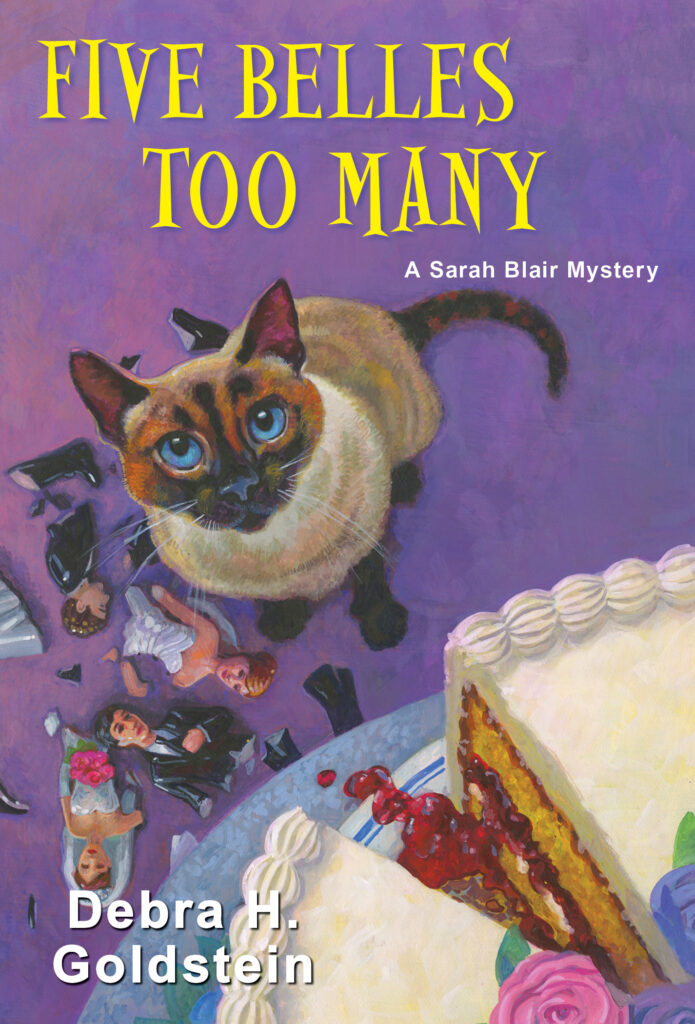 Five Belles Too Many (A Sarah Blair Mystery)

When Sarah Blair’s mother participates in a reality show competition for brides in Wheaton, Alabama, things get a little too real as a murderer crashes the wedding party . . .

Sometimes Sarah’s mother, Maybelle, can be higher maintenance than her Siamese cat RahRah. Maybelle and her friend, Mr. George Rogers, have been chosen to be one of five couples competing for a small-town “perfect” wedding and dream honeymoon on a Southern Belles reality show—and guess who has to be chaperone. Even more vexing, the producers have decided to put up the crew and participants at the restaurant/bed and breakfast owned by Sarah’s nemesis Jane Clark.

But when someone turns up dead with Jane kneeling by the body with blood on her hands, she goes from being Sarah’s chief rival to the police’s chief suspect. Neither Sarah nor her twin, Chef Emily Johnson, can stand Jane—still, they don’t think she’s a murderer. The producers vow the show must go on, but to protect their mother and the other contestants, Sarah vows to find the true killer before someone else gets eliminated . . .

REVIEW
*I received a free copy of this book which I voluntarily chose to write an honest review for.
We catch back up with Sarah and her family as her mother is set to compete on reality show for the chance at a small dream wedding. Things are bad enough when the contestants are being housed at Jane's B&B (the family nemesis), but when she has to chaperone too she just wants it to be over. Before Jane can brag about things at her place she is found kneeling over a dead body making her the prime suspect in the murder. Sarah and her twin may not like Jane very much but they can't bring themselves to believe she would murder someone so of course they have to start looking into things. With mom being right in the middle things get real interesting as the show decides to go on despite the inconvenience. Full of  a wide range of characters we get a mystery that will keep you guessing as they try to figure it out in time making for quite the fun read. A great choice for fans of cozies. I really liked it so I give it 4/5 stars.
About Debra H. Goldstein

Many, Four Cuts Too Many, Three Treats Too Many, Two Bites Too Many, and One Taste Too Many). Her novels and short stories received an IPPY award and have been named Agatha, Anthony, Derringer, and Silver Falchion finalists. Debra served on the national boards of Sisters in Crime and Mystery Writers of America and was president of the Guppy and SEMWA chapters. Find out more about Debra at https://www.DebraHGoldstein.com .