Blog Tour & Review for The Willing by Lindsay Lees

I am thrilled to be hosting a spot on the THE WILLING by Lindsay Lees Blog Tour hosted by Rockstar Book Tours. Check out my post and make sure to enter the giveaway! 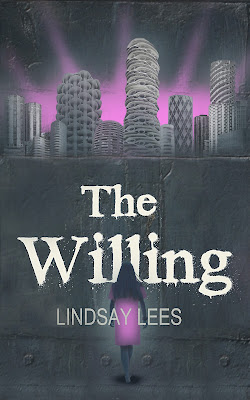 To Escape a Fully Controlled "Utopian" City-State, There Is Only One Way Out — To Single-Handedly Confront This Scary and Absurd World.

In less than a year, fifteen-year-old Gypsy Capone will be considered a woman in Ovoidia, a “utopian” city-state where every woman can be approached for immediate sex by any man, where curving architecture adds weird whimsy, sporks are the only cutlery, and true intimacy between the genders is a sign of suspect subversion. After all, if a woman just plays along, she’ll also do her job and have children, with the reward of a fine home in the “Communities,” where she and the other “Mamas” live together in harmony with everything they need. Right?

The irony: Diam and Isis, the two leaders of Ovoidia, are themselves females. Fun, yes! And just below the surface, perversely sinister. They personally execute these precise sacrifices by women to establish their “happy,” absurdly totalitarian utopia, and are backed up by their chosen army of male “crusaders,” enforcing a crime-free, fully controlled society.

Men are relegated to work in the “City” where they may “enjoy”—right there on the street if they wish—any woman they want and are welcome to satisfy their sexual and emotional needs at establishments called Gaje Clubs where only the most “gifted” among women are chosen to work.

Not surprisingly, in Ovoidia women have evolved until they feel nothing of sexual pleasure. But in Gypsy’s deepest heart, she realizes her own dark secret: she is the exception. Next, she discovers to her horror that her secret, if known, could result in the ultimate punishment—genital mutilation.

To save her body and even her soul, Gypsy chooses a dangerous path—to single-handedly confront this scary and absurd world. She has the support of her allegiant sister Sadie and Miles Devine, a rogue, secretly gay crusader, and also “Doctor,” a morally questionable physician to help her. But none of them fathom the levels of paradox, incongruity, and twisted evil they will soon face, and the ride becomes something even Gypsy could have never imagined.

Disclaimer: The Willing may contain triggering and/or sensitive material. Sexual violence, human trafficking, sexual assault and abuse are topics mentioned in the book.

Review:
“The Willing is an unusually deep commentary on a malignant dysfunction in our society, dressed in fishnet utopian stockings. While the premise and its sensual details push the boundaries of belief, a community that is ostensibly focused on the greater good but is governed by fear and hypocrisy fits perfectly in the dystopian genre. Gypsy's character is flawed and immature in many ways, but her shield-like honesty is refreshing among a sea of conformists. A rather feminist piece filled with satire on the state of equality, The Willing is weighty and serious in its message, and sad in its reflection of how women are treated in our modern world. For a change from the norm, Lindsay Lees provides a gripping story that will have you thinking deeply about the importance of the relationships in your life.”--Jennifer Jackson IndiesToday.com

REVIEW
*I received a free copy of this book which I voluntarily chose to write an honest review for.
This is definitely an intriguing book. Less creates a dystopian world where women are raised to sacrifice their bodies in the interest of the greater good. Written to highlight human trafficking we get a story that will break your heart as we follow along. Makes for a dark and twisted read as we immerse ourselves in this world. Not for the faint of heart. I really liked it so I give it 4/5 stars.

Lindsay Lees is originally from Los Angeles. She holds dual citizenship in the United States and the United Kingdom, and while growing up and later in college, she split her time between the two countries.

Lindsay earned a B.A. in 2008 from Manchester Metropolitan University, and next an M.F.A. in Creative Writing from California College of the Arts. The Willing is Lindsay’s debut novel. She currently lives a quiet Southern life with her husband and a houseful of pets.