Book Blitz for A Vampire's Heart by Marie-Claude Bourque 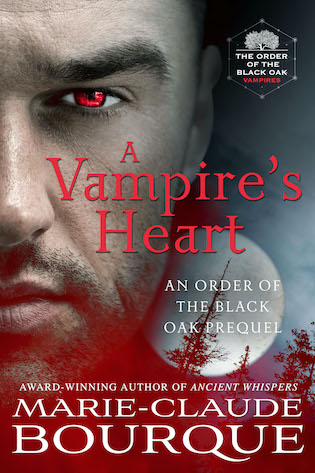 Meet the Order of the Black Oak: a powerful order of modern-day warriors fighting evil to protect the ones they love.

To prove her worth as a leader to her coven, awkward witch Maisie Thibodeau must battle a horrible monster in front of the whole supernatural community. But the White Holly sorceresses are not the only ones watching.

Immortal Valerian St-Amand can’t tear his eyes from the small but powerful witch as she battles a dangerous troll set on her small mystic town. While he had vowed not to interfere in witches’ business, his unexpected fear for her life makes it impossible for him to keep his distance.

If you love loyal tough guys with hearts, steadfast heroines and satisfying slow-burn paranormal romance, the Black Oak World is for you.

Please Note: While each novel in this series ends with a satisfying HEA, the romance in this prequel leaves you with a Happy-For-Now ending to be concluded in the first book of the Vampires of the Black Oak series.

Praise for A Vampire’s Heart

“These Immortals surrounded by powerful witches promise exciting adventures full of danger and romance. Just the way I like them.” ~ Goodreads Reviewer

“This prequel is so good, it left me wanting more.” ~ Bookbub Reviewer

“It was so good to be back in the world of these characters. It felt like a warm bath. Assuming a warm bath has drama, heat, things to prove and intrigue, that is.” ~ Goodreads Reviewer

“What a great lead-in to book 1 in this series! Definitely got to re-read that!” ~ Bookbub Reviewer

“Hey, it’s her!” Mag elbowed him as the pub’s door opened, letting some fresh air in.

“Who?” Val frowned as he continued to scan the room, casting a brief nod at the waitress bringing them their drinks.

“The girl from the shop,” Mag explained with eagerness.

Val reluctantly looked to see what made his brother so enthusiastic. The young witch from the craft store stood there, a small figure in an anime logoed t-shirt, plain jeans, and faded sneakers. Her poker-straight black hair fanned against her cheek and down to her chest.

A little geeky, but yes, there was something about her. He felt a kinship in her awkwardness. She, too, didn’t seem to want to be there.

She perused the crowd, waved at a few people, before settling her eyes on him.

His breath remained caught in his throat as her gaze of the deepest jade connected with his own. The contact disturbed something in him that had been dormant for centuries.

The strange force stirring within him had gone straight to his core. His heartbeat pounded madly as a flush of warmth spread down to his groin.

Oh damn. Val instinctively searched for Sasha, who was vigorously lapping water from his bowl at his feet. He couldn’t remember ever feeling anything so intense before. He shook himself as he sunk his fingers into the fur of his loyal companion. This could mean trouble.

“I wonder if I should hit on her,” Mag was saying.

Val moved his head bleakly as she broke their connection to survey the bar with her head held high before waving with animation at a group of women at the back.

“Sure, why not.” He let out a slow exhale, his pulse now steadier, and leaned further back in his chair. He forced himself to look away from her and continue to study the patrons. But he couldn’t shake the feeling that this young witch was something else.

And with his entire being, he strongly prayed that Mag would leave this one girl alone. 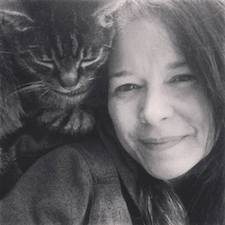 Marie-Claude Bourque is a Montreal-born Seattle-based author of slow-burn paranormal romance and the winner of the American Title V award with her first novel ANCIENT WHISPERS.

Happily Ever After always absolutely guaranteed!