1)      Tell us a little bit about yourself--both something we learn from [the story] and something that readers might not guess?

I’m a former investment banker who decided to quit my job and sell my home in Richmond, Virginia to pursue my lifelong dream of owning a literary café and catering business. I now live in Hobson Glen – a small town just to the north of Richmond – and own Cookin’ the Books Café. Cookin’ the Books specializes in literary-themed recipes and menus. So, if you want a Paddington Bear themed birthday party for your toddler or a Great Gatsby- inspired lawn party, I’m your gal! The café also serves literary-themed dishes, such as The Grits of Wrath  and the Zelda Fitzgerald fried chicken and pimiento cheese sandwich. The café also has its own lending library for those who like to read while they eat.

I’ve also seemed to have unearthed a skill for sleuthing. I think it’s the food. When I feed them, they open up and talk to me. I learn all sorts of things that way, but I turn the information in to the Sheriff, of course.

It’s been quite exciting, starting the business and helping solve murders, but it’s completely cut into my reading time. Perhaps once the business is established and people in this town stop killing each other, I’ll be able to take a long vacation. I’ll go to some cooking schools during the day and read at night, with a margarita. Or two.

Strangely enough, my writer initially developed me in response to a call for a veterinary mystery. She named me Pippa and gave me long dark hair, like a horse mane. Can you believe it? I much prefer my shoulder-length blonde bob, thank you very much! Fortunately, the veterinary mystery didn’t take off, so my writer revamped it to reflect her own passion for cooking. I’m very thankful since I can’t imagine spending my days giving dogs deworming pills or trimming cats’ claws.

Sure, although she’d tell you her life is fairly boring. Most of her time is spent in front of a computer with a cat on her lap. The rest is spent cooking, cleaning, watching movies

with her husband, and exploring her new home. She and her husband live in Bristol, England, actually. They moved there two years ago, which I find exciting, since I got left behind here in Virginia. Maybe I’ll visit her someday, although THE GARDEN CLUB MURDER features a proper English tea/picnic menu inspired by The Secret Garden, I’d love to devise another menu inspired by English literature.

To be perfectly honest, because it’s crazy. I mean uprooting my life at age… forty-something. Starting a new business. Interviewing murder suspects. Exposing killers. All the while serving up breakfast, lunch, tea, and the occasional banquet meal is a bit over-the-top, don’t you think?

Oh, that has to be my best friend, Julian Jefferson Davis, aka, Jules. He’s so unpredictable, yet funny and sweet. There have been times when he’s made me want to pull out my hair, like during this past case, but I love him!

I like everyone in Hobson Glen, actually. Everyone’s made me feel genuinely welcomed here. That said, Enid Kemper, the town eccentric, can be difficult at times, but that’s only because she’s elderly and all alone in the world, save for her parrot, um, excuse me, green conure, Langhorne.

Well, autumn is nearly here, so Christmas is right around the corner. I’ll be busy serving up food at the Hobson Glen Annual Holiday Fair. It’s quite an event, I hear. Rides, dancers, craft vendors, Santa, and the Williamsburg theatre Group will be putting on performances of Charles Dickens’ A Christmas Carol during the day and Shakespeare’s Twelfth Night in the evenings. I’ve partnered with our local library to create menus to accompany the plays and to distribute miniature storybooks in the children’s boxed meals. I’m really looking forward to it.  I just hope the weather holds out and that no one gets killed!

About The Garden Club Murder 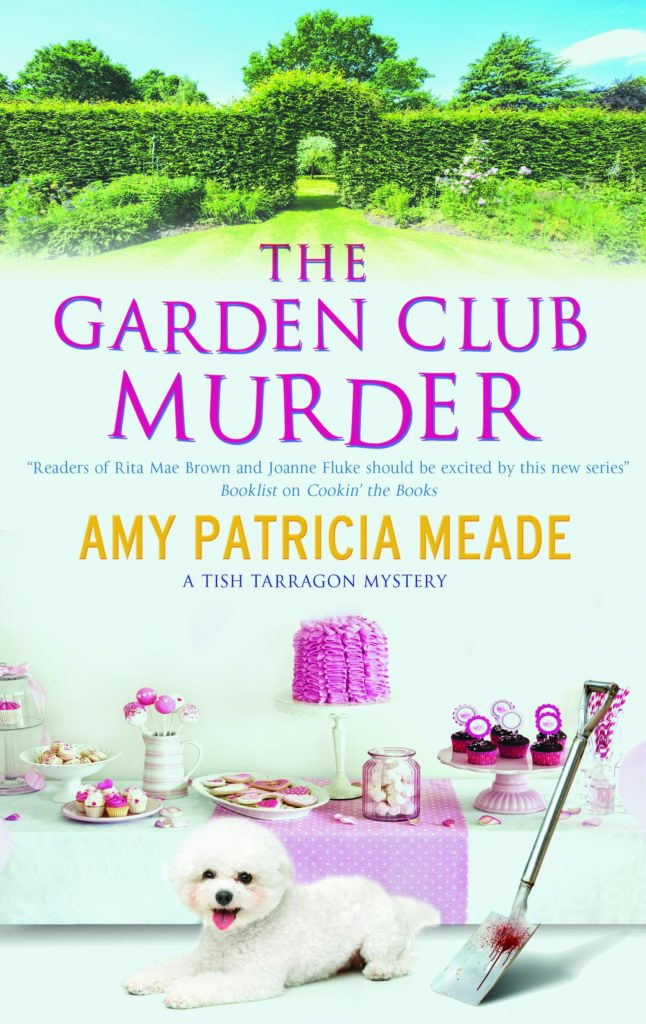 Literary caterer Letitia ‘Tish’ Tarragon is preparing her English Secret Garden-themed luncheon for Coleton Creek’s annual garden club awards, but when she is taken on a tour of some of the top contenders with the garden club’s president, Jim Ainsley, Tish is surprised at how seriously the residents take the awards – and how desperate they are to win.
Wealthy, retired businessman Sloane Shackleford has won the coveted best garden category five years in a row, but he and his Bichon Frise, Biscuit, are universally despised. When Sloane’s bludgeoned body is discovered in his pristine garden, Tish soon learns that he was disliked for reasons that go beyond his green fingers. Have the hotly contested awards brought out a competitive and murderous streak in one of the residents?

REVIEW
*I received a free copy of this book which I voluntarily chose to write an honest review for.
This is my first foray into this author's work but it will not be the last. We get a well developed character in Tish as she goes about preparing for an upcoming catering event. The annual Garden Club awards banquet is coming fast and they are using an adorable theme centered around the English Secret Garden novel. The food sounds amazing to say the least and along with the descriptions of several of those we get a range of other characters that are sure to fit all readers in some way or another due to their diversity. Together they make for great story that starts with a tour of the best ranked gardens. Things are going quite well until they arrive at the final one only to stumble across the owner murdered in the middle of it. Makes for an intriguing investigation though as Tish starts looking into matters while still trying to make the event go off without a hitch which they do in a spectacular manner. Surprising ending as well covering several areas that I did not see soming to say the last. Makes for a fun read the will have the reader engrossed while making them hungry  yet wanting to garden all at the same time. The diversity was quite pleasant. I really liked it so I give it 4/5 stars. 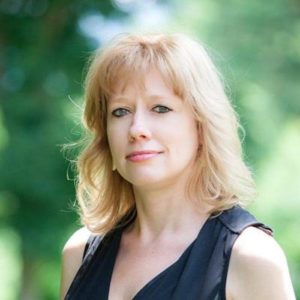 Author of the critically acclaimed Marjorie McClelland Mysteries, Amy Patricia Meade is a native of Long Island, NY where she cut her teeth on classic films and books featuring Nancy Drew and Encyclopedia Brown.
After stints as an Operations Manager for a document imaging company and a freelance technical writer, Amy left the bright lights of New York City and headed north to pursue her creative writing career amidst the idyllic beauty of Vermont’s Green Mountains.
Now residing in Bristol, England, Amy spends her time writing mysteries with a humorous or historical bent. When not writing, Amy enjoys traveling, testing out new recipes, classic films, and exploring her new home.