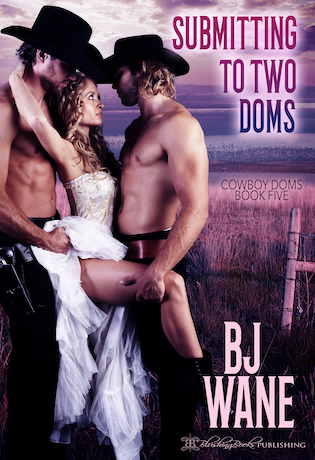 
It was meant to be an affair…
After Kelsey is assaulted, her FBI foster parents plead with her to spend a few weeks with their friends in Montana while they investigate the incident. Since she would do anything for them, she grudgingly agrees, wondering how she will pass the time on a ranch in the middle of nowhere without going stir crazy. As soon as she catches sight of her two hosts, Greg and Devin, she figures: what better way to take her mind off her troubles than with an affair with one of them?
Ex-FBI agents Greg and Devin vowed never to get personally involved with another woman under their protection after their last case ended in tragedy. When their former boss asks for their help, the two best friends butt heads over how to answer him. But what with the insecurity reflected in Kelsey’s blue eyes, the desperation behind her flirtations, and discovering her submissive side, both men find themselves succumbing to the petite blonde.
While Kelsey basks in the dominant attention of both her cowboys, she continues to insist she can’t wait to get back to her life in Philadelphia. It isn’t until the threat against her is verified, the truth comes out about her past, and a few disturbing mishaps occur that Greg and Devin step into full protection mode, vowing to keep the woman they’d both grown to care for safe. And not until after the guys save her life, freeing her to return home, does Kelsey realize home really is where the heart is, and hers is in Montana with her two cowboys.
This is book five in the Cowboy Doms series, but reads as a standalone.

Goodreads / Amazon / Barnes & Noble / iBooks / Kobo
—
EXCERPT:
If possible, Devin would slam the sliding back door shut as he followed his soon-to-be ex-friend and partner outside. He was so annoyed with Greg for answering Jordan McAllister’s call he didn’t even spare an appreciative glance toward the two young women enjoying the bubbling hot tub. The nip in the air, a hint fall was sneaking up on them fast, did nothing to cool down his hot temper.
“I’ll have to discuss it with…”
“No,” he interrupted Greg, refusing to hear what favor their ex-government boss wanted from them.
Greg glared at him but his annoyance didn’t come through his smooth reply. “Yeah, you heard right, but if I agree, he can just ignore her. I need to think about it. I’ll call you back in the morning.” He ended the call, leaned against the rail and crossed his arms. Looking toward the hot tub, he stated with polite firmness, “Give us a few minutes, please.”
“Sure, Master Greg.” Mindy, a regular at the club, and her friend, an attractive redhead Devin didn’t know, both stood and stepped out of the heated water.
Devin snatched two towels off the bench and tossed them over to them, the water sluicing down their naked bodies distracting him for a moment. He might be pissed, but he wasn’t brain dead. He waited until the door closed behind their towel-wrapped forms before rounding on Greg again, who still lounged against the rail, giving him that look, the calm under the surface but annoyed mien Devin knew only too well.
“We retired early for a reason,” he reminded Greg, moving to stand next to him, facing the night-shrouded trees several feet from the deck as he leaned his forearms on the post. “We swore we were done, and agreed to start over without looking back, without regrets.”
“And yet the regrets are still there.” Greg sighed and ran one hand through his wavy reddish/brown hair. “You recall the foster kid Jordan and Theresa took in, the young girl they talked about?”
“No.” But of course, he did. He remembered way too much of his years as an agent. Jordan had once shown him a school picture of the cute blonde whose large blue eyes dominated a small face.
“Stubborn ass. Anyway, she’s in need of a safe place to hang for a while after an attack at a job site. They’re asking us to take her in until they know what’s going on, if she was the target or just in the wrong place at the wrong time.”
Devin shook his head. “No. They can find someone else.”
“It’ll only be for a few weeks,” Greg persisted. “And we’re about as far off the grid from Philadelphia as you can get.”
Pushing off the rail, he leveled an angry glare toward his best friend. “No, and God damn it, you know why.” He turned and took two steps toward the doors, intending that to be the end of it since he refused to go down that road again.
Greg’s next words halted him with his hand on the knob. “I’m thinking of saying yes.”
Devin looked back and replied coolly, “You do that, but leave me out of it.”

Author Bio:
I live in the Midwest with my husband and our dog, a lovable Great Pyrenees/Standard Poodle. I love dogs, enjoy spending time with my daughter, babysitting dogs and kids, reading and working puzzles. We have traveled extensively throughout the states, Canada and just once overseas, but I now prefer being a homebody. I worked for a while writing articles for a local magazine but soon found my interest in writing for myself peaking. My first book was strictly spanking erotica, but I slowly evolved to writing erotic spanking romance with a touch of suspense. My favorite genre to read is suspense.