I’m grounded again. This time, it’s ‘cause my dad says I don’t understand boundaries. Hello! I’m eleven! I’m supposed to break rules. It’s not like I break them in a bad way. I’m like trying to help solve the latest murder. That’s totally what an investigation is. Right? But instead of my dad understanding that, he says I’m sticking my nose where it doesn’t belong. C’mon, really? My dad consults with the cops. Why can’t I?

Our handyman says you have to have an angle when you’re trying to get people to see things your way. That sounded like a super smart idea, so I figured I could write a profile about our new town deputy and ask her about the murder investigation. Daddy shut that down right away. He totally saw through it. I was sure the idea would work. It’s not like I don’t have experience—I’ve written stuff for the Cove Talkers Newsletter before. My dad calls it a gossip rag, but Seaside Cove is super small and we don’t have a lot of real news. Well, except for when there’s a murder.

My dad did say I could try to find out if the captain really had a treasure map like he said he did. For sure Daddy thinks looking for the missing map is gonna keep me away from the murder. But if I’m right and the motive was to find the missing map, this could totally be what I need. I’ll bet I can find the killer kinda by accident while I’m looking for the map. I’ll have to do some stuff undercover, but that’s okay, I totally work outside the box, which is why I’m a better crime solver. And usually grounded.

Now that I figured out how to solve the murder, I totally need one of those get out of jail free cards. Wonder where I can get one of those for real?

About Secrets of the Treasure King 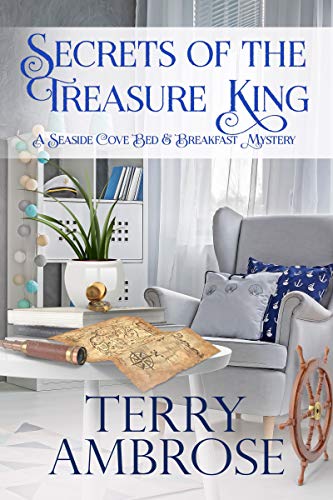 The Seaside Cove rumor mill is buzzing about the captain of The Treasure King. He claims to know the location of the San Manuel, a four-hundred-year-old sunken Spanish galleon with a cargo worth millions. And now, he’s dead, the victim of a speargun attack.


When the police ask B&B owner Rick Atwood to consult in the investigation, he has mixed feelings. Consulting for the police is not the problem. He’s done it before. The problem is his eleven-year-old daughter, Alex.


Alex is fearless, precocious, and fueled by a strong sense of girl power. She’s also convinced the cops will never find the killer without her help, so she launches her own investigation—and quickly becomes a candidate for Seaside Cove’s youngest felon.


Now, unless Rick can solve the case with the clues Alex found illegally, his daughter might face charges of breaking-and-entering, the treasure of the San Manuel will be lost to pirates, and a killer could get away with murder.


Welcome to another fabulous adventure with Alex and Rick. The B&B is doing well and Rick is happy about that. Alex is looking forward to spring break especially when she hears about a big ship that has shown up in the harbor. She goes to look at it with her friends only be shooed away by the adults after an argument with the Captain. On previous visits he has caused lots of drama so the kids are forbidden from being near him or his crew. This spikes Alex 's investigative spirit making her look into things and then the Captain goes missing only to be found dead later. Rick is asked to help look into things while he tries to keep his daughter out of it. Well of course this does not stop her instead it gives her a challenge to overcome. Overall an adventurous mystery with two sides giving us something for everyone. Treasure hunting always brings out the best and worst in people making for a great layered story. Perfect for fans of cozies. I really liked it so I give it 4/5 stars.