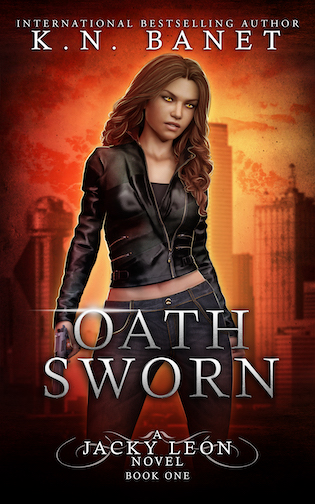 
Jacky Leon isn’t someone who goes looking for trouble. She owns a bar, pays her taxes, and serves her drinks cold outside a small town in Texas. The fact that she’s a werecat is just something she’s had to live with. Alone in her territory, she’s lived a secretive life for six years: under the radar, avoiding her past and the baggage that comes with it.
Trouble finds Jacky, though, in the form of an eleven year old girl and a werewolf turf war just outside her borders. Forced to honor an ancient treaty and the Laws of the supernatural world, Jacky swears an oath to protect Carey Everson, the human daughter of a local werewolf Alpha from Dallas.
When his enemies come after Jacky and her charge, she’s going to have to embrace the more dangerous side of who and what she is. She’s going to have to challenge the very Laws that govern her kind.
And nothing is going to stop her from honoring her word.

Goodreads / Amazon
—
Only 99¢ for a limited time!
—
EXCERPT:
I waited for her to load in, then went to the back door, keeping my eyes down respectfully. I couldn’t pose a threat to them now, not if they were taking me to the wolf I needed to see.
“You were prettier in the pictures, Jacky. Less…battered.” His voice was like a smooth brandy, somewhat chilled, and very secure, brimming with an arrogant element of confidence. I looked up to see the wolf next to me and found myself looking into the grey-blue eyes I already knew well.
Heath Everson was right next to me, and he didn’t look pleased to see me.
“Where’s my daughter?” he demanded.
I sat stunned for a moment. There were a couple of problems that kept me from getting my brain to function properly.
One, I wasn’t used to the power that filled the air around me. This wolf was powerful. It was in his scent. It was in his posture, leaning back half against the seat and half on the far door, with one arm stretched out over the back, which he could use to grab the back of my neck if I wasn’t careful. He’d positioned himself carefully, with his long legs stretched out into my leg space, an obvious play that I had no personal space he cared to respect.
Two, he was disarmingly good-looking. He hadn’t seemed like that in the pictures I had seen of him, quietly sitting in the back. His smiles in those had been soft. The one I was confronted with was sharp. He wasn’t a rugged man like most werewolves I’d seen. He was classically beautiful, with a sharpness that made me uncomfortable. The only thing about him that wasn’t styled to perfection was his hair, which looked like he’d run his hand through it too many times. It fell over his face, framing his dastardly grey-blue eyes. And that was all before I got to his broad shoulders, encased in a crisp black suit. He didn’t look like a man who was fighting for his life. Not in the slightest.
Three…well, it was time for me to tell him that his daughter was taken from me, and I was pretty certain he would try to kill me after that.
“Start talking, Jacky.” He didn’t remove his eyes from me as the SUV got moving. 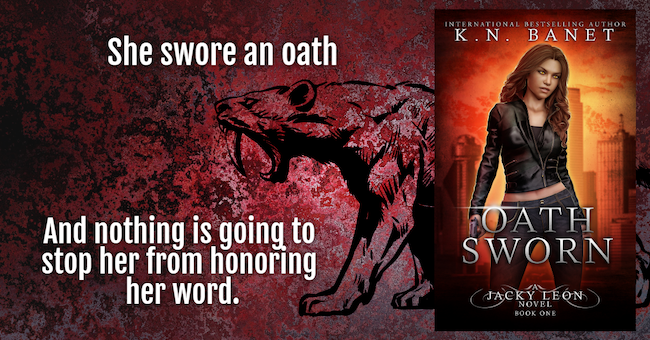 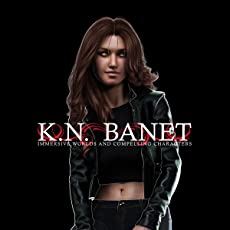 
K.N. Banet loves to read books that make people cry. She likes to write books that make people cry (and she wants to hear about it). She's a firm believer that nothing and no one in this world is perfect, and she enjoys exploring those imperfections--trying to make the characters seem real on the page and not just in her head.
She might just be crazy, though. Her characters think so, but this can't be confirmed.
You can find her reverse harem works under Kristen Banet!
Check out her social media to catch what's going on in the worlds inside her head. She drops teasers, new covers, and opens ARC reader slots through her Facebook group, The Banet Pride.