Sale Blitz for Code of Silence by Shantell Tessier 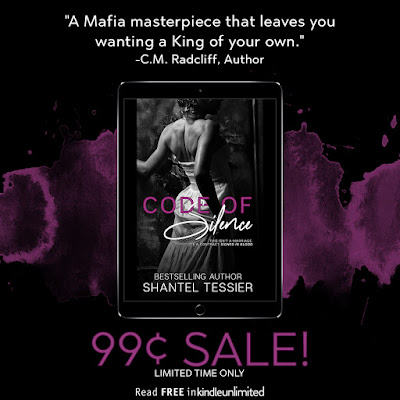 "Deliciously dark and devious. This book is one of Shantel's finest works yet!" - CoraLee June, bestselling author

Code of Silence, a must-read standalone dark romance from Shantel Tessier is ON SALE now!

Those words describe my future husband. Who just so happens to also be my ex-boyfriend.

It’s complicated. Two years ago, he broke my heart when he left me to do his father’s bidding. After months of crying, I finally accepted he was gone and wasn’t going to look back. That maybe he’d never loved me at all. I never wanted to see Luca again.

Now a cruel twist of fate has signed me over to him in a heartless deal. I’m his. He thinks he did me a favor, but I feel like I’ve been given a death sentence. He doesn't want to get married because he still loves me. No, he did it for money. More power.

I’m going to be a mafia wife. And there’s only one way out of it. Death.

But as it turns out, someone else doesn’t want me to marry the ruthless Luca Bianchi. And if he has his way, I’ll see that early grave.

Due to mature content and themes this book is recommended for readers aged eighteen and over. Code of Silence is an arranged marriage and a complete standalone. This novel may contain triggers.
Posted by Books a Plenty at 8:56 PM