1)      Tell us a little bit about yourself--both something we learn from [the story] and something that readers might not guess? I’m not a good cook. I agreed to take lessons from Scott Thompson, manager of the Redwood Cove Community Center, who prepares gourmet food. Considering the disasters I’ve created in his kitchen, I think he’s a brave man to continue to offer to teach me. I have no idea how long it took him to get all the flour out of his hair from the apple pie escapade. I knocked over a container of flour and when I grabbed it, I accidently tossed the contents into the air. Scott was the recipient of a “flour shower.” Something readers wouldn’t guess is that I love to read mysteries. I’ve been so busy since I became manager of Redwood Cove Bed and Breakfast that I haven’t had time to read one in a while.

2)      How did you first meet your writer? Janet Finsilver, my writer, was riding a horse at a ranch in Wyoming. She brought me into her life after meeting one of the owners and wanting to have someone like her in her books. I became her main character in Murder at Redwood Cove, the first book in the Kelly Jackson mystery series.

3)      Want to dish about him/her? Well, let’s see. Recently she’s taken to having a small piece of milk chocolate with her coffee in the morning. She was mumbling something about gaining weight the other day, so I don’t know if she’ll keep doing that. Just now she was chopping an onion to use in a soup recipe. Her eyes really burn when she cuts them so she wears goggles. Between you and me, she looks pretty funny. I’m surprised her two dogs don’t bark at her!

4)      Why do you think that your life has ended up being in a book? I have the qualities that Janet wanted her protagonist to have. I care deeply for my friends and will be there for them. I love animals and will always go out of my way to help one in need. I ride horses and Janet enjoys going with me on my fictional rides.

5)      Who's your favorite character? Why? I don’t have a favorite character. I like all the people in my life at Redwood Cove. I do spend quite a bit of my time with the crime-solving group of seniors, the Silver Sentinels. Whenever there’s a problem in the community, we put our heads together to fix it. I love working with them! I also have a special place in my heart for Tommy, a young boy whose mother works at the inn, and his Bassett Hound, Fred. You learn more about them both in Murder at Redwood Cove and the rest of the books in the series.

6)      Who's your least favorite character? Why? I don’t have anyone in the books as a repeat character that I don’t like. I’ve definitely run into a few people as we were solving crimes that I’m glad I won’t be seeing again.

7)      What's next for you? I’m not sure. Janet puts festivals and events in her books that are based on ones she’s attended in northern California. A couple of years ago she went to a fundraiser for the Mendocino Music Festival. It was one of the experiences she used as inspiration for the event in Murder in the Wine Country. She loved going to the Mendocino Music Festival and hasn’t used that in one of her books. The Fourth of July parade the town puts on has some unusual aspects to it, and she had fun at that a while back. She’ll probably use one of those in her next book. Whatever she chooses, I’m looking forward to being in it and seeing my friends again!

About Murder in the Wine Country 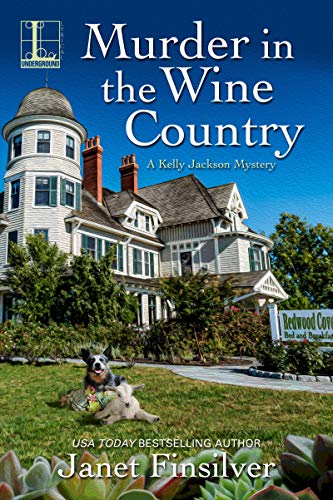 Murder in the Wine Country (A Kelly Jackson Mystery)

Weeding out killers wasn’t part of the job description . . .

Kelly Jackson, manager of the Redwood Cove Bed and Breakfast, is excited to participate in an event to raise awareness for the plight of struggling veterans in their Northern California coastal community. Local wineries are sponsoring tastings, and to prepare for a culinary competition, professional chefs will forage for wild edible greens. Kelly plans to come along, despite a warning to beware of poachers, who have been stealing the highly valued succulent Dudleya farinosa. The senior sleuths who call themselves the Silver Sentinels join forces with environmental activists known as the Succulent Saviors to thwart the poaching operation. When a consultant for the sale of a local winery is murdered, the poachers are suspected—but so is a wine merchant, Kelly's friend Phil. As Kelly and the Silver Sentinels attempt to root out the real killer, what she digs up might just put her permanently underground . . .

What a great addition to this book wonderful cozy mystery series! Kelly is all excited for an upcoming event that will have a wide range of activities. One of them includes foraging for edible ingredients but they all receive a warning about poachers in the area after a rare yet valuable plant. As if that is not bad enough during their first excursion they are met by a group that claims to be protecting the area only they come off rather intimidating instead. Hoping for the best the itinerary moves forward until a consultant for the sale of a winery is found murdered making both the group and a wine merchant the main suspects. Kelly knows the merchant so she starts investigating in between her duties at the B&B as well as the events. What follows is a fantastic blend of food, wine tasting, clues, and a variety of characters that create a story readers can really love. A must read for fans of cozy mysteries. I totally loved it so I give it 5/5 stars.

Janet Finsilver is the USA TODAY best-selling author of the Kelly Jackson mystery series. She worked in education for many years as a teacher, a program administrator, and a workshop presenter. Janet majored in English and earned a Master’s Degree in Education. She loves animals and has two dogs—Kylie and Ellie. Janet has ridden western style since she was a child and was a member of the National Ski Patrol. One of the highlights of her life was touching whales in the San Ignacio Lagoon. MURDER AT REDWOOD COVE, her debut mystery, was released on October 13, 2015. Five books followed with her most recent release on April 28, 2020, of book six, MURDER IN THE WINE COUNTRY.
Janet Finsilver and her husband reside in the San Francisco Bay Area. She enjoys cooking, and a recent attempt to reduce the number of cookbooks in the cupboard wasn’t very successful. She’s an avid reader—of course!
Please feel free to visit and/or contact me on my author Facebook page and my website. https://www.facebook.com/janetfinsilverauthor/ http://janetfinsilver.com/