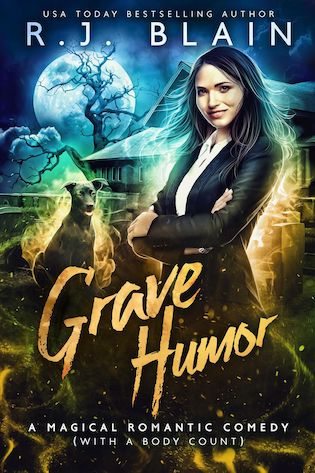 
Most days, Anwen regrets working at a funeral home despite the good pay. With the residents no longer inclined to stay in their coffins where they belong, she’s got her hands full making sure everyone follows the rules:
In the funeral home, there is no screaming, no murdering, no mutilation, no possessions, no kidnappings, no resurrections, and no cursing of any type. Be quiet and stay polite.
The day Old Man McGregor decides to take a walk and disturbs her peace, Anwen learns there’s a lot more to the basement in the funeral home than a vampire and a handsome gentleman on ice.
If she’s not careful, she’ll learn first-hand why ‘eternally yours’ is the most potent of threats.
Warning: this novel contains romance, humor, bodies, shenanigans, and mythological puppies. Proceed with caution.

Goodreads / Amazon / Barnes & Noble / Google Play / Kobo
—
EXCERPT:
Lemon smelled so much better than rot. As far as the restless dead went, Old Man McGregor hadn’t left me with too much of a mess to clean. He’d stayed mostly intact, limiting his oozing to a spot here and there. It took me twenty minutes to erase the evidence he’d gotten out of his coffin and taken a walk.
Five minutes later, Direct Hammel and his merry band of somberly dressed assistants arrived. Why did Direct Hammel need four men to stand around? Most viewings, even the big ones where the whole town showed up, only needed two attendants. The rest of the time, I could handle the work without any help at all.
While the viewings sometimes had upwards of the town’s full three hundred people, I couldn’t think of a single funeral with more than twenty attendees since I’d started working at the place. The old stayed, the young left, and with a world full of magic to discover, who wanted to stay in Sunset, Alabama? If my college fund hadn’t been bled dry on drugs and hookers, I would’ve been on the first bus out along with the other six seniors in my class.
“Any problems?” the director asked, sniffing the air.
I bet he smelled the lemon and wanted to know why I’d been cleaning. “No problems,” I replied. Any other day, Old Man McGregor rising and coming out of his coffin for a chat would’ve counted as a problem, but I was too worn and tired to care. Like with all things, problems were relative. If the restless dead hiding in his coffin decided to cause a problem, I’d back up and watch the fireworks. “I finished my other work for the morning, so I cleaned to make certain everything was ready for the viewing, sir.”
“Good job. Our clients will arrive soon. We’ll handle the rest from here. Mr. McGregor’s family is rather conservative, so if you could handle inventorying and cleaning the preparation and refrigeration rooms, that would be useful. Otherwise, go home.”
I didn’t need a diploma to read the writing on the wall. If I went home, I wouldn’t be invited back to work, which meant someone hadn’t done their job cleaning the basement.
The funeral home went through inspections once a month to keep its license, and we were due to have a government worker poking around the place. Plastering a smile on my face, I nodded. “I’ll be downstairs if you need me, sir.”
“Good. Call the main line if there are any problems.”
Once again, I read the writing on the wall: if I had any problems during the viewing, I would be in need of a new job.
I struggled to maintain a neutral, professional expression. To keep guests from wandering into the restricted parts of the funeral home, Director Hammel locked the stairwell door and turned off the lift. I’d spend the next six hours in the basement. After the surge of restless dead and corpse possessions, the funeral home boasted reinforced lower level walls and doors, fashioned of a mix of concrete and steel to keep the bodies contained should they decide to get up and take a walk.
Fortunately, excluding Old Man McGregor, we only had two bodies in storage, and John Doe had been in our freezer since before I’d been born. If he decided to get up, they’d hear my screams in the next state. While the rules kept changing, one thing stayed the same: the older the corpse, the stronger the undead it became. I hadn’t seen Mr. Doe, but I sometimes heard Director Hammel talk about him in hushed, fearful tones.
Nothing scared Director Hammel except our John Doe.
The other body we had didn’t worry anyone; the vampire wasn’t going anywhere until someone reattached his limbs and revived him with a lot of blood. I wasn’t sure why we kept the vampire on ice, but someone from the CDC came once a month, along with the funeral home inspector, to make sure he remained as alive as an undead got. I’d gotten to take a look at the vampire, as Director Hammel wanted to make certain I knew to avoid the sleepers in the freezer.
All in all, I didn’t care about either corpse. Unless I put my throat to the vampire’s mouth, he couldn’t hurt me. As for John Doe, I wasn’t sure what I thought about him.
While I wanted to curse over my foul luck, I kept smiling, grabbed my purse and coat, and descended into the basement. I made it all of two steps before the lock clicked behind me.
“Asshole,” I muttered, shaking my head and reaching for switches. I flipped three of the five, bathing the stairwell and landing below in a yellowed light. The stench of embalming fluid burned my nose, and I turned on the ventilation fans so I wouldn’t suffocate before the end of the viewing.
When I found out who had left the basement a reeking hell hole, there’d be a third body in the freezer. In prison, I could study and pretend I had a future, and I’d do so on the government’s dime until they kicked me out and made me finish my term doing community service. Curling my lip in a snarl, I stomped down the steps and aimed for the disposal bin meant for the latex gloves. I caught it with my foot and launched the damned thing through the open doorway.
It crashed onto the metal table bolted to the preparation room floor.
“What’s the fucking point of having a three-inch thick containment door if it’s open all the time? I’m surrounded by brain-dead idiots.”
“Yes, you are,” a husky, deep voice replied. “I was wondering who they’d sacrifice to me first. I knew the scarecrow would hide, but I thought he’d betray the whiner first. How disappointing.”


RJ Blain suffers from a Moleskine journal obsession, a pen fixation, and a terrible tendency to pun without warning.
In her spare time, she daydreams about being a spy. Her contingency plan involves tying her best of enemies to spinning wheels and quoting James Bond villains until satisfied.