Book Blitz & Giveaway for Keep Me In Sight by Rachel Blackledge 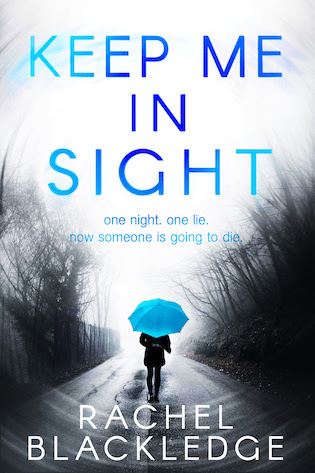 One night. One lie.
Now someone is going to die.
It’s about Dan.
These three words jolt Brynn Masters back to the big boozy night she spent with her boyfriend, Dan. The very same night his ex, Erin, showed up. Erin says something terrible happened that night. Dan says he never touched her. Trouble is, Erin has evidence to prove it.
Brynn can vouch for him though. She was there that night she can hardly remember, but will never forget. Except, when Brynn pieces together her fractured memories, lost that night at the bottom of a bottle, she faces the horrifying possibility that maybe Dan isn’t completely innocent. Maybe he’s guilty as charged. As Brynn inches closer to the truth, she begins to wonder: Who is the predator? And who is the prey?
Gloria knows. She’s a psychic who turned her back on her ability long ago, after she failed to prevent a terrible tragedy. As her gift floods back to her, can she learn to trust herself again before it’s too late? Or will her painful past hold her back from saving someone’s future . . . and quite possibly their life.
This addictive and suspenseful thriller explores the fault lines between broken memories and shattered trust, and promises to keep you up well past your bedtime.

Add to Goodreads
—
EXCERPT:
INMATE 6881
Initials mar the bench of the holding cell, a sea of letters scratched into the paint by the forgotten ones, marking their existence.
So and so was here. There’s a lot of gang insignia, too. I see a skull done up quite nicely. That person had some talent. Wasted, clearly.
Keys clank against the metal gate. Wanda stands there, sliding a key into the slot and twisting. She’s one of the nicer guards, which is why she works in the out-processing unit.
Her uniform strains against her bulk. The heavy-duty leather belt cinched up tight sections her belly into top and bottom folds. She’s an older woman, approaching retirement, I hope. What an awful place to spend her golden years.
“Case dismissed.” She pushes the gate open, looking me up and down. “Let me take a picture. It’s not often I see a murderer walk free.”
“Murderess,” I say, rising to my feet and straightening my prison issue garb. I smooth back my hair and walk freely out of the holding cell.
“‘Scuse me,” she says, following me down the barren hallway. “They all come in here howling about how they’re innocent little lambs. And the justice system has done them wrong and they deserve to be set free. Except none of those smart lawyers on the outside can never seem to find a single reason why.”
I’m thinking about all the unfortunates who lack the ability to plan the perfect crime. Poor them.
Behind me, Wanda labors for breath, a wheezing sound that keeps time with her footsteps. Then we reach the last gate before freedom, the last time I’ll be referred to as an inmate number.
“What’s your secret?” she demands in a low voice, hand grasping the bars of the sally port door in front of us. “I saw your case file. You killed that guy deader than a doornail.”
My gaze passes from the pockmarked metal bars to her fleshy hand, wrapped around the bar, knuckles rising up in soft mounds.
I recall Chris’s hands wrapped around my neck, his nostrils flaring, his lips stretched across the tidy white line of his teeth. Then I remember the gleam of my knife before I sank it in his belly.
“Foresight,” I say with a wry smile. She smiles too, an involuntary reaction, but I can tell from her quick sideways glance that she’s confused, trying to work out the meaning. While her wheels are turning, I nod toward the gate. “Shall we?”
I retrieve my articles, stored the night they processed me into general. No probation or bail for me. No way. A female killer? The authorities didn’t want to take their chances, rare as we are. Women are supposed to be peaceable, not violent. What had driven me to kill?
Until they knew, nobody wanted the responsibility of authorizing my release. And who can blame them? Nobody wanted to face the possibility that it could happen again.
But it just might.
In fact, I wouldn’t rule it out. 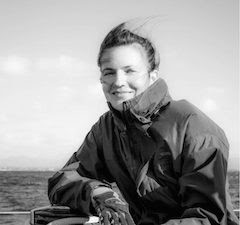 
An American ex-pat since 2008, together with her husband, Rachel has sailed over 11,000 nautical miles, crossing the Indian Ocean three times and sinking only once. She hung up her foul weather gear since the birth of her son. And writes thrillers now instead.